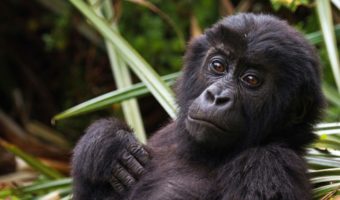 The Eastern lowland gorilla (Gorilla beringei graueri) is found only in the tropical forests of eastern Zaire, Africa.

Like the Western species of gorilla, the Eastern Lowland Gorillas walk on all fours, however, they use the knuckles on their hands instead of their palms.

Eastern Lowland Gorillas have black coats which in males, like other gorillas, turns silver at the back as the animal matures. 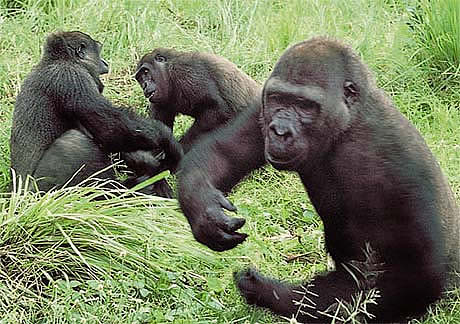 The Eastern Lowland Gorilla has a well developed social structure and they live and travel in family groups. Each family group usually includes a dominant silverback male gorilla, three unrelated adult female gorillas and four or five young gorillas. Subordinate male gorillas may also be found in the groups. Larger groups of 15 – 20 members and even up to 30 members, have also been recorded.

Female Eastern Lowland Gorillas leave their birth groups to join other groups or single male gorillas when they reach sexual maturity at around 7 or 8 years of age. The bonds between these unrelated adult female gorillas are loose and only related female gorillas (e.g. mother/daughter, sisters) will groom one another.

Adult female gorillas give birth to one baby about every 4 years although a surviving infant is produced only every 6 to 8 years due to high infant mortality in the first 3 years of life. A baby gorilla is born weighing 1.8 – 2 kilograms (4 – 4.4 pounds) after a gestation period of 251 – 295 days. Baby gorillas are carried around by their mothers and begin to walk after 30 – 40 weeks. Gorilla infants are breast feed for about 12 months. The baby gorilla can crawl at around 9 weeks old and can walk at about 35 weeks old. Infant gorillas normally stay with their mother for 3 to 4 years and mature at around 11 to 12 years old. Infant gorillas are weaned at 2.5 to 3 years of age.

Eastern Lowland Gorillas mostly eat leaves and other vegetation rather than fruit. Eastern Lowland Gorillas normally feed during the morning and afternoon and rest around midday. They make nests of branches and leaves at night and scientists use nest and scat information collected from these sites to estimate the number of gorillas in a group and to determine their diet.

Eastern Lowland Gorillas can make up to 25 vocalizations such as grunts, laughs, hoots, barks and screams, each with its own specific meaning.

Eastern Lowland Gorillas are the smartest of the primates. They have been taught to use sign language to communicate words and have even put words together to form simple sentences.

The population of Eastern Lowland Gorillas was estimated to number 3,000 – 5,000 individuals in 1980. Since that time civil war in the region has caused increased poaching and pressure on the gorillas and their habitats.