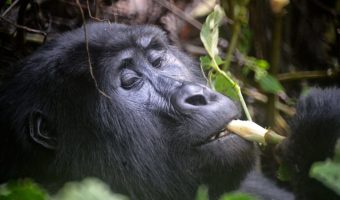 Mountain Gorillas Mountain Gorillas (Gorilla Beringei Beringei) are found in the jungles of Zaire, Rwanda and Uganda and particularly in the Virunga Mountains. Mountain Gorillas have longer and darker hair than other gorillas, enabling them to live at high altitudes and travel into areas where temperatures drop below freezing.

Mountain Gorillas have adapted to a life on the ground more than any other non-human primate and their feet most resemble those of humans. 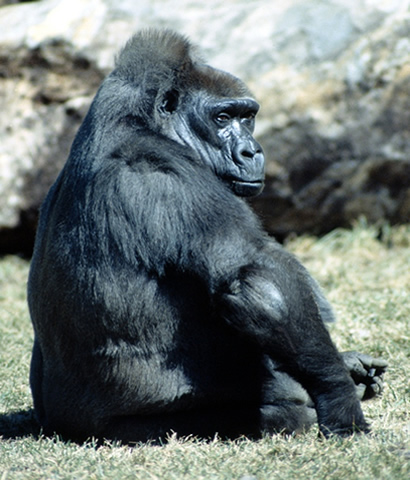 Mountain Gorillas can be identified by nose prints unique to each individual, just like other gorillas. Mountain Gorillas have long, silky black coats, a large body with hairless face, palms, soles and chest. Of the five sub-species of gorilla, the mountain gorilla is one of the rarest. Remarkably strong, the mountain gorilla has a short trunk and a broad chest and shoulders.

Mountain Gorillas are highly social and live in relatively stable, cohesive groups held together by long-term bonds between adult male mountain gorillas and female mountain gorillas. A typical Mountain Gorilla group is led by the biggest and strongest mature male gorilla. The mature male gorilla is called a ‘silverback’ because the hair on a males back turns from black to silvery grey as he matures. A silverbacks group normally includes a sub-adult male gorilla or two and a few female gorillas and their young.

Mountain Gorilla males mature later than females and do not breed until they reach 15 to 20 years of age. About half of all male gorillas leave their natal groups at puberty and travel alone or with other subordinate male gorillas until they establish their own group. Once a male gorilla has established a group, he will most likely stay with that group for life unless he is ousted by another male gorilla. Fights for access to females among dominant silverbacks and lone males are intense and may result in death.

Adult female gorillas give birth to one baby about every 4 years although a surviving infant is produced only every 6 to 8 years due to high infant mortality in the first three years of life. A baby gorilla is born weighing 1.8 – 2 kilograms (4 – 4.4 pounds) after a gestation period of 251 – 295 days. Baby gorillas are carried around by their mothers and begin to walk after 30 – 40 weeks. Gorilla infants are breast feed for about 12 months. Infant gorillas normally stay with their mother for 3 to 4 years and mature at around 11 to 12 years old. Gorilla infants are weaned at 2.5 to 3 years of age.

Mountain gorillas have a slow rate of reproduction. This slow reproduction makes this species even more threatened. During a 40 – 50 year life span, a female Mountain Gorilla might have only 2 – 6 living offspring. Female mountain gorillas give birth for the first time at about the age of 10 years old and will have offspring every four years or more.

Female Mountain gorillas mature at about age 6 and cease to grow taller, although they continue to gain weight slowly until they reach weights of 113 – 136 kilograms (250 – 300 pounds) at ages of 10 to 11 years. Male Mountain gorillas continue to grow both in size and weight past the age of 6 years old. They do not reach maturity until they are about 12 years old. Between the ages of about 6 and 10 years, males retain the uniformly black hair color of their youth and are called ‘Blackbacks’.

The potential for population growth for undisturbed mountain gorillas is comparable to that for human beings. The gestation period is about 9 months. Gorilla mothers with an infant may not have another for up to 4 years. There is also no apparent breeding season, since births of baby gorillas occur throughout the year. However, due to mishaps and disease, many baby gorillas die in the first year of life and nearly half of all gorillas die before reaching adulthood.

The Mountain Gorilla is a highly intelligent and gentle creature. Despite a ferocious reputation, the Mountain Gorilla rarely makes use of his incredible strength. When it comes to defending the family or breeding rights, however, it does display dominance.

Mountain gorillas wander around a home range of up to 15 square miles (39 square kilometres). Mountain Gorilla spend much of their time eating. Their food includes a variety of plants, along with a few insects and worms. At night, Mountain Gorillas make a nest to sleep in. Many lightweight gorillas nest in trees, making beds of bent branches. The heavier individuals may nest in grasses on the ground. Mountain Gorilla infants snuggle with their mothers for the night.

For a long time the image most people had of a gorilla encounter included chest pounding, roaring, charging and big, bared teeth. However, researchers studying gorillas reveal a very different picture of mountain gorillas. Mountain Gorillas are peaceful, gentle, social and mainly vegetarian creatures. The occasional ferocious-looking, impressive displays are generally from a male gorilla protecting his family group from a threat. Gorillas, especially males, have a wide range of vocal and physical communications. Silverbacks can roar, scream and bark to deter predators or competitors. Mountain Gorillas stand on their legs and beat their large chests, which contain air sacks, to produce an intimidating thudding sound. Mountain Gorillas may even charge at people or gorillas they see as threatening, striking the ground with their fists in a display of aggression.

Life for Mountain gorillas is not all that peaceful. Mountain Gorillas are endangered, threatened by civil war in a small area of Africa where they live. Hunters kill them for food or trophies. Mountain Gorillas forests are chopped down for farmland, fuel and housing. However, many dedicated scientists, park rangers and other concerned people are working hard to protect mountain gorillas, their forests and their way of life in the mountains.

Today, about 320 mountain gorillas inhabit the Virungas, however, their long term survival continues to be threatened by natural changes and disasters, hunters and poachers and the chronic political instability that swirls around the edge of their forest home.

Mountain Gorillas can make up to 25 vocalizations such as grunts, laughs, hoots, barks and screams, each with its own specific meaning. MountainGorilla infants tumble, climb and run playing follow the leader. Another group plays a rowdy game of king of the mountain. Several adults watch the action, relaxing nearby. The young mountain gorillas play under the watchful eyes of their mothers.