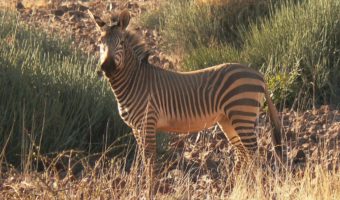 The Mountain Zebra (Equus zebra) and (Equus hartmannae) is a species of zebra, native to South-western Angola, Namibia and South West Africa. Mountain zebras live in dry, stony, mountainous and hilly habitats. Mountain zebras prefer slopes and plateaus and can be found as high as 2,000 metres above sea level, although they do migrate lower in the winter season.

The Cape Mountain Zebra can be found in the southern Cape.

The Cape Mountain Zebra and the Hartmann’s Mountain Zebra are allopatric, meaning that they occur in separate, non overlapping geographic areas. They are therefore unable to crossbreed. 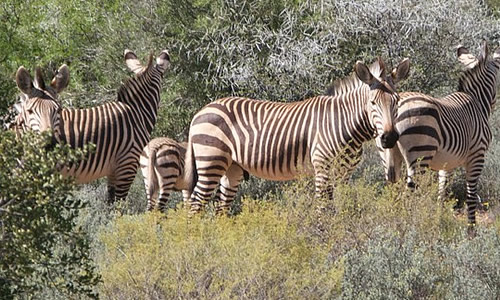 The most distinct feature of both mountain zebra species is a square flap of skin or dewlap on the throat which is best developed on the males. Mountain zebras have black and white stripes all over their bodies except their stomachs, which are white. They have 4 one-toed hoofs and slender, pointed ears that reach up to 8 inches in length.

Mountain zebras have manes of short hair that stand upright from their necks. The stripes on their bodies continue up to their manes. Mountain zebras also have a tuft of hair at the end of their tails.

The Mountain zebra body length measures around 7.3 feet and they stand between 4 feet and 4.5 feet in height. They have an average tail length of 20 inches and their total weight varies between 573 and 815 pounds.

The Cape Mountain Zebra is the smallest zebra and stands around 47 inches high. Its stripes are broad, with a pure white body underneath. The Hartmann’s stripes are also broad, however, they have an off white color beneath them. The Cape Mountain Zebra is stockier than the Hartmann’s Zebra, has larger ears and a larger dewlap. Mountains zebra’s heads are relatively short and striped with a dark muzzle.

The diet of the Mountain Zebra consists of tufted grass, bark, leaves, fruit and roots. Mountain zebras often dig for water in the ground.

Mountain zebra are most active in the early morning and late afternoon. They spend up to half of the daylight hours feeding. Mountain zebra live in herds consisting of one adult male (stallion), one to five adult females (mares) and their young. The stallion is the dominant member of the herd. Sometimes herds come together to form temporary groups of up to 30 individuals.

Zebra have very good eyesight during the day and night. They have binocular vision in the front and can probably see in color. They also have excellent hearing that can detect sounds in the far away distance. Mountain zebra also have a very keen sense of taste and can detect slight changes in the quality of their food.

Gestation period for the Mountain zebra is 180 days. Mountain Zebra foals weigh around 55 pounds at birth. Mares normally give birth to their first foal when they are between 3 and 6 years of age. Zebra give birth to just one offspring at a time. Normally they then give birth to one foal every 1 to 3 years until they are 24 years old. The female Mountain zebra nurses the foal for up to a year.

Like horses, zebras are able to stand, walk and suckle shortly after they are born. Hartmann’s Mountain zebra mothers will force their male young out of the group when a new sibling is born. Male offspring of the Cape Mountain zebra, on the other hand, have to fight their way out of the group to leave and join bachelor groups. The average life span of the Mountain zebra is 20 years in the wild. The oldest recorded Hartmanns zebra was 29 years old.

The Mountain Zebra are listed as ‘Critically Endangered’ on the Red List of Threatened Species, prepared by the World Conservation Union (IUCN), a non-governmental organization that compiles global information on endangered species.