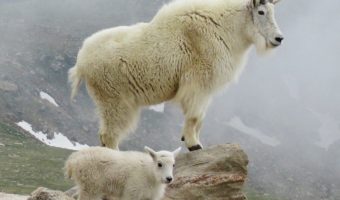 It is a large, even-toed ungulate mammal found only in North America. Despite their name, they are not a ‘true goat’, as they belong to a different genus.

The Mountain Goat resides at high elevations and is a sure-footed climber, often resting on rocky cliffs that predators cannot reach. The Mountain Goat belongs to the subfamily Caprinae, along with 32 other species including true goats, sheep, the chamois and the musk ox.

Mountain Goats stand around 3 feet 3 inches at the shoulder. Both male (billy) and female (nanny) have beards, short tails and long black horns, however, the males horns and beard are longer than the females. Horns can grow to measure 15 – 28 centimetres and have yearly growth rings. Mountain goats typically weigh between 45 and 136 kilograms (100 – 300 pounds) and females are usually 10 – 30% lighter than males.

Mountain Goats have double coats to protect them from the cold. Their undercoats are fine dense wool which are covered by an outer coat of longer, hollow hairs. In warmer summer months, mountain goats rub against rocks and trees to help molting. Their coats help them to withstand temperatures as low as -50 Fahrenheit and winds of up to 100 miles per hour.

Mountain Goats feet are well adapted for climbing steep, rocky slopes with cloven hooves that spread apart as required. They have dew claws on the back of their feet that help them from slipping.

Mountain goats inhabit rocky terrain in alpine and sub alpine regions. Mountain goats frequent extremely steep slopes with pitches above 60 degrees. Mountain goats seasonally migrate from higher rockslide slopes and alpine meadows in the spring and summer to lower elevations in the winter, however, they usually remain above the timberline in winter.

Although they have gained notoriety for their shows of aggression, mountain goats spend most of their time quietly grazing. Their diet includes grasses, herbs, sedges, ferns, moss, lichen, twigs and leaves from the low-growing shrubs and conifers of their high-altitude habitat.

Learn more about Goat Anatomy and the Goat Stomach

Although mountain goats sometimes descend to sea level in coastal areas, they are primarily an alpine and sub alpine species. Throughout the year, the animals usually stay above the snow line, however, they do migrate seasonally to higher or lower altitudes within that range. Summertime migrations to low altitude mineral licks often take them several or more kilometres through forested areas.

In terms of mountain goat reproduction, breeding season occurs late May to early June. Mountain goats reach sexual maturity at about 30 months. The gestation period for the female mountain goat (nanny) is around 6 months. Nannies move to an isolated edge and usually give birth to a single young (kid). Kids weigh around 3 kilograms (7 pounds) at birth. Within hours of being born, the kid attempts to run and climb. Kids are weaned within 1 month and continue to follow their mother around for their first year.

After the breeding season is over, males and females move away from each other, with the adult billies breaking up into small bands of two or three individuals. Nannies form loose-knit nursery groups of up to 50 animals.

Female mountain goats use their fighting abilities to protect themselves and their offspring from predators, such as wolves, wolverines, cougars, lynx and bears. Even at higher higher altitudes, nannies still must defend their young from golden eagles, which can be a threat to very young kids.

The Mountain Goat is classed as ‘Least Concern’ by the IUCN.