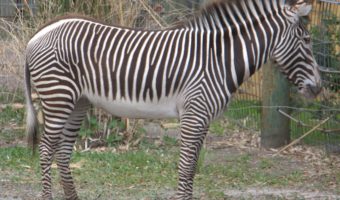 The Grevy’s zebra is considered an endangered species, mainly due to the hunting for its skin which fetches high prices on the world market.

The stripes on the Grevy’s zebra are narrow and close-set, being broader on the neck and extending to the hooves. Grevy’s zebra have one black stripe running down the length of their backs, however, their belly and the area around the base of the tail lack stripes and are just white in color. Because the stripes are closer together and thinner than most of the other zebras, it is easier to make a good escape and to hide from predators. Their ears are very large, rounded and conical. Their heads are large, long, and narrow, with a particularly mule-like appearance.

Grevy’s zebras habitats are grassy plains and savannas where grass is most abundant.

The social structure of the Grevy’s zebra is well-adapted for the dry and arid scrubland and plains that it primarily inhabits, less for the more lush habitats used by the other zebras. The Grevy’s zebra communicates over long distances.

The Grevy’s zebra move around in small groups of adults which only associate for a few months at a time. There is high competition over mating rights within these groups and the stallions will have pushing contests, rearing and biting each other for victory. Females Grevy’s zebra have a hierarchy as well within these groups, however, they engage in mutual grooming to establish relations with each other.

Grevy’s zebra have very good eyesight during the day and night. They have binocular vision in the front and can probably see in color. Grevy’s zebra also have excellent hearing that can detect sounds in the far away distance. They also have a very keen sense of taste and can detect slight changes in the quality of their food.

Grevy’s zebra usually mate in August, September and October and produce foals during the rainy seasons. Grevy’s zebra mate year-round. Gestation of the female zebra lasts 350 – 400 days, with a single foal being born. A newborn zebra will follow anything that moves and therefore, new mothers are highly aggressive towards other mares a few hours after they gave birth. This prevents the foal from acquiring another female as its mother.

To adapt to an arid lifestyle, Grevy’s zebra foals take longer intervals between suckling bouts and do not drink water until they are 3 months old. They also and reach independence from the mare sooner than other equids. Foals nurse heavily for half a year and may travel with their mothers for 3 years.

The Grevy’s zebra foal is able to walk an hour after birth and is able to graze within a few weeks. Groups of females with their young offspring generally form herds of up to 200 animals. In captivity, the Grevy’s zebra life span can be as long as 40 years. In the wild, they usually live about 20 years or shorter.

Grevy’s zebra is listed as endangered on the World Conservation Union’s (IUCN’s) Red List of Threatened Animals partly due to hunting for its skin, which fetches a high price on the world market. The Grevy’s zebra also suffers habitat destruction, human disturbances at water holes and competition with domestic grazing animals. There are estimated to be 1,500 – 2,000 Grevy’s zebra still living in the wild. The Grevy’s zebra is however, common in captivity.