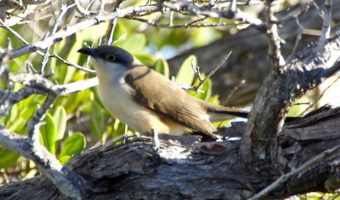 The Dark-billed Cuckoo has a black beak and a distinguishing red orbital ring around its eye. Its eyes are dark and legs are grey. Male and female are similar in plumage, but females average slightly larger.

Despite its name, the Dark-billed Cuckoos are not brood parasites, however, they rear their young in a nest built by themselves. Brood paratism refers to the practice of one species laying its egg in the nest of another species called the host.

The host can often be much smaller than the offspring it will be feeding. In most cases, the parasitic chick will evict the hosts own eggs from the nest so that it has its hosts undivided attention.

Like the Yellow-billed Cuckoo, the young Dark-billed Cuckoo develops incredibly quickly. The entire period from egg laying to fledgling leaving the nest lasts only 17 days. On day six or seven after hatching, the feathers of the young burst out of their sheaths, allowing the nestling to become fully feathered in two hours.

Both parents build the nest, incubate the eggs and brood the nestlings. Dark-billed Cuckoos incubate and brood equally during the day, but the male takes the night shift. The male brings nest material every time he comes to the nest to take his turn. The female usually takes the offering and works it into the nest.

The infant cuckoo resembles the adult, but with a less distinct tail pattern.