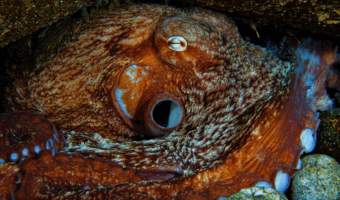 The giant Pacific octopus (Enteroctopus dofleini), also known as the North Pacific giant octopus, is a large marine cephalopod belonging to the genus Enteroctopus. The largest octopus species, it can be found along the coast of California, Oregon, Washington, British Columbia, Alaska, Russia, Japan, and Korean Peninsula, from the intertidal zone down to 2,000 m (6,600 ft).

This octopus eats other marine animals, including crabs, fish, and shrimps, and, despite their large size, are preyed on by marine mammals, such as harbor seals, sea otters, and sperm whales.

While the giant Pacific octopus is commercially fished in some areas, it is not thought to be endangered and is not considered at risk by the IUCN Red List, CITES, or the US Federal List of Endangered Species. 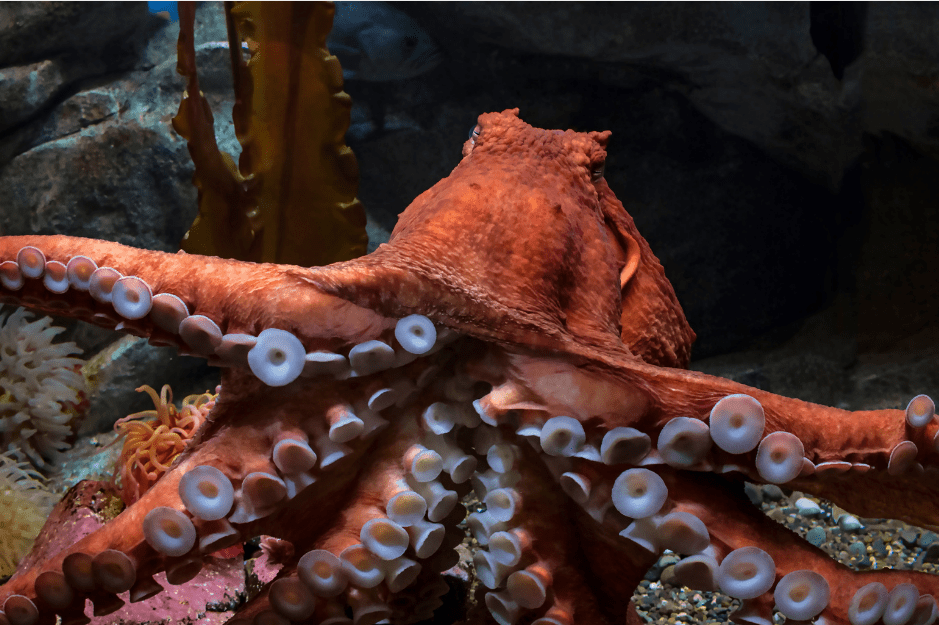 The giant Pacific octopus certainly lives up to its name, as it is the biggest of the octopus species. Adults usually reach an average weight of 60 kg, with an arm span up to 4.3 m (14 ft).

These octopuses are reddish pinkish in color and have eight long arms with up to 280 suckers on them. Inside the dorsal mantle is a beak-like structure hidden for catching food and their body is laden with chromatophore cells that allow them to change color to camouflage themsleves. They have two large eyes one on each side of their head, which provide extremely acute vision.

The giant Pacific octopus has an average lifespan of between 4.5 to 5 years in the wild. This is a similar lifespan to those kept in captivity in aquariums. This is considered to be a fairly long lifespan for an octopus, as many go through a complete life cycle in one year, from egg to end of life.

The giant Pacific octopus eats a variety of other marine animals, such as shrimp, crabs, scallop, abalone, cockles, snails, clams, lobsters, fish, and other octopuses. They catch food with their suckers and then bite the prey to kill it, often killing it with their toxic saliva. They will often stalk their prey and camouflage themselves in order to ambush it.

These octopuses return to their den in order to consume their prey, and they deposit the prey’s remains at the entrance of their den. 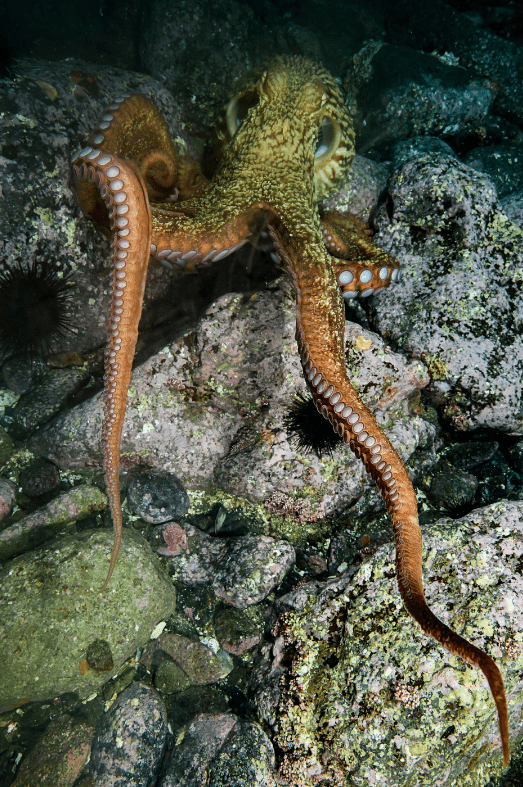 Giant Pacific octopuses are generally solitary animals that prefer to spend their time in dens, in which they will remain for weeks at a time. They will only leave to capture food, mate, or escape predation. A female octopus may live with young ones for some time after laying eggs but apart from this, these octopuses dwell on their own.

These octopuses are considered extremely intelligent, partially do to their larger-than-average brain-to-body weight ratio. Individuals in captivity are known for having having unique temperaments and personalities, ranging from playful to destructive. The giant Pacific octopus is not an aggressive animal, and will rarely challenge humans unless provoked.

The giant Pacific octopus breeds throughout the year, though spawning peaks in winter. Males may breed with several females, but females mate only once in their lifetime. Males use a hectocotylized arm, a specialized tentacle used for the transfer of sperm, to insert the two spermatophores (each 1 m in length) into an oviduct located in the mantle of the female.

After copulation, the female octopus lays 20,000 to 100,000 rice-shaped eggs in grape-like clusters of 200 to 300 eggs each, over several days. These clusters hang from the ceiling of the den like a fan. The female stays with these eggs and protects them from predators.

Depending on the temperature, the eggs will hatch anywhere between 150 days to almost 1 year. This is due to the cold temperature delaying the development of the octopus embryos.

Because the female octopuses remain with their eggs as they brood, guarding them and never leaving the nest, not even to feed, they die shortly after the birth of the babies. Males also die within three months of breeding.

After hatching, the larvae are about the size of a grain of rice and very few survive. With limited swimming ability, they move to the surface to begin a planktonic existence that lasts 1 to 3 months. At the end of the planktonic stage, juveniles descend to the bottom levels of the sea where they undergo rapid growth: starting from 0.03 g and growing to 20 to 40 kg (44 to 88 lb) at adulthood, which is an increase of around 0.9% per dayGiant Pacific octopuses continue to grow until they reproduce.

The giant Pacific octopus is, as its name suggests, found throughout the Pacific Ocean, especially the coastal North Pacific, along California, Oregon, Washington, British Columbia, Alaska, Russia and even into Asia, along Japan and the Korean Peninsula.

They are generally found in tidal pools and up to depths of 110 m, but can also be found deep in the cooler areas of the ocean up to 1,500 m. They are best-adapted to living in cold, oxygen-rich water, between 7 and 9.5 degrees Celsius.

These octopuses are benthic and live in dens or lairs, under boulders, and in rock crevices and prefer a soft substrate of mud, sand or gravel. They require a habitat where they can hide away from predators. 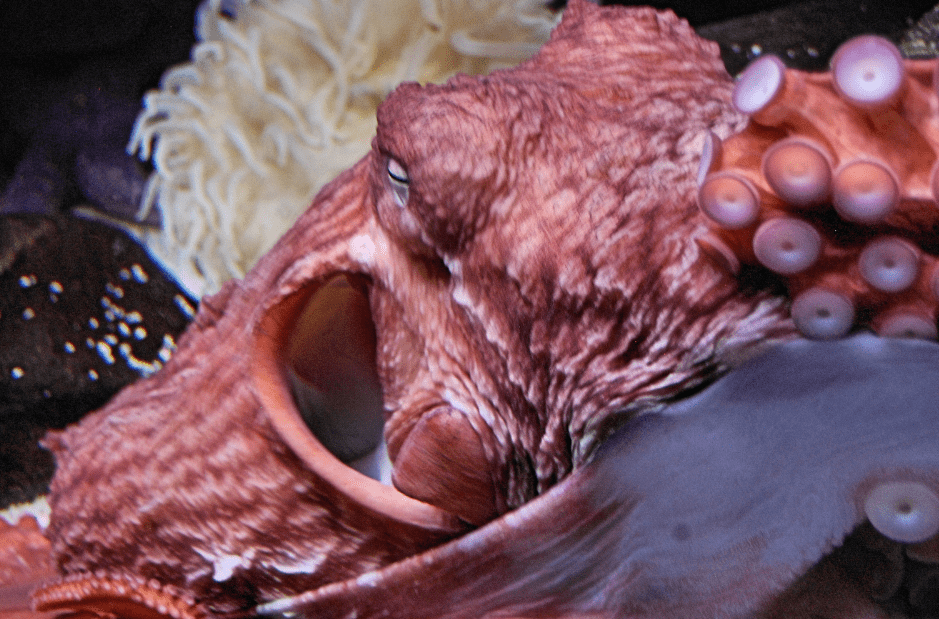 The giant Pacific octopus are not currently considered endangered, nor are they on the IUCN Red List. It is thought that the biggest threat to these animals in the future will be climate change.

These animals are also haunted by humans for their meat, which could cause a decline in future years. The octopus (along with cuttlefish and squid) is a significant source of protein for human consumption. About 3.3 million tons are commercially fished, worth $6 billion annually.

The giant Pacific octopus is preyed on by marine mammals, such as harbor seals, sea otters, and sperm whales. Despite this, adult giant Pacific octopuses are actually quite unlikely to be preyed on, although eggs and young are often eaten, especially when the mother is not around to protect them.

Giant Pacific octopuses are known for their ability to release an ink cloud to protect themselves from predators, although they rarely do so. Instead, they tend to fight off predators with their arms. As giant Pacific octopuses escape, they then expel a cloud of ink as a screen, allowing them to seek safe refuge.