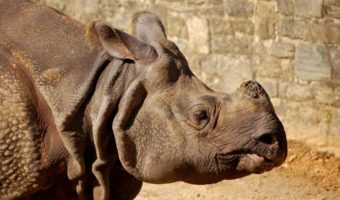 Indian Rhinoceros The Indian Rhinoceros (Rhinoceros unicornis), is also known as the ‘Greater One-horned Rhinoceros’. The Indian rhino once inhabited areas from Pakistan to Burma and may have even roamed in China. However, because of human influence, their range has shrunk and now they only exist in small populations in northeastern India and Nepal.

The Indian rhino is confined to the tall grasslands and forests in the foothills of the Himalayas. The Indian Rhino’s habitat is tropical and subtropical grasslands, savannas, shrub lands, swamps and forests – similar to that of the White rhino.

The Indian Rhinoceros is the largest of the three Asian rhinos. The Indian Rhinoceros has a single black horn which is present in both male and female species and a grey hide with pinkish skin folds, which give it an armour-plated appearance. Male Indian rhinos show enormous development of the neck folds. 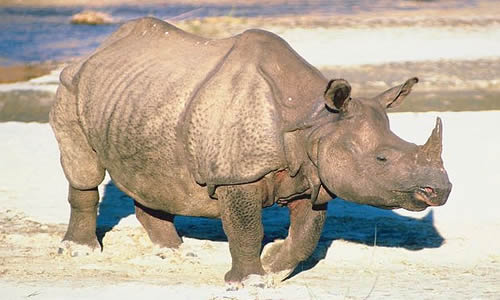 The Indian rhinos upper legs and shoulders are covered in wart-like bumps. The mouth of the Indian rhino looks like a cross between broad-lipped and hook-lipped. Although it is fairly broad, it has a small prehensile lip. The Indian Rhino has only one horn which is made of pure keratin and starts to appear after about one year after birth. The Indian Rhinos single horn reaches a length of between 20 and 101 centimetres. They are approximately the same size as white rhinos.

The Indian rhino grows to be 6 feet tall and weighs between 4000 and 6000 pounds. The Indian rhinos life span is between 35 – 45 years. These rhinos are great swimmers and on land can run up to 35 miles an hour for a short time. The Indian rhino has excellent hearing and smell, however, it has poor eyesight.

Male Indian rhinos can breed at 9 years of age and female Indian rhinos reach sexual maturity at 5 years and have their first calves when between 6 and 8 years. The female whistles when in season so that males know when she is ready to mate. The gestation period is about 16 months. A single calf is born at intervals of about 3 years. Mother rhinos are attentive and protective, the young stay with their mother for several years. Females and their young travel together, however, males usually travel alone and are territorial.

Anatomy of an Indian Rhinoceros 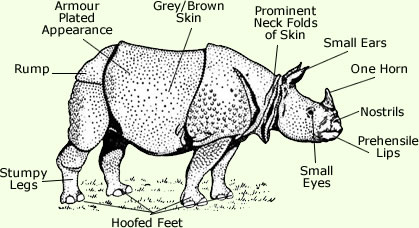 The Indian, or greater one-horned rhino is a conservation success story. Thanks to strict protection measures, its population has increased from 600 in 1975 to about 2,230 today. However, it is still an endangered animal that faces the ever-present danger of poaching for its horn.

The protected areas of India and Nepal, where this rhino survives, are surrounded by dense human populations. It is vital to ensure that communities living around the rhino reserves are sympathetic too and benefit from the rhinos in their midst.

Indian rhinos use communal dung heaps, where they often scrape their feet, leaving a scent as they move around.

Unfortunately, poachers use this information to poach them as they visit these communal dung heaps, making it easier to track down the rhinos. Like all rhinos – the Indian rhinoceros is in great danger of being extinct.

There are success stories: the southern white rhino and the Indian rhino are thriving in well-protected sanctuaries and their numbers are increasing. Black rhinos, too, have increased during the past ten years, however, total numbers are still a fraction of what they were fifty years ago.