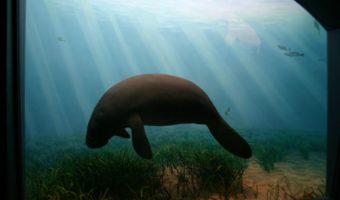 Like other manatees, the West Indian Manatee has adapted fully to an aquatic life style, having no hind limbs. Pelage cover is sparsely distributed across the body, which many play a role in reducing the build-up of algae on the skin. 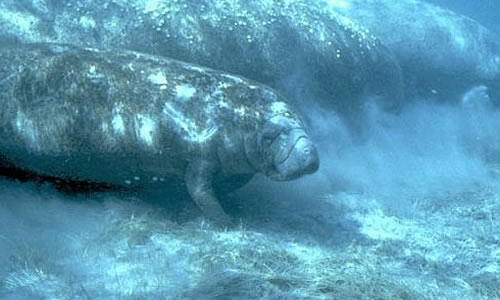 The average West Indian Manatee is approximately 3 metres long, and weighs between 400 and 600 kilograms, with females generally larger than males. The largest individuals can weigh up to 1,500 kilograms.

As its name implies, the West Indian Manatee lives in the West Indies, generally in shallow coastal areas. However, it is known to withstand large changes in water salinity and so have also been found in shallow rivers and estuaries. It is limited to the tropics and sub-tropics due to an extremely low metabolic rate and lack of a thick layer of insulating body fat. During summer, West Indian Manatees have even been found as far north as Rhode Island.

The West Indian Manatee is surprisingly agile in water and individuals have been seen doing rolls, somersaults and even swimming upside-down. Manatees are not territorial and do not have complex predator avoidance behaviour, as they have evolved in areas without natural predators.

The West Indian Manatee is an opportunistic feeder, with large adults feasting on nearly 100 kilograms of sea grasses and plant leaves daily. Because manatees feed on abrasive plants, their molars are often worn down and are continually replaced throughout life. They are also known to eat invertebrates and fish.

Although female West Indian Manatees are mostly solitary creatures, they form mating herds while in estrus (ready to reproduce). Most females breed successfully between ages of 7 and 9 years old, however, females are capable of reproduction as early as 4 years of age.

Gestation period lasts from 12 to 14 months. Normally, one manatee calf is born, although on rare occasions two have been recorded. Young manatees are born with molars and premolars, allowing them to consume sea grass within the first three weeks of birth.

The West Indian Manatee has been hunted for hundreds of years for meat and hide, and continues to be hunted to this day in Central and South America. Illegal poaching, as well as collisions with speeding motorboats, are a constant source of manatee fatalities.

Due to their low reproductive rates, a decline in manatee population may be hard to overcome. West Indian Manatees enjoy protection from the U.S. Endangered Species Act of 1973, and the U.S. Marine Mammal Act of 1972.