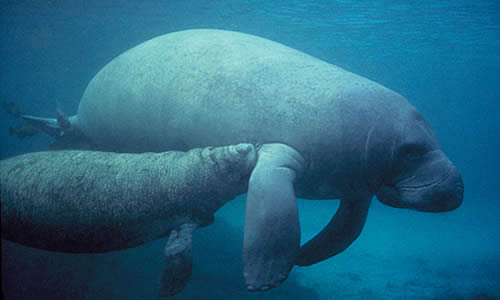 The manatee has a streamlined body – full around the middle and narrowing to a paddle-shaped tail.

Manatees are a greyish-brown colour, however, Amazonian manatees usually have white or pink patches on the belly and chest. Organisms such as algae, which may grow on the skin of these slow-moving individuals, help determine their colouration.

Manatees have two small pectoral flippers on their upper body which are used for steering. These flexible flippers may also be used for bringing food to the manatees mouth and for guiding movement along a waterways bottom.

Manatee flippers have five digits that are covered by a thick layer of skin. This bone structure is similar to that of toothed whales, seals, and sea lions. Manatees have no externally visible neck. Manatees do not have external ear flaps and the opening to the ear canal is very small. Manatees have two nostrils that lie on top of the head at the end of the snout.

Manatees have a large flexible upper lip. Their lips help guide vegetation into their mouth. Vibrissae (whiskers) are found on the surface of this lip. Each vibrissa is separately attached to the nerve endings and has its own blood supply in the follicle. Manatees have small eyes (about 0.8 inches or 2 centimetres in diameter) which are located on the sides of the head.

A manatee swims by moving its large paddle like tail in an up-and-down motion. A manatee has sparse hair scattered over its torso.