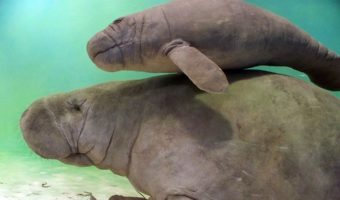 The African Manatee (Trichechus senegalensis) is a species of manatee and is the least studied of the four species of sirenians. Photos of African Manatees are very rare. Although very little is known about this species, scientists think they are similar to the West Indian Manatees. 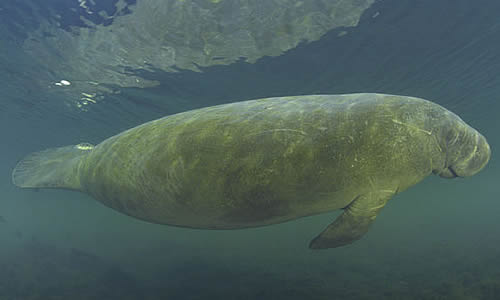 African Manatees are found in coastal marine and estuarine habitats and in fresh water river systems along the west coast of Africa from the Senegal River south to the Kwanza River in Angola, including areas in Gambia, Liberia, Guinea-Bissau, Guinea, Sierra Leone, Côte d’Ivoire, Ghana, Mali, Nigeria, Cameroon, Gabon, Republic of the Congo, and Democratic Republic of the Congo.

Although crocodiles and sharks occasionally kill manatees in Africa, the African Manatees only significant threats are from humankind, such as poaching, habitat loss and other environmental impacts.

The West African manatee feeds primarily on vegetation.  It is dependent on emergent or overhanging, rather than submerged, vegetation. Populations in some rivers depend heavily on overhanging bank growth and those in estuarine areas feed exclusively on mangroves.

In Sierra Leone,  manatees supposedly remove fish from nets and consume rice in such quantities that they are considered to be pests. In Senegal and Gambia, shell remains of mollusks have also been found in their stomachs.

The West African Manatee is dependent on emergent or overhanging, rather than submerged, vegetation. Populations in some rivers depend heavily on overhanging bank growth and those in estuarine areas feed exclusively on mangroves.

The West African manatee feeds principally at night and travels in the late afternoon and at night. It usually rests during the day in water that is 1 – 2 metres (3 – 6 feet) deep, sometimes in the middle of a watercourse or hidden in mangrove roots or under natant vegetation. The West African manatee makes little disturbance in the water while swimming.

Seasonal movements of the West African manatee,  in response to changes in water level that affect availability of food and/or water salinity, have been reported for several areas.

In Sierra Leone, it was reported that this manatee is present in the main river channels year-round, but that a migration of some sort may take place, with an influx of new animals arriving in most upriver areas as flooding begins in June and July. An individual manatee may travel 30 – 40 kilometres per day (19 – 25 miles per day) through lagoons and rivers.

The breeding period of the West African Manatee is uncertain and may last throughout the year, as is the case with the Amazonian and American manatees.  One manatee calf is produced each breeding period. Birth occurs in shallow lagoons.

The West African manatee is mostly solitary, with mothers and calves being the principal social unit. However, they will often rest together in loose, small groups of two to six individuals.

In the past, the West African manatees population decline has been attributed largely to hunting and incidental capture in fishing nets. Recently, continuing uncontrolled and likely unsustainable hunting is considered the major threat. Despite legal protection, the manatee is still hunted throughout its range for meat, leather and oil, by harpoon, trap, net and snagline.

The West African manatee is known to die accidentally in shark nets, trawls, set nets and weirs. It is sometimes also killed in turbines or control gates of dams. The coastal wetlands that are a major habitat for this manatee have already been heavily damaged and are further severely threatened. The West African Manatee is considered endangered by the IUCN.