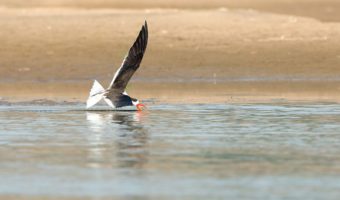 The Indian Skimmer (Rynchops albicollis) was once known as the Indian Scissors-bill because of its strange bill.

The Indian Skimmer is found mainly in parts of India and Pakistan and there are estimated to be about 6,000 – 10,000 individuals, however, these numbers may well have fallen below this level given the evidence of declines throughout its range.

Indian skimmers are more widespread in winter and are found in coastal estuaries of western and eastern India. Some parts of Africa also provide resident habitats to Skimmers.

The indian skimmer is one of 3 species belonging to the skimmer family: Rynchopidae. The Skimmer gets its name from the specialized predatory hunting behaviour involving its unique bill.

Use the information below to find out more about the Indian Skimmer’s characteristics, habitat, diet, behaviour and reproduction.

Indian skimmers are easily recognised birds with their black and white plumage, black head cap, white face and collar and distinctive long, thick, bright orange bill with a yellow tip. Their bills are quite unique in that the upper mandible is somewhat shorter than the lower mandible. The lower mandible is flexible and resembles a knife and is skimmed through the surface of the water, picking up aquatic prey while it flies. The upper mandible is capable of considerable flexibility.

The indian skimmer’s wings are long, pointed and black in color with a white trailing edge. Their short, forked tails are white with black central feathers and their legs and feet are red.

A quick look at any flying or stationary Skimmer will show the horizontally extended eyes, almost like slits. Only the Skimmer has this type of physical protection against likely water spray when skimming the surface of the ocean.

The Indian Skimmer can be found on coastal wetlands and lagoons, large, lowland rivers, lakes, marshes, swamps and estuaries and freshwater sources particularly during the breeding season.

Skimmers tend to forage in small flocks. These bright billed birds hunt the ocean and up and down large rivers and lakes both during the day and during moonlit nights. Skimmers forage for food by flying low over water with their bills open and their lower mandible ploughing through the waters surface. They show remarkable aerobatic skills as the bill is maintained on a steady path through the surface of the water.

When the bird encounters a fish, the lower mandible is raised up and snapped shut with an up and down movement of the head. Excess water is drained from the beak as the bird lifts itself back into the air. The mandible, therefore, efficiently separates fish and sea protein from the water. The fish is then either eaten in flight or on landing.

Indian skimmers feed up on surface-dwelling fish, however, they will also eat small crustaceans and insect larvae. Marine life and sea protein make up a large part of the Skimmer’s diet.

The Indian Skimmer is generally a silent bird but can produce a high nasal ‘kyap-kyap’ or ‘kap’ or ‘kip’ call when disturbed, alarmed or in flight.

Indian skimmers are sociable birds who nest in colonies and roost in flocks on sand banks.

Breeding season occurs February to May when colonies of over 40 mating pairs can be seen nesting on sandy islands or open sand banks often accompanied by other birds such as Terns. Nests are simple scrapes in the ground that allow the birds to view any approaching predators.

The female lays between 3 – 5 buff white eggs that have brown blotches and streaks on them. The eggs are incubated in the nest during the cooler parts of the day and taken away from the nest to cooler parts when it is the hottest part of the day. The incubating adults are said to soak their bellies with water to help cool the eggs. Eggs are incubated for 21 – 30 days.

Young indian skimmers are grey/brown in color with pale fringes on the shoulder feathers, the back and wing coverts. There is more white coloration on their heads than in the adults and their bills are orange with a dark tip. Their bills are equal length when born, but as they approach fledgling age at 35 – 42 days, the lower mandible becomes more elongated.

Skimmers reach sexual maturity at 2 years old. The Indian skimmer breeds once a year. The life span of skimmers is unknown but they may well live between 15 – 20 years.

The Indian Skimmer is classed as ‘Vulnerable’ by the IUCN. It is threatened by loss of habitat and degradation, pollution and disturbance of lowland rivers and lakes. Most colonies are unprotected, however, some lie within nature reserves such as the National Chambal (Gharial) Wildlife Sanctuary in India. Active management has reduced key threats at some wetland sites. African Skimmers are also almost as threatened as the Indian Skimmer.

Did you know this about Indian Skimmers?

Inexperienced bird watchers might have to look twice to distinguish a Skimmer from a Tern.