The Manx Shearwater (Puffinus puffinus) is an amazing bird that is a member of the shearwater family, a family of birds that consists of over twenty different species.

Around the British Isles, it is the most commonly sighted of the shearwaters,

The prefix Manx, meaning from the Isle of Man, originated owing to the once large colony of Manx Shearwaters found on the Calf of Man (a small island just south of the Isle of Man).

The species had declined there owing to the accidental introduction of rats from a shipwreck in the late eighteenth century. The rats have, however, recently been removed from the Calf of Man allowing Shearwater numbers to increase.

The Manx Shearwaters Latin name of ‘Puffinus puffinus’ is a rather misleading name as they are no relation to Puffins, who are members of the Auk family. The only resemblance being that they are both burrow-nesting seabirds.

The Manx Shearwater is a coastal sea bird and is most often seen skimming along the waves in the wake of a boat or soaring below cliffs in the evening before coming in to land in the darkness to take food to their solitary young. The Manx Shearwaters can be spotted around much of Britains coastline but particularly in West Wales/Northern Ireland and the Western Isles of Scotland where they have colonies. If you want to see the colonies then a trip to either Skokholm in Wales or Copeland of the East Coast of Northern Ireland, not far from Belfast, are the best places to go. The Manx Shearwater is a true master of the sea. It is often seen gliding fast and purposefully just above seawater, with wing tips seeming to cut or ‘shear’ the surf. 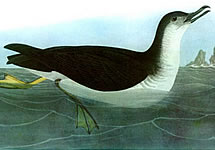 The Manx Shearwater measures around 30 – 35 centimetres in length and has a wingspan of 71 – 83 centimetres. The plumage of the manx shearwater is sharply divided into dark, glossy brown upperparts and greyish-white underparts. Their beak is quite long and slender, hooked and grey in colour.

Manx Shearwaters have tube-shaped nostrils that excrete salt taken in with seawater. Both male and female are similar in appearance. Their wings are very slender and positioned almost at right-angles to the body when in full flight. The position of their wings allow them to soar with maximum efficiency, meaning they are able to travel vast distances between feeding grounds and stay at sea for many months. Shearwaters can appear awkward and cumbersome when walking on land.

Manx shearwaters nest in burrows and therefore prefer cliff slopes that have large stretches of turf.

The Manx Shearwater feeds on small fish, particularly herring, sprat and sardines. They also eat sand eels, squid, crustaceans, cephalopods and surface offal. Shearwaters forage individually or in small flocks and they make use of feeding marine mammals and schools of predatory fish, which push prey species up to the surface. Shearwaters scavenge from fishing boats occasionally.

The Manx shearwater is a gregarious species, which can been seen in large numbers from boats or headlands, especially on passage in autumn. It is silent at sea, however, at night the breeding colonies are alive with raucous cackling calls.

All the Shearwaters are long travelers. Manx Shearwaters migrate over 10,000 kilometres to South America in the winter. This long journey means this bird has covered a minimum of 1,000,000 kilometres on migration alone (not counting day-to-day fishing trips). One particular shearwater was ‘ringed’ in 1957 and breeding on Bardsey Island off Wales. It was calculated by ornithologist Chris Mead to have flown over 8 million kilometres (5 million miles) during its life (this bird was still alive in 2008). This shearwater has now exceeded the age record for any known living European bird surpassing the ‘Copeland Island bird’ by at least a year making it at least 56 years old.

Manx Shearwaters breed in the North Atlantic, with major colonies on islands and coastal cliffs around Britain and Ireland. They nest in burrows. The burrow is usually found in soft grassy earth on the offshore islands around the British coastline. The female shearwater lays one white egg which is only visited at night to avoid predators such as large gulls, adults are off at sea for most of the day. This technique works as shearwaters are extraordinarily long-lived. In the process of rearing their single chick, parent birds may travel as far as six hundred miles offshore to seek food. Both parents feed it with regurgitated food. Shearwaters are monogamous which means they pair for life.

Breeding colonies are often huge and are especially active when parent birds return to their nests for the night. It is at this time that the adults utter their characteristic, eerie cooing calls. Manx Shearwaters reside in breeding sites along the western coast of the British Isles. During the deep winter months many of these birds travel across the Atlantic Ocean to spend time on the coast of South America, returning to British waters in February.

Manx shearwaters are not an endangered species and are not listed by the IUCN.