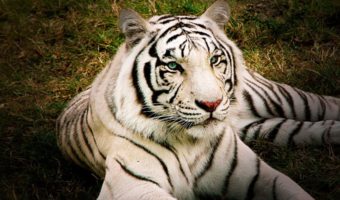 There is an interesting story to the discovery of the first White Bengal tiger. In India one of the royalties which was led by by Maharaja Shri Martand Singh of Rewa had killed a white tigeress. Later, four cubs of this dead tigeress were found. All of them were shot except for the white cub.

Water was used to lure the thirsty cub into a cage and once captured he was housed in the unused palace at Govindgarh in the erstwhile harem courtyard. The Maharaja named him ‘Mohan’, which roughly translates as ‘Enchanter’.

All the white tigers in the world today are the descendants of this cub.

Contrary to popular belief, White Bengal tigers are not a separate species in their own right, but are a mutant form of the orange Bengal tigers.

In the public eye, white, or more correctly, chinchilla tigers are perhaps the color which is to be most admired. The correct term for these tigers is chinchilla albinistic: blue eyed, lacking in phaeomelanin, pale-coated, but having a pattern.

White Bengal tigers grow faster and heavier than their orange relatives and with their pale ice blue eyes, white fur with chocolate colored stripes, pink noses and pink paw pads they are indeed a beautiful sight.

Unfortunately, White Bengal tigers are subject to extreme inbreeding because of the demand for their rare colorings. Inbreeding is not a natural occurrence and can to lead certain deformities in the newborns.

A White Bengal tiger cub can only be born when both parents carry the unusual gene for white coloring. The double recessive allele (a viable DNA coding that occupies a given position on a chromosome) in the genetic code only turns up naturally about once in every 10,000 births. For unexplained reasons it seems to occur only in the Bengal subspecies.

There number declined at a fast rate. White Bengal tigers are one of the only two species of cats that like water. At full running speed they reach speed of up to 60 kilometres per hour. They do not possess great stamina. The average White Bengal tiger sleeps between 16 to 18 hours per day.

White Bengal tigers lead solitary lives and the courtship period and association between mother and cub is their only interaction and association. Tigers are entirely different in their hunting habits from lions. Tigers rest during the day in the shade and begin to hunt for food at dusk. White Bengal tigers have keen eye sight and a sharp hearing that helps them stalk their prey.

Tiger killings are split second actions where the prey hardly has any chance of survival. The Tigers formidable and retractile claws play a significant role in capturing and holding on to its prey.

The White Bengal tigers diet in the wild is water buffalo, goat, deer and wild boar. Their diet in captivity is mainly chicken, horsemeat or kangaroo meat five days a week. They also fast on bones twice a week in captivity.

However, two white parents are the only way to ensure white cubs. If a White Bengal tiger mates with a partner that is heterozygous for the gene, only half of the offspring will be white.

Outside of India, highly inbred White Bengal tigers are prone to crossed eyes (strabismus) due to incorrectly routed visual pathways in the brain), star-gazing and postural problems, a weakened immune system and poor tolerance of anaesthesia, possibly due to inability to synthesize the tyrosinase enzyme.

Strabismus is associated with white tigers of Bengal/Amur ancestry. Only one pure Bengal white tiger was reported to be cross eyed, this being Mohini’s daughter Rewati.

White Bengal tigers may also be prone to Chediak-Higashi Syndrome which causes bluish lightening of the fur color and is associated with crossed eyes. Other genetic problems include shortened tendons of the forelegs, clubbed feet, central retinal degeneration, abnormal kidneys, arched or crooked backbone and twisted neck.

Reduced fertility and miscarriages were noted by Sankhala (the director of the New Delhi Zoo in the 1960s) and were attributed to inbreeding depression. Some of the white tigers born to North American lines have bulldog faces with a snub nose, jutting jaw, domed head and wide-set eyes with an indentation between the eyes. However, some of these traits have also been linked to poor diet.

There are only a small quantity of white tigers in existence and present numbers are put in the region of 500. With the inevitable inbreeding problems a debate continually rages over the wisdom of breeding this animal. White tigers, white lions, white peacocks, none are representative of their wild populations.

The Tiger Species Survival Programme has actively discouraged breeding white tigers because of their mixed ancestry. Most of these animals have been hybridised with members of other subspecies usually of an unknown lineage.

Other organisations object to white tigers both because of the lack of genetic diversity and because it serves no practical conservation purpose.

Some opponents state that white tiger breeding only inflates the stud book entries for zoos and provides a popular exhibit which helps increase attendance and revenue.