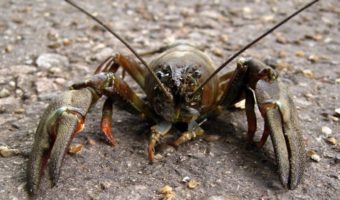 The White-clawed Crayfish (Austropotamobius pallipes) is an endangered European freshwater crayfish and the only species of crayfish native to the British Isles. It is also known as the Atlantic stream crayfish. The White-clawed Crayfish is found from the Balkan Peninsula to Spain and reaches its northerly limit in Great Britain and Ireland, where it also has its greatest population density.

The White-clawed Crayfish is an olive-brown colored crayfish, with pale colored undersides to its claws. 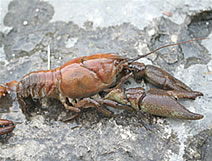 The population of White-clawed Crayfish is rapidly declining and once found across most of England and Wales in Great Britain, it is now more or less restricted to central and northern England and eastern Wales.

One of the major reasons for this decline is the introduction of the invasive North American signal crayfish (Pacifastacus leniusculus). The signal crayfish is a carrier of crayfish plague, an infectious disease to which it has resistance while the native crayfish have none. The British species is also sensitive to many kinds of pollution, such as insecticides.

The White-clawed Crayfish is the only species of crayfish found in Ireland, occurring over limestone areas inhabiting rivers, streams, canals and lakes.

White-clawed Crayfish are absent from the more acidic waters of the west. They occur in streams with a moderate flow alongside other freshwater invertebrates such as caddis fly, mayfly and mollusc species.

Trout and 3 Spined Stickleback also occur in the same habitat. Tree roots, rocks in the banks provide shelter. Juvenile White-clawed Crayfish species shelter in vegetation such as watercress and grass mats growing out of the bank.

The White-clawed Crayfish is classed as ‘Vulverable’ on the IUCN list 10 May 2006.