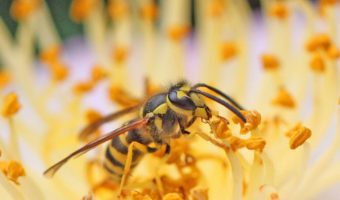 Yellowjacket wasps are black-and-yellow wasps of the genus Vespula or Dolichovespula (though some can be black-and-white, the most notable of these being the bald-faced hornet, Dolichovespula maculata). Yellowjacket wasps can be identified by their distinctive combination of black-and-yellow color, small size (slightly larger than a bee), and entirely black antennae. In some parts of the south eastern U.S., they are called meat bees.

Yellowjacket wasps live in colonies which can consist of thousands of individuals. These beneficial insects would not anger or threaten us except that they have adapted themselves to living very closely with us. Yellowjacket wasps take advantage of us by sometimes nesting in the wall spaces and attics of our homes where they can go unnoticed all season. 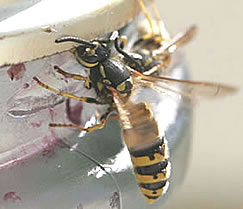 Yellowjacket wasps leave the nest area to fly outdoors in search of food. However, at the end of summer, when food becomes scarce and the temperature outdoors cools, they frequently find their way into the living areas of the home. This is when they can become a nuisance and must be controlled. It is very important not to squash a Yellowjacket near its nest.

A dying Yellowjacket releases an alarm pheromone which smells. This odour alerts the other wasps and within 15 seconds you could be surrounded by wasps coming to the aid of the dying one.

The Yellowjackets reproduction undergoes an annual cycle. Only queens which have mated at the end of summer survive the winter. They hide in protected places such as under logs, in dense bushes and in abandoned rodent nests through the winter. In the Spring, the fertilized queen will establish a colony, build a paper nest containing 30 – 50 brood cells and lay from 10 – 20 eggs there.

The queens feed the young larvae for around 18 – 20 days. The larvae then pupates and then emerges as infertile female workers. By mid-June, the first adult workers emerge and assume the tasks of making the nest larger, foraging for food, caring for the queen and larvae, and defending the colony.

From this time until her death in the autumn, the queen remains inside the nest laying eggs. The colony then expands rapidly reaching a maximum size of 4,000 to 5,000 workers and a nest of 10,000 to 15,000 cells in August and late September.

Yellowjacket wasp nests usually last for only one season, dying off in winter. The nest is started by a single queen, called the foundress, and typically can reach the size of a basketball by the end of the season.

In parts of Australia , New Zealand, the Pacific Islands and southwestern coastal areas of the United States, the winters are mild enough to allow nest over wintering. Nests that survive multiple seasons become massive and often possess multiple egg-laying queens.