You are here: Home / Animals / Blue and Yellow Macaw 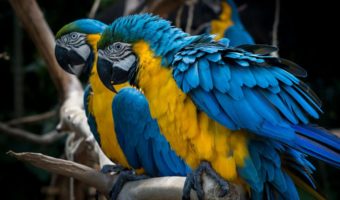 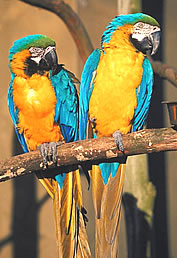 The Blue and Yellow Macaw has blue wings and tail, black chin, golden underparts and a green forehead. Their beaks are black and very strong for crushing nuts. The naked face is white, turning pink in excited birds and lined with small black feathers. There is little variation in plumage across the range. Some birds have a more orangey or ‘butterscotch’ underside color, particularly on the breast.

The Blue and Yellow Macaw measures around 34 – 36 inches in length from the tip of its head to the tip of its tail making them one of the biggest parrots in the world. It has a wing span of 41 to 45 inches and weighs between 900 and 1300 grams.

The Blue and Yellow Macaw reaches breeding age when they are 3 to 4 years old. They are known to pair for life and live in small family groups. Blue and Yellow Macaws nest high above the ground in cavities found in large, dead trees. Only two or three eggs are laid in a nest. It is thought that the female incubates them. However, both male and female aggressively defend the eggs.

When the young hatch, they are blind and featherless. The parents will raise only the strongest chick, leaving the others to starve to death. The young Macaws do not develop their full plumage until they are at least 10 weeks old. After they grow feathers, or fledge, they remain with their parents for several months before becoming independent. The Blue and yellow Macaw can live up to 60 years of age.

In the wild, Blue and Yellow Macaws eat palm fruit and other tree fruits. One of the Macaws favourite foods is the seeds of the Hura crepitans tree. They usually roost at a different place from where they eat. Their feeding ground may be some distance away. Often macaws gather at clay licks to eat mineral and salt bearing clay, which is found on river banks.

Macaws are very gregarious animals. They tend to congregate in flocks of a hundred or more animals. Macaws do not have a leader of the flock. All the birds seem to be equal, and they just move around as a group. However, the paired birds usually fly very close together with their wings almost touching.

Blue and Yellow Macaw in Captivity

The macaw is a sociable bird when it is in captivity and can be hand raised. It can learn to imitate sounds and words. It cannot really talk, only mimic. Macaws can be trained to sit on a perch, but if it is caged, its beautiful tail feathers will be ruined because they are so long.

Macaws require much more effort – and more knowledge – from owners than more traditional pets such as dogs or cats. Macaws are intelligent and loving, so for someone who can provide for their needs, they make good companion animals.

As pets, macaws require a varied diet, a seed only diet will lead to health problems such as vitamin deficiency. An example of a good diet would be a quality pellet mix, in conjunction with a mix featuring seed, nuts and dried fruits, with fresh vegetables and fruits fed regularly; furthermore, it is quite common (and appreciated by the parrot) to partake with their human owners of safe foods like pasta, bread, etc. It is important to avoid foods with high fat content (generally) while striving to provide a wide variety of foods.