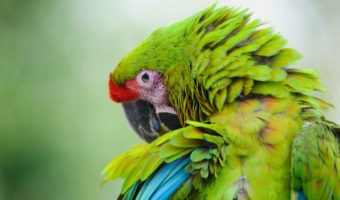 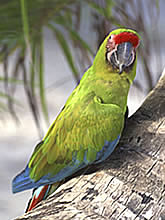 Great Green Macaws are green, with a reddish forehead and pale blue lower back rump and upper tail cover feathers. Their tails are brownish red tipped with very pale blue. The Great Green Macaw can grow to measure 85 – 90 centimetres in length. It has a red frontal band above a huge black beak. It has a bare facial area with black lines. The facial lines are more reddish in older (especially female) birds. The Great Green Macaw makes loud squawks and growls and a creaking ‘aaa’ call.

The beak of this macaw is larger than that of the Scarlet macaw. It is adapted to cracking open the very tough nuts of the swamp almond tree (Dipteryx panamensis). The life cycle of the Great Green Macaw is connected very closely to Dipteryx trees as it nests in hollow cavities of this tree and depends on its fruits as a major food.

The Great Green Macaw is sometimes bred in captivity, having a less nervous personality than most other macaws, but it is still very rarely seen as a pet.

The Great Green Macaw has been uplisted to Endangered because extensive habitat destruction and capture for the cage-bird trade are inferred to have caused very rapid and continuing population declines. These threats have had such a significant impact that it is very rare in four out of six range states and the total population is now suspected to be small.

The Great Green Macaw has been one of the key elements in the proposal for the formation of a new National Park in Costa Rica, Maquenque National Park. Already significant parts of the birds existing habitat is covered by Nature reserves and other conservation projects.

The Great Green Macaws current population is estimated at 1,000 – 2,499 individuals.