You are here: Home / Animals / Aardvark 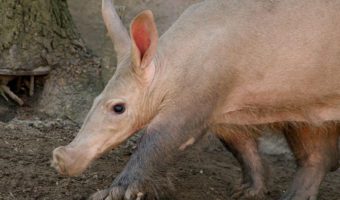 The Aardvark (Orycteropus afer) (‘Digging foot’), sometimes called ‘antbear’ is a medium-sized mammal native to Africa. The name comes from the Afrikaans/Dutch for ‘earth pig’, because early settlers from Europe thought it resembled a pig. However, the aardvark is not related to the pig, it is placed in its own order.

One of the most distinctive characteristics of the aardvark is their teeth. Instead of having a pulp cavity in their tooth, they have a number of thin tubes of dentine (a calcified tissue of the body), each containing pulp held together by cementum (a specialized calcified substance covering the root of a tooth). The teeth have no enamel coating and are worn away and regrow continuously. The Aardvark is born with conventional incisors and canines at the front of the jaw, which fall out and are not replaced. Adult Aardvarks only have cheek teeth at the back of the jaw.

The Aardvark is vaguely pig-like. Its body is stout with an arched back and is sparsely covered with coarse hairs. The limbs are of moderate length. The front feet have lost the pollex (or ‘thumb’), resulting in four toes, however, the rear feet have all five toes.

Aardvarks have shovel-shaped claws for digging. Their ears are disproportionately long and the tail is very thick at the base and gradually tapers. Their greatly elongated head is set on a short, thick neck and the end of the snout bears a disc, which houses the nostrils. Their mouth is small and tubular, typical of species that feed on termites. The aardvark has a long, thin, protruding tongue (as long as 30 centimetres) and elaborate structures supporting a keen sense of smell. Of all living mammals, the aardvark has the largest number of turbinate bones in its nasal cavity.

The aardvarks cone-shaped tail is short and tapered, smaller at the end. The long tongue is sticky to help catch insects. Adult aardvarks are 67 to 79 inches (170 to 200 centimetres) long and weigh anywhere from 88 to 143 pounds (40 to 65 kilograms). The aardvark is pale yellowish grey in color and often stained reddish-brown by soil. The aardvarks coat is thin and the animals primary protection is its tough skin. The aardvark has been known to sleep in recently excavated ant nests, which also serve as protection. The number of aardvarks has nearly doubled since 2002.

The Aardvark is a nocturnal mammal and is a solitary creature that feeds almost exclusively on ants and termites. The only fruit eaten by aardvarks is the aardvark cucumber. An aardvark emerges from its burrow in the late afternoon or shortly after sunset and forages over a considerable home range covering 10 to 30 kilometres, swinging its long nose from side to side to pick up the scent of food. When a concentration of ants or termites is detected, the Aardvark digs into it with its powerful front legs, keeping its long ears upright to listen for predators such as lions, leopards, hyenas and pythons.

The aardvark takes up an astonishing number of insects with its long, sticky tongue, as many as 50,000 in one night. It is an exceptionally fast digger, but otherwise moves fairly slowly. The aardvarks claws enable it to dig through the extremely hard crust of a termite/ant mound quickly, avoiding the dust by sealing the nostrils. When successful, the aardvarks long (as long as 30 centimetres) tongue licks up the insects. The termitess stinging attacks are ineffective because of the aardvarks tough skin.

Apart from digging out ants and termites, the aardvark also excavates burrows in which to live. Temporary sites are scattered around their home range as refuges and a main burrow is used for breeding. Main burrows can be deep and extensive, have several entrances and can be as long as 13 metres.

The Aardvark changes the layout of its home burrow regularly and from time to time moves on and makes a new one. The old burrows are then inhabited by smaller animals such as the African Wild Dog. Only mothers and cubs share burrows. If attacked in the tunnel, the aardvark will seal the tunnel off behind itself or turn around and attack with its claws.

Aardvarks live in Sub saharan Africa, where there is suitable habitat for them to live, such as savannas, grasslands, woodlands and bush land and available food (ants and termites). Aardvarks are sometimes found in rainforests and are absent from desert regions. The deciding factor for where aardvarks live is availability of food.

Aardvarks also require sandy soil, as opposed to rocks, so that they can dig for termites and ants. Aardvarks live in underground burrows that are 6.5 to 9.8 feet (2 to 3 metres) long, at 45 degree angles. At the end of the tunnel is a rounded ‘room’ where the aardvark curls up to sleep. Female aardvarks give birth in this chamber. Although burrows usually have just one entrance, some have numerous entrances as well as several tunnels extending from the main passage.

Aardvarks can consume about 50,000 insects in one night. Aardvarks began eating termites and ants thirty-five million years ago and they are still their preferred meal. A hill of termites or ants is not enough to satisfy an aardvark, however, so it searches for entire termite and ant colonies. These colonies march in columns 33 to 130 feet (10 to 40 metres) long, which makes it easy for the aardvark to suck the termites/ants through its nostrils. When attacking a termite/ant mound, the aardvark starts digging at the base with his front claws. Once the termites/ants begin escaping, it extends its tongue and traps them with its sticky saliva. Aardvarks also eat locusts and a type of grasshopper.

The mating season of the aardvark varies. In some areas, mating occurs between April and May, with offspring born in October or November. In other regions, offspring are born in May or June. Females carry their offspring for 7 months before giving birth to one cub with each pregnancy. The cub weighs approximately 4 pounds (2 kilograms).

Newborn aardvarks are hairless with pink, tender skin. They remain in the burrow with their mothers for two weeks. After two weeks they follow their mothers in the nightly search for food. The aardvark cub does not eat solid food until around 3 months, preferring its mothers milk until that time. The cub begins eating termites at 14 weeks and is weaned by 16 weeks. At 6 months of age it is able to dig its own burrows, but it will often remain with the mother until the next mating season. The cub reaches sexually maturity the season after that.

Male aardvarks leave their mothers completely during the next mating season, but females stay with mothers until the birth of the next cub. Male aardvarks roam while females remain in a consistent home range. Because of this, experts believe aardvarks to be polygamous (puh-LIH-guh-mus), having more than one mating partner.

Aardvarks can live to be over 24 years old in captivity. In the wild, they live between 10 – 23 years.

The aardvarks main predators are lions, leopards, hunting dogs and pythons. Aardvarks can dig fast or run in zigzag fashion to elude enemies, but if all else fails, they will strike with their claws, tail and shoulders, sometimes flipping onto their backs to lash with all fours. Their thick skin also protects them to some extent.

The 2002 South African IUCN red list places the aardvark in the least concern category. It was previously considered vulnerable but this was almost certainly the result of its elusive behaviour, making it difficult to see and and appear uncommon. In other southern African countries their status is probably least concern as well, but in central and east Africa, their status is less well documented. The most important factor in controlling aardvark populations is the abundance and distribution of their prey, ants and termites.

Another limiting factor is soil type (very shallow soils might restrict their range). Loss of habitat as a result of increasing human populations and possibly hunting (for traditional medicine and bush meat) are probably their greatest threats. In some areas they cause problems for farmers, whereby they dig under fences or digs holes in roads or farm dam walls. In such areas persecution of aardvarks may occur. Fortunately for aardvarks the threat of hunting is reduced by their nocturnal habits, which make them difficult animals to catch.

Find out more about animals that begin with the letter A