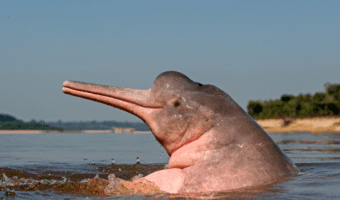 The Amazon river dolphin (Inia geoffrensis), also known as the boto, bufeo, pink dolphin or pink river dolphin, is a species of toothed whale belonging to the family Iniidae and the genus Inia.

The Amazon river dolphin is the largest species of river dolphin, with adult males reaching 185 kilograms (408 lb) in weight, and 2.5 metres (8.2 ft) in length. They also have one of the widest ranging diets among toothed whales, and feed on up to 53 different species of fish, such as croakers, catfish, tetras and piranhas.

This species is unfortunately classed as Endangered on the IUCN Red List, with human interference being one of the leading causes of decline in their population. They have traditionally been difficult to keep in captivity, due to their aggression and fairly short longevity. However, the Amazon river dolphin is the only species of river dolphin kept in captivity, mainly in Venezuela and Europe. 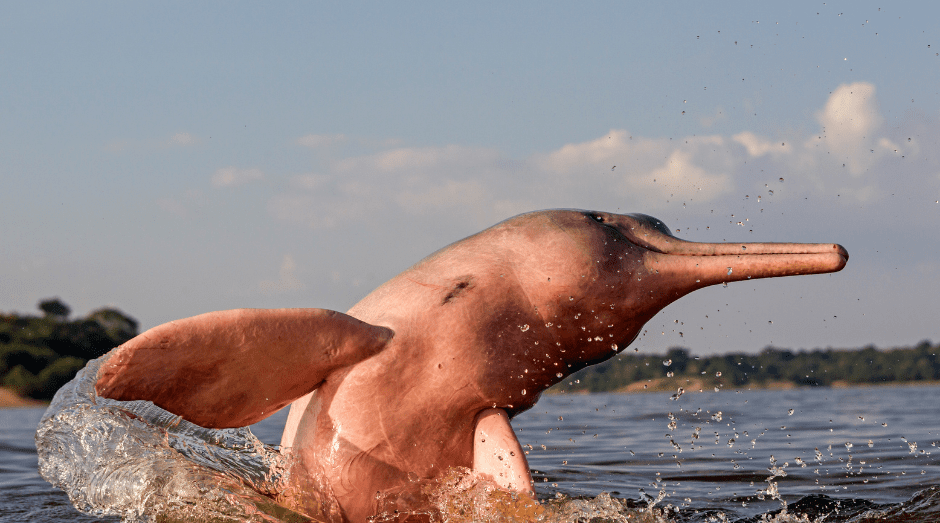 This species has very evident sexual dimorphism, with males measuring and weighing between 16% and 55% more than females. This is unique amongst river dolphins, as females are generally larger than males in dolphins.

These river dolphins have a robust and strong body, with broad and triangular flukes and a keel-shaped dorsal fin that is short in height but very long, extending from the middle of the body to the caudal region. The pectoral fins are large and paddle-shaped. The river dolphin’s long fins mean it can perform circular movements and can manoeuvre through vegetation in flooded forests.

The Amazon river dolphin has a long, thin snout, with 25 to 28 pairs of long and slender teeth to each side of both jaws. It has a melon on the head, the shape of which can be modified by muscular control when used for biosonar. Unlike in oceanic dolphins, the cervical vertebrae of the river dolphin are not fused, allowing their heads to turn 90 degrees, making them very flexible.

Adults are primarily a light grey color, but turn pink as a result of repeated abrasion of the skin surface. Males tend to be pinker than females due to more frequent trauma from intra-species aggression.

Despite having small eyes, this river dolphin has good eyesight both in and out of the water.

The life span of an Amazon river dolphin in the wild is unknown. In captivity, they have lived to between 10 and 30 years old. However, the average longevity in captive animals is only 33 months.

The Amazon river dolphin has a very diverse diet and is the most diverse of the toothed whales. It consists of at least 53 different species of fish, grouped in 19 families. Their prey is usually between 5 and 80 centimetres (2.0 and 31.5 in) in size, and they most commonly eat fish from the families Sciaenidae (drums or croakers), Cichlidae (cichlids), Characidae (characins and tetras), and Serrasalmidae (piranhas). However, they will also eat river turtles and crabs. If their prey is too large, they will break it up before eating.

This species of river dolphin is a solitary feeder, usually feeding early in the morning and in the late afternoon. They consume about 5.5% of their body weight every day. They mostly prey near waterfalls and river mouths where river currents disrupt schools of fish and make them easier to catch.

Their diet is most diverse during the wet season, when the fish spread out into the floodplain and are more difficult to catch, and becomes more selective during the dry season when fish densities are higher. 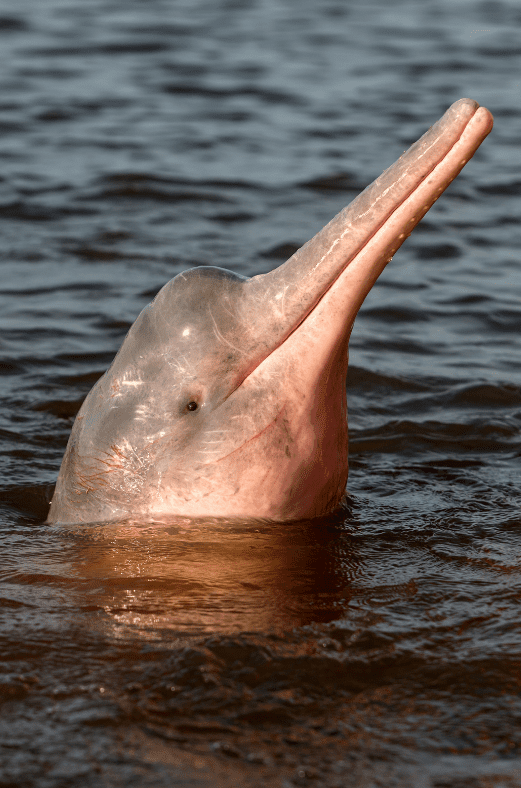 The Amazon river dolphin is a typically solitary animal, but can be seen in pairs or in threes (usually mother and calves). Sometimes, they are seen in pods, but these rarely contain more than eight individuals. Pods as large as 37 individuals have been seen in the Amazon, but average is three.

The river dolphin is most likely to be seen with other individuals in the summer, in areas with abundant food, and at the mouths of rivers.

These animals do not seem to have a social hierarchy, but violent acts are common between the dolphins, which can result in harm or even death. They are curious animals and are afraid of foreign objects.

They have been known to be playful though, too, and it is not unusual for them to rub against canoes and grasp canoe paddles, and they have been seen pulling grass under water, throwing sticks, and playing with logs and smaller animals.

Breathing takes place every 30 to 110 seconds. They do not dive very deep, and they rarely raise their flukes out of the water. When they surface, the tips of the snout, melon and dorsal fins appear simultaneously, and their tail rarely shows before diving. Only occasionally will they jump out of the water, but they can jump as high as (3.14 ft).

In captivity, these dolphins are very difficult to train, which is uncommon for a dolphin species. They are also much more shy than animals such as bottlenose dolphins.

Most Amazon river dolphins are sedentary and, although they undertake seasonal migrations correlated with water level and fish abundance, these trips are small and not far from the areas in which they inhabit for the rest of the year.

Amazonian rivers are often very murky, and the Amazon river dolphins likely use echolocation for navigation and to catch prey when they cannot use their sight. 45 kHz is the dominant frequency, which is not much different from the frequency of the bottlenose dolphin, although the clicks can range from 16-170 kHz. They’re also used as communication between individuals. These dolphins use whistling tones too as another form of communication.

It is unclear whether Amazon river dolphins are monogamous or not, but it is thought they most likely are not. Very aggressive sexual behavior in males has been observed, and they often have damaged fins, flukes, and blowholes due to biting and abrasion, which may indicate there is intense competition for access to females.

Males seem to initiate sexual activity by nibbling at the flippers or flukes of females, but if the females are not receptive, they might respond aggressively.

Breedings is seasonal and takes place between May and June. This birthing period corresponds with peak water levels in rivers, and since females remain in flooded areas longer than males, this offers several advantages. As water levels begin to decrease, the density of prey items in flooded areas begins to increase due to loss of habitat.

The gestation period for an Amazon river dolphin is about 11 months. Birthing is estimated to take between 4 to 5 hours and mothers give birth to single calves. Once the umbilical cords break, the mothers help their calves to the surface for air. The calves are about 0.80 m long at birth and are usually gray in color. They nurse for about a year, and are thought to be independent within two to three years.

Females usually give birth every 15 to 36 months and several individuals are known to have been lactating and pregnant simultaneously. It is thought that the bond between the mothers and her young is very strong, as pairs or groups in the wild usually consist of a mother and her calves.

The Amazon river dolphin is the most widespread of river dolphins. They are present in six countries in South America: Bolivia, Brazil, Colombia, Ecuador, Peru, and Venezuela, in an area covering about 7,000,000 square kilometres (2,700,000 sq mi). Their distribution is limited mainly by marine waters, impassable rapids, waterfalls, and excessively shallow parts of the rivers.

Within these waters, the Amazon river dolphin can be found in main rivers, small channels, river basins, canals, mouths of rivers, lakes, and just below waterfalls and rapids. The water level cycle exerts the strongest influence on habitat use by these dolphins during different parts of the year; in the dry season, the dolphins are usually located in the river beds, but in the rainy season, when the rivers overflow, they disperse to the flooded areas, both the forests and the plains.

Males and females appear to have different habitat preferences, with males returning to main river channels while water levels are still rising and females and their calves remaining in the flooded areas as long as possible. This may be due to the calmer waters preventing the younger river dolphins from being swept away, allowing them to rest and fish in a quieter environment. The lack of males in the area at this time may also be another factor for choosing to remain in the flooded areas — there is a lower risk of aggression and predation from other species. 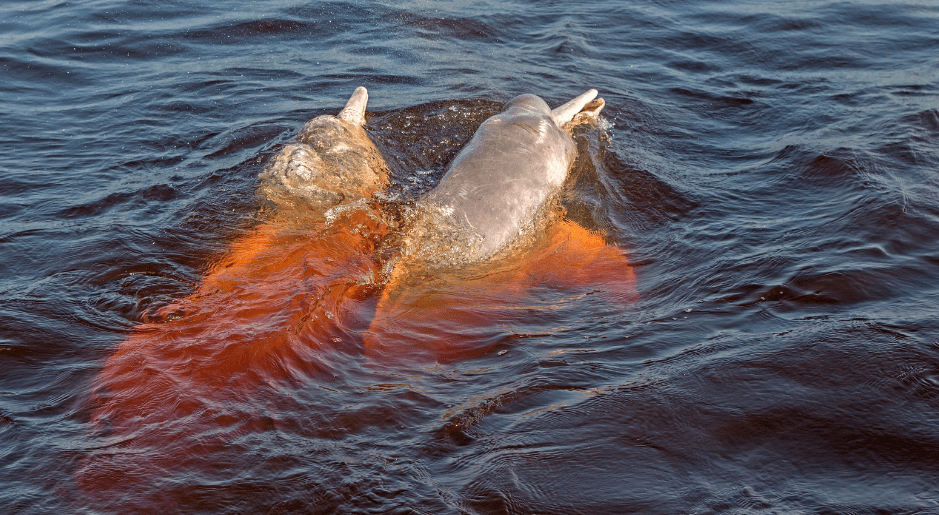 The Amazon river dolphin is classified as Endangered by the International Union for Conservation of Nature. Humans are to blame for the decline in these animals. Issues such as climate change, deforestation and killing by fisherman are the most likely causes for the dwindling numbers.

The Amazon river dolphin species has historically been kept in dolphinariums. Today, only one exists in captivity, at Zoologico de Guistochoca in Peru. These animals do not do well in captivity, with the last river dolphin kept in a US zoo dying in 2002. Unfortunately, if river dolphin numbers begin to dwindle to dangerously low levels in the wild, it would be alarming because populations may not be able to be maintained for long in captivity.

As fishing technologies have improved, the accidental catching of these river dolphins has greatly increased. During the process of catching the commercialized fish, the Amazon river dolphins get caught in the fishing nets and exhaust themselves until they die, or the local fishermen deliberately kill the entangled dolphins. The carcasses are discarded, consumed, or used as bait to attract a scavenger catfish. They have also been harpooned, shot, and poisoned for stealing fish out of nets and damaging the fishing equipment. In 2008, the International Whaling Commission (IWC) expressed concern for captured river dolphins for use as bait in the Central Amazon, which is an emerging problem that has spread on a large scale.

As pollution and deforestation increases, it has more and more of an effect of Amazon river dolphins. An altering to their environment can reduce hunting, feeding and reproduction levels. What’s more, the bigger the demand for fish for human consumption, the more fish that are caught and the less fish there are for this endangered species.

There are no known natural predators of Amazon river dolphins, but black caimans, bull sharks, anacondas, and jaguars could be potential predators.