You are here: Home / Animals / Jaguar 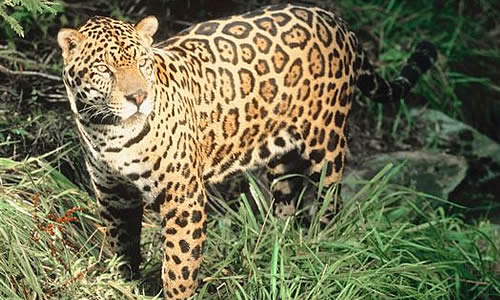 The base coat of the jaguar is generally a tawny yellow in colour, but can range to reddish-brown and black. The jaguar is covered in ‘rosettes’ for camouflage in its jungle habitat. The spots vary over individual coats and between individual Jaguars. The ‘rosettes’ may include one or several dots and the shape of the dots varies. The spots on the head and neck are generally solid, as are those on the tail, where they may merge to form a band. The underbelly, throat and outer surface of the legs and lower flanks are white.

Rare albino individuals, sometimes called ‘white panthers’, occur among jaguars, as with the other big cats.

The jaguar physically most closely resembles the leopard, although the jaguar is of sturdier build and its behavioural and habitat characteristics are closer to those of the tiger.

Jaguars are the second strongest of all mammals. The jaguar has a short, stocky limb structure which makes it well adaptable to climbing, crawling and swimming. Their heads are robust and their jaw is extremely powerful.

Jaguars are carnivores (meat-eaters). Jaguars will eat a variety of animals including birds, eggs and mammals including capybaras, peccaries, tapirs, turtles and alligators. Jaguars often bury their prey after killing it, so that they can eat it later. The jaguar is often described as nocturnal, but is more specifically crepuscular (peak activity around dawn and dusk).

The jaguar is a largely solitary, stalk-and-ambush predator and is opportunistic in prey selection. It is also an apex predator (predators that, as adults, are not normally preyed upon in the wild in significant parts of their range by creatures not of their own species) and a keystone predator, playing an important role in stabilizing ecosystems and regulating the populations of prey species.

The jaguar has developed an exceptionally powerful bite, even compared to the other big cats. This allows it to pierce the shells of armoured reptiles and to employ an unusual killing method. The jaguar bites directly through the skull of prey between the ears to deliver a fatal blow to the brain.

It has been reported that an individual jaguar can drag a 360 kilograms (800 pounds) bull 8 metres (25 feet) long in its jaws and crush the heaviest bones. The jaguar hunts wild animals weighing up to 300 kilograms (660 pounds) in dense jungle and its short and sturdy physique is therefore an adaptation to its prey and environment.

Jaguars are large, wild, graceful cats that live in rainforests, swamps, deserts and shrubby areas. These solitary felines often have dens in caves. It is strongly associated with the presence of water and is, along with the tiger, a very good swimmer. 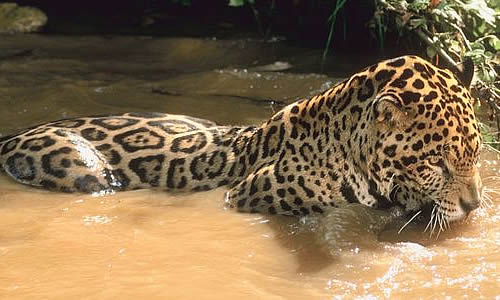 Jaguars are territorial. Like most cats, the jaguar is solitary outside mother-cub groups. Adults generally meet only to court and mate and carve out large territories for themselves. Female territories, from 25 to 40 square kilometres in size, may overlap, but the animals generally avoid one another. Male ranges cover roughly twice as much area, varying in size with the availability of game and space and do not overlap. Scrape marks, urine and faeces are used to mark territory.

Like the other big cats, the jaguar is capable of roaring (the male more powerfully) and does so to warn territorial and mating competitors away. Intensive bouts of counter-calling between individuals have been observed in the wild. Their roar often resembles a repetitive cough and they may also vocalize mews and grunts. Mating fights between males occur, but are rare. Conflict is typically over territory. A males range may include that of two or three females however he will not tolerate intrusions by other adult males.

Female jaguars reach sexual maturity at about 2 years of age and males at 3 or 4 years of age. The jaguar is believed to mate throughout the year in the wild, although births may increase when prey is plentiful. Female Jaguars estrous is 6 – 17 days out of a full 37 day cycle and females will advertise fertility with urinary scent marks and increased vocalization. Both male and female jaguars will range more widely than usual during courtship.

Mating pairs separate after mating and females provide all the parental care. The gestation period lasts 93 – 105 days. Female Jaguars give birth to up to 4 cubs but most commonly to only 2 cubs. The mother will not tolerate the presence of males after the birth of cubs, given a risk of infant cannibalism. This behaviour is also found in the tiger. 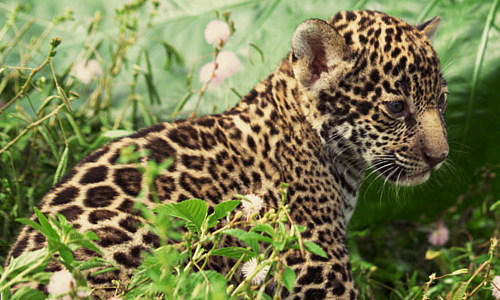 The young are born blind, gaining sight after 2 weeks. Cubs are weaned at 3 months but remain in the birth den for 6 months before leaving to accompany their mother on hunts. They will continue in their mothers company for one to two years before leaving to establish a territory for themselves. Young males are at first leave, jostling with the older jaguars until they succeed in claiming a territory. Typical life span of the jaguar in the wild is estimated at around 12 – 15 years. In captivity, the jaguar lives up to 23 years, placing it among the longest living cats.

Jaguars are an endangered species due to loss of habitat and over-hunting by man and its numbers are declining.

All hunting of jaguars is prohibited in Argentina, Belize, Colombia, French Guiana, Honduras, Nicaragua, Panama, Paraguay, Suriname, the United States (where it is listed as endangered under the Endangered Species Act), Uruguay and Venezuela.

Hunting of jaguars is restricted to ‘problem animals’ in Brazil, Costa Rica, Guatemala, Mexico and Peru, while trophy hunting is still permitted in Bolivia. The species has no legal protection in Ecuador or Guyana.

Current conservation efforts often focus on educating ranch owners and promoting ecotourism (a form of tourism that appeals to the ecologically and socially conscious individuals). The jaguar is generally defined as an ‘umbrella species’ a species whose home range and habitat requirements are sufficiently broad that, if protected, numerous other species of smaller range will also be protected. Umbrella species serve as ‘mobile links’ at the landscape scale, in the jaguars case through predation. Conservation organizations may therefore focus on providing viable, connected habitat for the jaguar, with the knowledge that other species will also benefit.