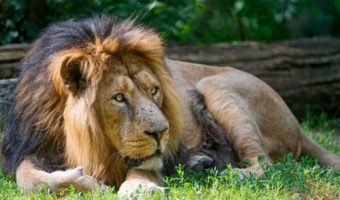 The Asian Lion (Panthera leo persica) is a subspecies of the lion which survives today only in India and therefore it is also known as the Indian lion. Asian Lions once ranged from the Mediterranean to India, covering most of Southwest Asia where it was also known as the Persian Lion.

The current wild population of Asian Lion consists of about 350 individuals restricted to the Gir Forest in the state of Gujarat, India, and is under the private protection of the ruler of the small state. The Asian lion habitats include tropical dry forests, tropical grasslands, deserts and semi-deserts.

Compared to their African cousins, Asian lions have shaggier coats, with a longer tassel on the end of the tail and longer tufts of hair on the elbows. The most noticeable physical characteristic found in all Asian lions, but rarely in African lions, is a longitudinal fold of skin running along their belly.

The mane of the Asian lion is generally shorter than that of the African lion, so the ears are always visible. Asian lions are, in general, slightly smaller than African lions.

Like all cats Asian lions are equipped with powerful retractable claws and long sharp canine teeth that are used in dragging their prey to the ground.

Like their African cousins, Asian lions are highly sociable animals living in social units called prides. The Asian lion pride is smaller. Studies have shown that most Gir prides contain just two adult females as compared to the average African pride which contains 4 to 6 adult females.

The largest recorded female coalition of Asian lionesses is a group of five. However, it must be said that despite the small population and habitat area, few individual animals are known. The male Asian lions are less social and only associate with the pride when mating or on a large kill. It has been suggested that this may be because their prey animals are smaller than those in Africa, requiring fewer hunters to tackle them.

Like African lions, hunting is a cooperative affair but adult males rarely participate. If vegetation is sparse, hunting usually takes place at night, but where it is thick, it may also take place during the day. The lions use stealth to approach their prey and then charge and either grab or knock it down before it outruns them. Only one in about four charges ends successfully. Lions are inactive for most of the day, spending up to 20 hours per day resting or sleeping.

The cubs start eating meat at about 3 months of age while continuing to suckle for up to 6 months. They spend 9 months perfecting their hunting skills, become independent aged one and reach maturity at 3 to 4 years. Cub mortality is high, up to 80% may die before 2 years of age. The life span of the Asian lion is 16 – 18 years.

Asian lions are classed as critically endangered animal. Official protection by the imperial government was given in 1900, however, with increasing human population, overgrazing, and destruction of forest cover, suitable habitat was reduced to about 1,300 square kilometres. In 1957, three African lions, hardly different from their Asian relatives, were released in the Gir Forest sanctuary. Their increase has indicated that such an approach may ensure the continued existence of the lion in Asia. About 85 Asian lions survive in captivity.

Asian lions in the past have rarely attacked humans, however, in recent years, attacks on humans have been on the increase. The reason seems to be that restricting the entry of cattle that previously roamed the park has left the lions lacking a key food source and hungry lions sometimes look to humans, whose numbers in the area have increased dramatically, for their next meal.