You are here: Home / Animals / The Atlantic Wolffish 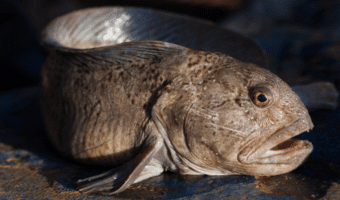 The Atlantic wolffish (Anarhichas lupus) is also known as the seawolf, Atlantic catfish, ocean catfish, devil fish, wolf eel, woof or sea cat. It is a marine fish of the wolffish family Anarhichadidae and is native to the North Atlantic Ocean. It belongs to the genus Anarhichas and the order Scorpaeniformes.

These fish are easily recognized with their interesting and protruding teeth, similar to those of a wolf, from which it gets its common name. However, the similarities between the animals stop there! These teeth are very strong and allow the Atlantic wolffish to crush the hard shell of mollusks and crustaceans almost instantly.

The Atlantic wolffish population is rapidly being depleted in US waters, which is most likely down to overfishing. They are listed as a Species of Concern according to the U.S. National Oceanic and Atmospheric Administration’s National Marine Fisheries Service, however are Data Deficient on the IUCN Red List. 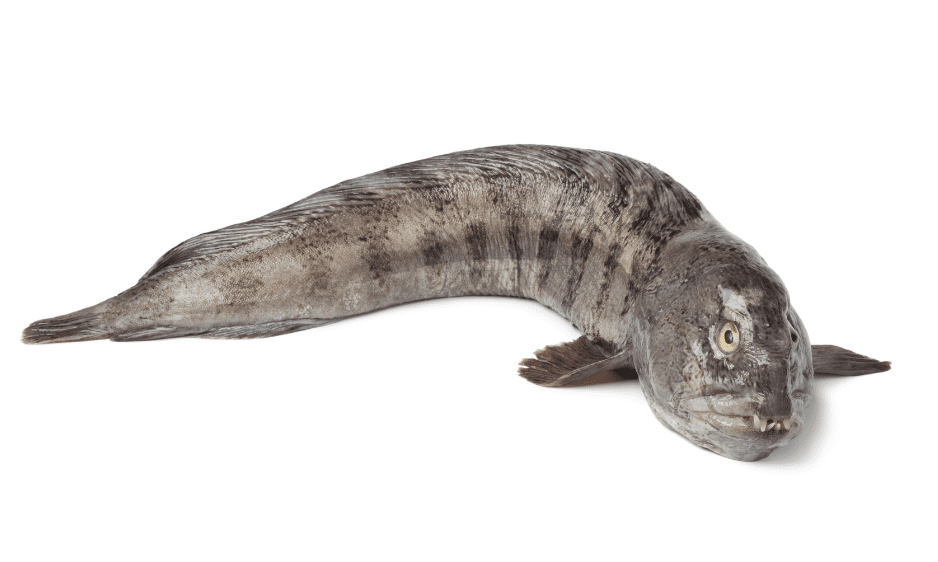 The Atlantic wolffish is a very big fish, which can grow up to 5 feet long and weigh up to 18 kg (40 lb). Their bodies are subcylindrical in front, compressed in the caudal portion. Instead of having rough scales, their skin is smooth and slippery and the scales are embedded and almost hidden in the skin.

Atlantic wolffish vary in color, but are usually purplish-brown, a dull olive green, or blueish gray. They also have an even dorsal fin that extends the whole length of the back, and a similar one that extends from the caudal fin to the vent.

These fish do not have pelvic fins, but they do have large, rounded pectorals. Their bodies actually resemble an eel, meaning they swim by moving their body from side to side.

The Atlantic wolffish’s teeth are one of its most defining characteristics. Some of these are seen protruding from the mouth, which gives them a somewhat scary appearance! Both the lower and upper jaws have four to six fang-like, strong, conical teeth. Behind the conical teeth in the upper jaw, there are three rows of crushing teeth. The central row has four pairs of molars and the outer rows house blunted conical teeth. The lower jaw has two rows of molars behind the primary conical teeth. The wolffish’s throat is also scattered with serrated teeth. All of these teeth allow them to eat hardshell fish, crushing them as they chew. They do actually not eat any soft fish.

These fish fish can live to be around 20 years old. 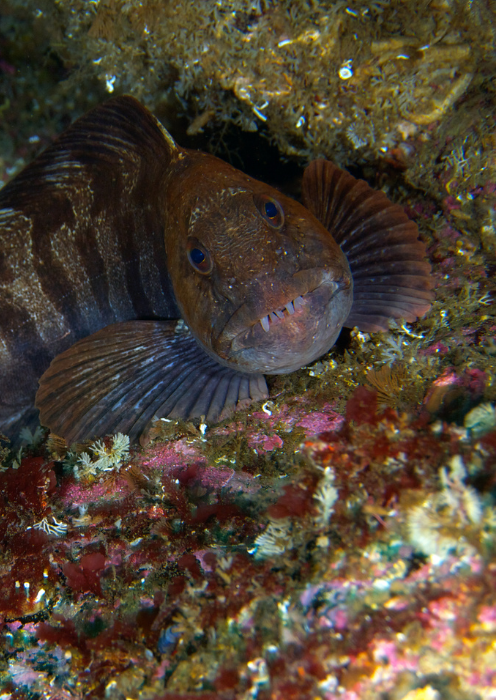 They eat hardshell molluscs, crustaceans, and echinoderms. With their special teeth, they are well-designed to eat these type of animals and can crush them while chewing. They also eat large hermit crabs, sea clams, cockles, large whelks, sea urchins, and green crabs, and starfish. They do not eat any other type of fish.

Atlantic wolffish are an important predator of sea urchins and green crabs, whose populations escalate rapidly and can negatively affect the health of a marine system

Wolffish are primarily stationary fish and rarely move from their rocky homes. They do not like to travel far, but will take short journeys to search for food.

Atlantic wolffish form breeding pairs in spring to summer and mate in the fall. Their method of fertilizing their eggs is much different from most fish species, as females do not deposit eggs in the open ocean for the male to fertilize. Instead, the eggs are fertilized inside the female. One female can produce anywhere from 5,000 to 12,000 eggs in her lifetime! The size of the fish affects the number of eggs, with larger females laying more.

Both the males and females help to protect the eggs once they have been laid on the ocean floor. The eggs are the largest of any fish, with sizes of 5.5 to 6mm diameters. They have an opaque, yellowish tint and clump together. The eggs hatch after anywhere between three and nine months, depending on the water temperature.

During the larvae stage, they stay at the bottom of the ocean close to the hatch site. It can take a few hours to one week before the larvae are ready to venture into the water column, where they’re pelagic for two weeks to two months.

Atlantic wolffish do not reach sexual maturity until quite late, at around eight to ten years old.

As their name suggests, Atlantic wolffish are found in the North Atlantic Ocean. They inhabit both the west and east coasts of the Atlantic. In the west Atlantic, they are present as far north as the Davis Strait, of the Canadian territory of Nunavut, populating the shores of Greenland, Newfoundland, and Nova Scotia, extending as far south as Cape Cod. The most dense populations are in Georges Bank, the Gulf of Maine and the Great South Channel. In the east Atlantic, they range from Russia’s White Sea and Novaya Zemlya, through the Nordic countries and British Isles, to the Bay of Biscay.

The wolffish contains a natural antifreeze to keep their blood moving smoothly even in near-freezing waters. 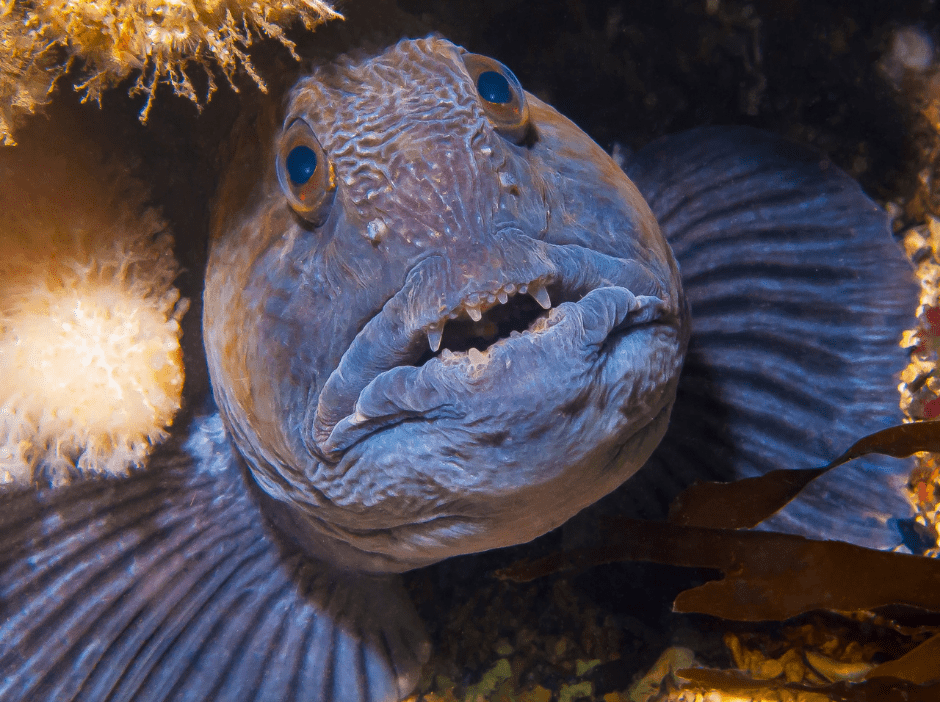 Atlantic wolffish are often caught unintentionally by fisherman in their fishing nets. They are also at risk of otter trawling, where large nets are dragged along the ocean floor, which can cause significant damage to the wolffish’s rocky habitat and catch them in the nets during the process.

The slow sexual maturity rate of Atlantic wolffish can put the species population at severe risk from humans. If wolffish are captured for commercial fishing before they reach the age of sexual maturity, the amount of these fish in our seas is going to decline rapidly.

Climate change and global warming is another risk to Atlantic wolffish. These animals thrive in very cold waters, and the increasing temperature of the seas can not only affect the wolffish but also their habitat and prey.

Atlantic wolffish do not have many natural predators in their environments. The only predator that would attack them is the Atlantic cod. However, young wolffish are at risk of being eaten by Atlantic cod, Greenland sharks, gray seals, haddock, and some spotted wolffish.