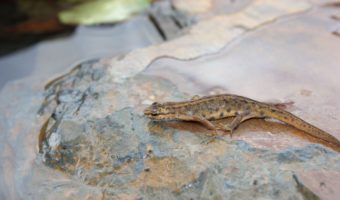 Common Newt The Common Newt (Triturus vulgaris) is also known as the Smooth Newt and is one of the commonest amphibians in Europe, however, they are absent from Iberia, southern France, southern Italy and most Mediterranean islands. They are also found in Russia and western Asia. The common newt is one of three native newt species.

All newts are amphibians. The Common Newt has the widest distribution of our native newts.

Common newts measure around 7 – 11 centimetres in length from head to tail. Male and female newts are difficult to tell apart as both are of similar size and have a similar pale brown to yellow coloration. There are only two visible differences in which one can tell them apart. 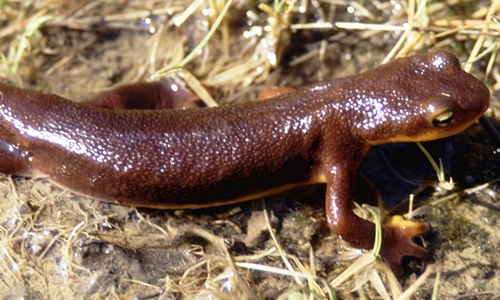 Firstly, the male newt has a single black line running down the centre of the spine, the females have two parallel lines either side of the centre. Secondly, On closer inspection, one can clearly see that the males cloaca (the posterior opening from which they excrete both urine and faeces) is very swollen, whilst the females is nearly invisible.

Breeding season is the best time to tell the male from the female common newt. During this period the male develops a wavy, transparent crest along the spine and tail. Each wave is topped by a black mark. The bright orange belly has black spots. Females are smaller and also develops spots, but not on the stomach area, which is paler than the males and their spots are generally smaller. The females do not develop crests. As they grow, Common newts shed their skin once a week. Males are also distinguishable from females by their fringed toes.

Common newts can be found in a variety of habitats outside the breeding season, inhabiting deciduous woodland, wet heathland, bogs, marshes, gardens, parks and farmland. They prefer standing water with plenty of weeds, such as lake margins, ponds and ditches, in which to breed.

Common newts feed upon insects, caterpillars, worms and slugs which is their main diet on land, while in the water, insects, crustaceans, mollusks and tadpoles are eaten. Newts do not use their tongues to catch their prey in the water, instead, they have tiny teeth which they use to grab onto their prey. Newts tend to hunt for their prey near the surface of the water.

Common Newts emerge from hibernation in March, they breed through to May and generally the adult newts leave the water in July. They are one of the most terrestrial of the newts in Europe. When newts surface from the water for air, they make a characteristic ‘popping’ sound. Newts are nocturnal animals and sleep under stones or compost heaps during the day.

During courtship the male newt ‘displays’ for his prospective mate by vibrating his tail in front of the female and waft glandular secretions towards her by fanning his tail in her direction. This stimulates the female to approach him. The male then deposits a sperm-containing capsule, known as a spermatophore, in front of his mate, who manoeuvres herself into a position whereby she can pick up the capsule with her cloaca – fertilization occurring inside the female. After a few days, the female begins to lay eggs individually, usually under aquatic plant leaves at a rate of 7 to 12 eggs per day. Altogether a total of 400 eggs may be produced over the season.

After 2 to 3 weeks (depending on water temperature) the eggs hatch to a larval form – a tadpole. For a few days the tadpoles live off the food reserves contained within their yolk sacs (left over from the egg stage). After this they start to eat freshwater plankton, and later insect larvae and mollusks. Unlike frog tadpoles, newts are carnivorous throughout their life. The larvae have external gills, which absorb oxygen directly from the water. About 10 weeks later they have metamorphosed into air-breathing juveniles. They are known as ‘efts’ at this time and some may leave the water. They become sexually mature at 3 years of age. The average life span of a newt is 6 years although it is possible for them to survive for 20 years.

Newts are protected in Europe. There are laws prohibiting the killing, destruction and the selling of newts. While the species is by no means endangered, IUCN lists insufficient data to make an assessment for two of the subspecies.

In the UK, the Common newt is protected under Schedule 5 of the Wildlife and Countryside Act (1981) with respect to sale only. It is therefore illegal to sell individuals of the species, but their destruction or capture is still permitted. They are also listed under Annex III of the Bern Convention. The Common newt is the only newt native to Ireland and it is protected there under the Wildlife Acts [1976 and 2000]. It is an offence to capture or kill a newt in Ireland without a licence.