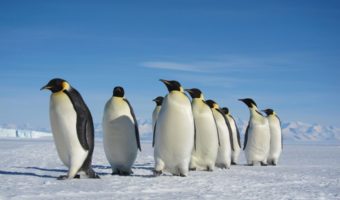 The Emperor Penguin stands 115 centimetres (45 inches) in height and weighs 35 – 40 kilograms (77 – 88 pounds) and is the tallest and heaviest of all living penguin species. It is the only penguin that breeds during the winter in Antarctica. Emperor Penguins typically live for 20 years, however, some records indicate a maximum life span of around 40 years. The Emperor Penguin should not be confused with the closely related King Penguin or the Royal Penguin.

Emperor Penguins have a big head, a short, thick neck, a streamlined shape, a short, wedge-shaped tail and tiny, flipper-like wings. Both male and female are alike, with blue-grey upper parts and blackish-blue heads adorned with large white and yellow ear patches.

Their under parts are mostly white but with the upper breast showing a pale yellow. The shape of their body helps them to survive. Emperor Penguins have short wings that help them to dive up to 900 feet to catch larger fish.

Emperor Penguins can swim 10 – 15 kilometres an hour which lets them escape their main enemy, the leopard seal.

Emperor Penguins can stay warm because they have a thick layer of down under the outer feathers and a layer of blubber. The layer of downy feathers trap air that keeps the body heat in and cold air and water out. Emperor Penguins also have large amounts of body oil that aids in keeping them dry in the water.

Unlike most penguins, which feed on surface krill, emperor penguins live on fish, squid and crustaceans caught on long, deep pursuit dives. They will quite often reach depths of more than 700 feet and remain submerged for up to 18 minutes. 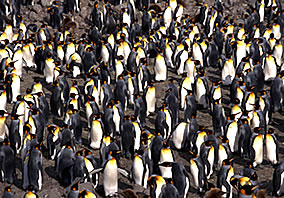 Emperor Penguins are social animals, both foraging and nesting in groups. In severe weather the penguins huddle together for protection. They may be active day or night. Sexually mature adults travel throughout most of the year between the nesting area and foraging areas in the ocean.

From January to March, Emperor Penguins disperse into the oceans, traveling and foraging in groups.

Emperor penguins establish loose breeding colonies on the pack ice surrounding the Antarctic continent. In May, female Emperors will lay a single egg after a 63 day gestation period, and then will pass the egg over to her mate while she goes off to sea to feed.

Male Emperor Penguins will be unable to eat during the ensuing 9 week incubation period. Instead, he must keep his egg warm by balancing it on his feet, where it is insulated by a thick roll of skin and feathers called the ‘brood pouch’. For added warmth and protection against the bitter winds and sub-zero temperatures, the male Emperor Penguins huddle together in tight bunches. After the eggs have hatched, young chicks will remain in the ‘brood pouch’ for a short time until they are able to regulate their own body temperatures.

By the time the female returns to take over feeding the chick, the male will have lost up to a third of his body weight. He must now make another long trek over the ice, up to 60 miles to find food. By January, as the sea-ice begins to break out, the chicks have lost most of their soft silvery-grey down and are now able to head out independently for the open sea.

In the wild, Penguin predators include Antarctic giant petrels (Macronectes giganteus), Leopard seals, orca, skua, and sharks. Abandoned sled dogs and their offspring formerly preyed upon penguins before the removal of dogs from Antarctica.

Emperor penguins are not classified as endangered by the 2000 IUCN Red List.