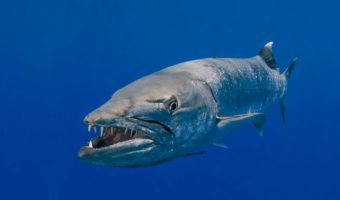 These fish survive on a diet of other fish, cephalopods, and occasionally shrimp, using their maneuverability to hunt. They are generally solitary animals, although younger fish will congregate in shoals.

The great barracuda is currently listed as Least Concern on the IUCN Red List, although are a popular target for recreational fishing, due to the strong fight they put up when hooked. They are an aggressive animal, and have been known to attack humans, especially if they mistake divers for large predators. 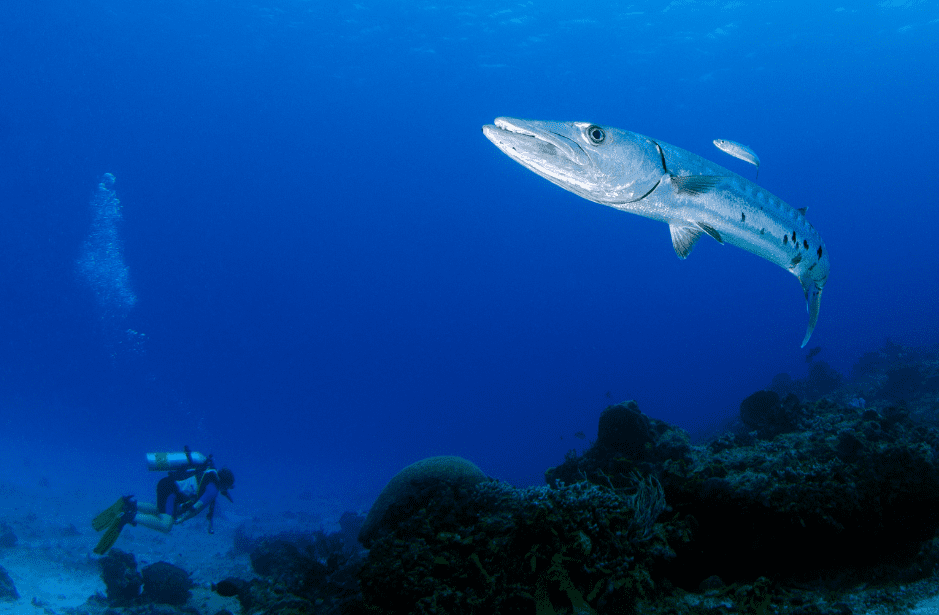 They have large scales and a pointed head with a large mouth. Because of their shape, fisherman used to think that barracudas were closely related to pikes. Their teeth are long and knife-like. Their lower jaw projects to help them bite, and their fang-like teeth are unequal in size and set in sockets in the jaws and on the roof of the mouth.

The great barracuda has an average lifespan of around fourteen years.

The great barracuda is a piscivore at all ages, preying on killifishes, herrings, sardines, gobies, silversides and anchovies as juveniles. As adults, they prey on larger fish species, like mackerel, or even dolphins.

Their large gape allows them to feed on large fish by chopping them in half. They are voracious predators and hunt by ambush, using short bursts of energy that allows them to swim up to 27 mph (43 km/h) to chase prey. Their long and thin bodies allow them manoeuvre with ease through the water, but they are also known to sit-in-wait for prey to come close. 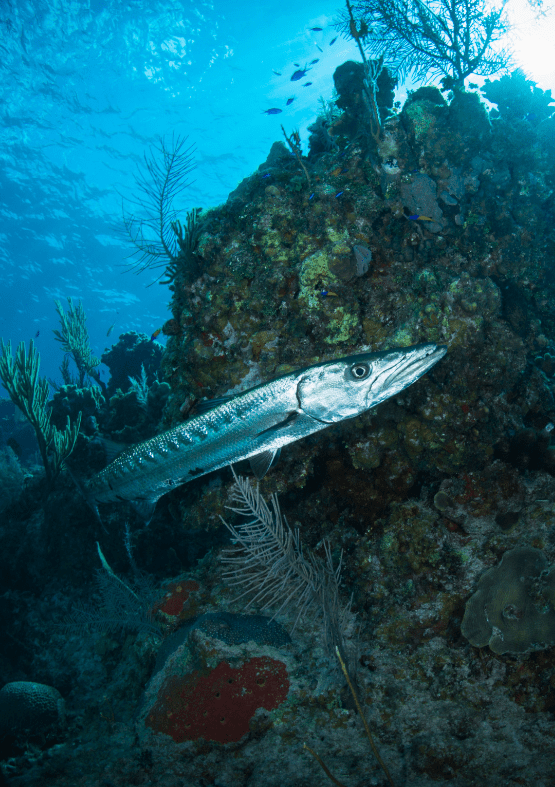 Great barracudas are generally solitary animals, especially at night. During the day, adults and juveniles can occasionally be seen traveling in schools, helping each other hunt for food and protecting each other from predators.

These fish are known to be quite aggressive, and have been known to attack humans and inflict serious injury in the past. The majority of these attacks have been on divers, which may have been mistaken for predators. Barracudas may mistake objects that glint and shine for prey. Usually, a barracuda will only attack when provoked.

Barracudas tend to spawn from April to October, and females can release about 5,000 to 30,000 eggs. These fish do not care for their eggs, and leave them to drift out into the ocean.

Once the fish have spawned, they enter shallow waters with weedy areas on the margins of clear-water estuaries. When they are around 80 mm long, they move to the deeper waters of adjacent reed beds. At about 300 mm they will move to open waters and, when fully grown, they will move out of the estuaries completely.

The great barracuda is found in nearly all warm seas, including the Indian, Pacific and Atlantic oceans. It is only absent from the Eastern Pacific. These fish generally reside in and around the edges of coral reefs, seagrasses, and mangroves, in water temperatures of between 74°F and 82°F. They predominantly live at or near the surface, although they are at times found at depths to 325 feet (100m).

They will avoid brackish water unless they are getting ready to spawn, and post-larvae live on the margins and in the estuaries where they are protected. When they get large enough to protect themselves, they will move out into the open ocean and then to the margins of the coral reefs.

The great barracuda is listed as Least Concern on the IUCN Red List. These fish are a popular target for recreational fishing, largely due to the fight they put up when they are caught. They are also caught for their meat, although little of this meat is eaten in the United States.

These fish are known for the pungent odor they release upon being caught. Their meat can also cause Ciguatera fish poisoning when eaten, which can be a serious illness.

There are very few predators that are actually fast enough to catch the great barracuda. The main predators of these animals are sharks, tuna and goliath grouper.

How big are great barracudas?

Great barracudas are fairly large, and can measure up to 100 cm (39 in) in length.

Where do great barracudas live?

Great barracudas live in and around the edges of coral reefs, seagrasses, and mangroves, in warm seas, such as the Indian Ocean, the Pacific Ocean and the Atlantic Ocean. As young, they often live in estuaries until they are big enough to defend themselves in the sea.

Are great barracudas dangerous to humans?

These barracudas can be dangerous to humans, and attacks and even fatalities have been recorded. These attacks are usually on divers, who the barracuda mistakes for a predator and tries to attack. They often mistake objects that glint and shine for prey. However, great barracudas will rarely attack without being provoked.

There are around 26 species of barracuda in the genus Sphyraena. Here are some species in further detail.

The yellowtail barracuda (Sphyraena flavicauda) is found in Indo-West Pacific oceans. It is gray in color on the back with a countershaded pattern of a white underside. The tail is yellow with black margins. These fish can grow to 60 centimetres (24 in) in length. 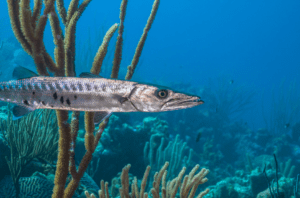 This barracuda usually reaches between 30 and 60 cm in length and can weigh at least 12 kg, making it the largest species of barracuda in the Mediterranean. It is dark above and silvery below.

The European barracuda is listed as Least Concern on the IUCN Red List.

These fish can reach a length of about 1.2 metres (3.9 ft) and a weight of about 6.8 kilograms (15 lb). They are of a brownish-bluish color on their front sides and are distinct from other barracudas due to their silvery shiny backsides, small scales, and the lack of bars or spots on their body.

Pacific barracuda are listed as Least Concern on the IUCN Red List. They are considered a huge sporting fish in California and are considered safe to eat. However, there are restrictions in place on fishing this barracuda, which has helped to stabilize populations.

The pickhandle barracuda (Sphyraena jello) is found in the Indo-West Pacific. It is silver in color with about 20 wavy bars on the sides of the body, which look like pickaxe handles and give the fish its name. It can grow up to 1.5 m in length.

The blackfin barracuda (Sphyraena qenie), also known as the Chevron barracuda, is found from the Red Sea and East Africa to the Indo and Western Pacific and as far as French Polynesia. It usually resides on coral reefs down to 50 m, in large schools.

This barracuda can reach a maximum size of 140 cm and are known for their long black lateral bands that go around their body.

This barracuda is greenish on its back, silvery on its flanks which fades to white on the belly and has a greenish-yellow tail. It reaches a maximum length of 1.1m and a weight of 5 kg. It is a popular fish with recreational anglers in Australia.

The Guachanche barracuda (Sphyraena guachancho) is found in the western and eastern Atlantic, at depths up to 100 m. They generally occur near muddy bottoms and are often found in estuaries. This barracuda can grow up to 200 cm in length and can weigh as much as 1.75 kg.

Guachanche barracuda is listed as Least Concern on the IUCN Red List. They are eaten as food and are usually sold fresh or salted.

The obtuse barracuda (Sphyraena obtusata) is found in the Indo-Pacific at depths from 5 to 200 m. It reaches a length of up to 55 cm and it is usually green above and silvery below.

Heller’s barracuda (Sphyraena helleri) is found in the Indian Ocean and the Pacific Ocean, around coral reefs and bays. They can reach a length of 40 to 80 centimetres (16 to 31 in), and are silvery in color with a horizontal blue stripe and two yellowish stripes on the sides.