You are here: Home / Animals / Shark 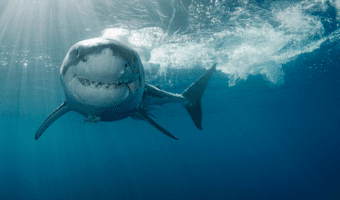 In some shape or form, Sharks have been around for about 400 million years.

Even before dinosaurs roamed the earth, sharks hunted through our oceans and even in some rivers and lakes. Sharks are such good survivors that they have had little need to evolve in the last 150 million years.

There are about 360 different species of sharks, which are divided into 30 families. These different families of sharks are very different in the way they look, live and eat. Sharks have different shapes, sizes, colors, fins, teeth, habitats, diets, personality, method of reproduction and other attributes.

Some types of shark are very rare (like the Great White Shark and the Megamouth Shark) and some are quite common (like the Dogfish Shark and Bull Shark). Sharks belong to the group of cartilaginous fish, the ‘Elasmobranchii’, that includes the Sharks, Rays and Skates.

Sharks are some of the worlds most misunderstood predators, as they never attack humans unless intimidated. These ancient predators fascinate people everywhere.

Unlike bony fish, sharks have no bones – their skeleton is made of cartilage, which is a tough, fibrous substance, not nearly as hard as bone. Sharks have a streamlined body shape that glides smoothly through the water and contains five to seven gill slits which they use to respire. 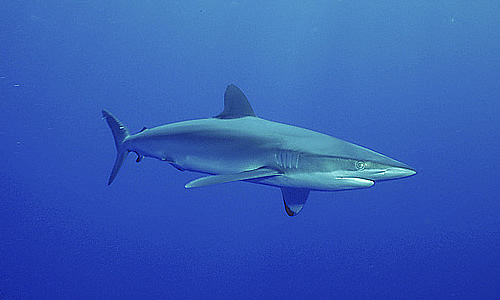 Some bottom-dwelling sharks such as the Angel Shark have flat bodies that allow them to hide in the sand of the ocean bed. Some sharks have an elongated body shape like the Cookiecutter Sharks and Wobbegongs. Sawsharks have elongated snouts, Thresher sharks have a tremendously elongated upper tail fin which they use to stun prey and Hammerheads have extraordinarily wide heads. The Goblin Shark has a large, pointed protuberance on its head, its purpose is unknown. 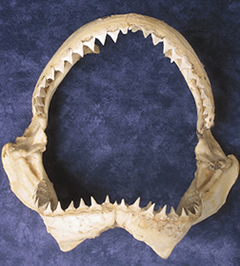 Sharks have a covering of dermal denticles (small outgrowths which cover the skin) to protect their skin from damage, parasites and to improve fluid dynamics. Sharks have the most powerful jaws on the planet. Unlike most animals, both the sharks upper and lower jaws move.

A shark bites with its lower jaw first and then its upper jaw. It tosses its head back and forth to tear loose a piece of meat which it swallows whole.

Each different species of shark has a different shaped tooth depending on their diet. Because the sharks teeth are replaceable, they may grow and use over 20,000 teeth in its lifetime.

Sharks include species from the very small pygmy shark (Euprotomicrus bispinatus), a deep sea species of only 22 centimetres in length, to the whale shark (Rhincodon typus), the largest fish, which grows to a length of approximately 12 metres (39.36 feet) and which, like the great whales, feeds only on plankton through filter feeding (straining suspended matter and food particles from water). In general, sharks swim or cruise at an average speed of 8 kilometres per hour (5 miles per hour), but when feeding or attacking, the average shark can reach speeds upwards of 19 kilometres per hour (12 miles per hour).

Normally, sharks eat alone. However, sometimes one feeding shark attracts others. They swim up as quickly as possible and all begin to try to get a piece of the prey. Sharks bite wildly at anything that gets in their way, even each other. Almost all sharks are carnivores or meat eaters. Sharks live on a diet of fish and sea mammals (like dolphins and seals) and even such prey as turtles and seagulls.

They are not all fierce carnivores. Some are quite harmless. Strangely enough, the most harmless sharks tend to be the largest sharks. The Basking Shark, the Whale Shark and the Megamouth Sharks all fit this description. These huge sharks eat plankton, a tiny shrimp-like creature found in the ocean. To do this, they swim forward with their mouths wide open. ‘Gill rakers’ at the back of their throat strain the tiny food from the water and is called filter feeding (as mentioned above). 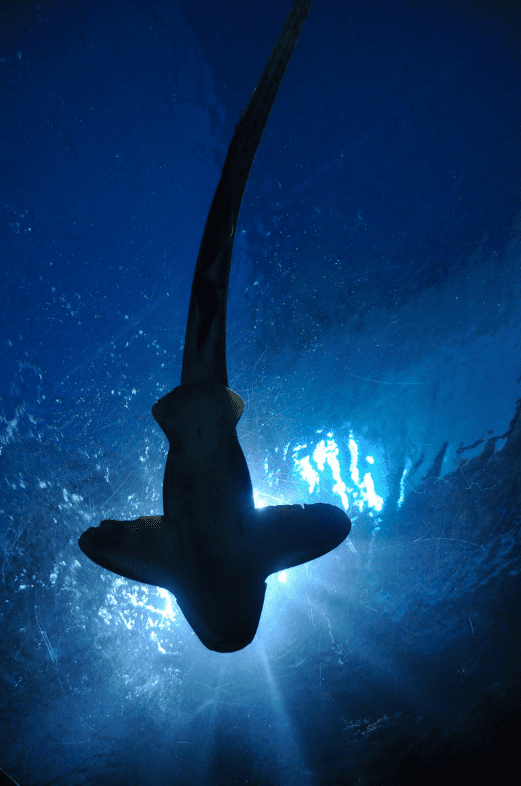 Male and female sharks can easily be identified. Males sharks have modified pelvic fins which have become a pair of claspers. The name is somewhat misleading as they are not used to hold on to the female, but fulfil the role of the mammalian penis. During mating the more flexible sharks wrap around each other, the male usually curling around the female. In less flexible sharks the male and female float parallel with each other while the male inserts a clasper into the females oviduct (the passage from the ovaries to the outside of the body).

Female sharks in many of the larger species have bite marks that appear to be a result of a male grasping them to maintain position during mating. The bite marks may also come from courtship behaviour: the male may bite the female to show his interest. In some species, females have evolved thicker skin to withstand these bites.

Sharks have a different reproductive strategy than most fishes. Sharks do not mass produce, instead they have between 1 – 100 pups at a time. Blue Sharks have been recorded to have had 135 offspring whereas some sharks have as little as two. No shark species are known to provide post-natal parental protection for their young, but females have a hormone that is released into their blood during the pupping season that apparently keeps them from feeding on their young.

There are three ways a shark pup can be born:

Oviparity – Some sharks lay eggs. In most of these species, the developing embryo is protected by an egg case with the consistency of leather. Sometimes these cases are corkscrewed into crevices for protection. Sometimes the egg cases are washed up onto the beach and are known as ‘the Mermaids Purse. Sharks that give birth this way include: the Horn Shark, Catshark, Port Jackson Shark, and the Swellshark.

Viviparity – These sharks maintain a placental link to the developing young, more similar to mammalian gestation than that of other fishes. The young are born alive and fully functional. Hammerheads, the Requiem Sharks such as the Bull Shark and the Tiger Sharks, the Basking Shark and the Smooth Dogfish fall into this category. Dogfish have the longest known gestation period of any shark, at 18 to 24 months. Basking Sharks and Frilled Sharks are likely to have even longer gestation periods.

Ovoviviparity – This is the most common method used by sharks. The young are nourished by the yolk of their egg and by fluids secreted by glands in the walls of the oviduct. The eggs hatch within the oviduct and the young continue to be nourished by the remaining parts of the yolk and the oviducts fluids. As in viviparity, the young are born alive and fully functional. Most ovoviviparous sharks give birth in sheltered areas, including bays, river mouths and shallow reefs. They choose such areas because of the protection from predators (mainly other sharks) and the abundance of food. 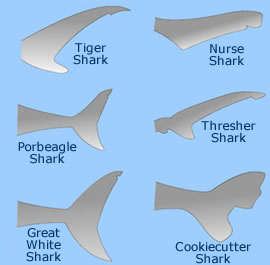 Shark tails (caudal fins) vary considerably between species and are adapted to the lifestyle of the shark. Their tail provides thrust and so speed and acceleration is dependent on tail shape. Different tail shapes have evolved in sharks adapted for different environments. The Tiger Sharks tail has a large upper lobe which delivers the maximum amount of power for slow cruising or sudden bursts of speed.

The Tiger Shark has a varied diet and because of this it must be able to twist and turn in the water easily when hunting, whereas the Porbeagle shark, which hunts schooling fishes such as mackerel and herring has a large lower lobe to provide greater speed to help it keep pace with its fast-swimming prey

Some tail adaptations have purposes other than providing thrust. The Cookiecutter Shark has a tail with broad lower and upper lobes of similar shape which are luminescent and may help to lure prey towards the shark. The Thresher shark feeds on fish and squid, which it is believed to herd, then stun with its powerful and elongated upper lobe.

The majority of shark fisheries around the globe have little monitoring or management. With the rise in demand of shark products there is a greater pressure on fisheries. Stocks decline and collapse because because sharks are long-lived apex predators with comparatively small populations, which makes it difficult for them breed rapidly enough to maintain population levels. Major declines in shark stocks have been recorded in recent years – some species have been depleted by over 90% over the past 20 – 30 years with a population decline of 70% not being unusual.

Many governments and the UN have acknowledged the need for shark fisheries management, but due to the low economic value of shark fisheries, the small volumes of products produced and the poor public image of sharks, little progress has been made. Many other threats to sharks include habitat alteration, damage and loss from coastal developments, pollution and the impact of fisheries on the seabed and prey species.