You are here: Home / Animals / Orangutan

The Orangutans (Genus: Pongo), are two species of great apes known for their intelligence, long arms and reddish-brown hair.

Native to Indonesia and Malaysia, they are currently found only in rainforests on the islands of Borneo and Sumatra, though fossils have been found in Java, Vietnam and China. Orangutans are the only surviving species in the genus ‘Pongo’. 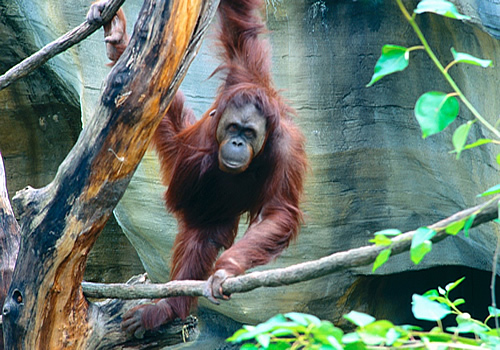 Fully mature males can be distinguished by their prominent cheek flanges and longer hair.

Sumatran orangutans have a long red/ginger coat. They have long facial hair, unlike their Bornean counterparts. Males may not develop cheek pouches and throat sacks until they are 20 years old and even then it may not happen at all.

Orangutans eat mostly fruit which makes up 60% of their diet. Fruits with sugary or fatty pulp are favoured. The fruit of fig trees are also commonly eaten since it is easy to both harvest and digest. Other food items include young leaves, shoots, seeds and bark. Insects and bird eggs are also included.

Orangutans are thought to be the sole fruit dispenser for some plant species including the climber species ‘Strychnos ignatii’ which contains the toxic alkaloid strychnine (a naturally occurring organic compound produced by a plant). It does not appear to have any effect on orangutans except for excessive saliva production.

Orangutans can be found in rainforests as well as other forests at higher elevations and near lowland swamps. They will sleep in trees as well as move through the trees in search of fruit. They live in the tropical rainforests and flood forests of Sumatra. Orangutans predominantly live in the underbrush and middle levels of trees.

Orangutans are the most arboreal of the great apes, spending nearly all of their time in the trees. Every night they make nests, in which they sleep, from branches and foliage. They are more solitary than the other apes, with males and females generally coming together only to mate.

Adult male and female orangutans are solitary. Females travel with their young until adolescence. Orangutans are diurnal and arboreal.

Orangutans are great tree climbers and spend a lot of time just hanging around. They have incredibly long arms that reach down to their ankles. Their arms are used to distribute their weight between branches. When they do venture down to the ground, they walk on all fours.

Orangutans make loud calls and shake branches to keep other males away. Air sacs in the throat, which extend under the arm pits and shoulders mean that these calls can be heard up to 1 kilometre away.

In the wild, a female Orangutan begins to breed between 9 and 12 years old. Gestation is 244 days. Orangutans will most often give birth to one infant, but like humans, they can have two.

Mothers stay with their babies until the offspring reach an age of six or seven years.

In captivity, female orangutans have given birth as young as seven years old.

Female Orangutans give birth to a single young every eight years. The baby is carried around by its mother until it is about 18 months old and can climb by itself. Young orangutans have white ‘spectacles’ of skin around their eyes which darken as they get older. In the wild Orangutans can live 45 – 50 years.