The Tropical Rainforest Biome is the most complex and diverse biome on earth. It is unique in both structure and species diversity. The equatorial climate has a consistent warm, humid temperature, abundant precipitation and heavy rainfall averaging 55 – 160 inches per year. It rains virtually everyday of the year, only briefly reducing in moisture for a short season.

Monsoon areas can become dry, however, they are more than compensated by the rest of the years precipitation and rain. The level of humidity and denseness of the vegetation give the ecosystem a unique water and nutrient cycle. The temperature in tropical rainforests rarely exceeds 93 – 97 degrees fahrenheit and usually does not drop below 65 – 68 degrees fahrenheit. 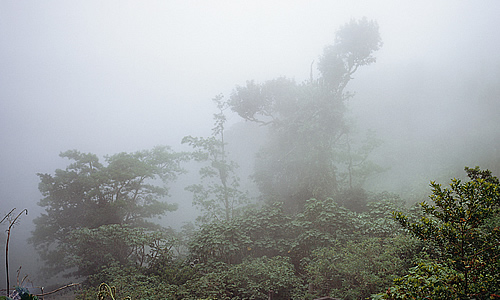 The tropical forest biome contains more plant life and animal life than anywhere else on the planet. Scientists estimate that more than half of all the worlds plant and animal species live in tropical rain forests. There are over 300 different types of tree in these forests that make up 70% of the total plant life.

Many trees have very tall, straight trunks that branch out 100 feet or more. Tropical rainforests have four distinctive layers, also known as ‘stratas’. They are known as the:

Emergent Layer – the highest of the layers with most trees reaching 100 – 250 feet high.

Upper Canopy Layer – this layer is referred to as the ‘umbrella layer’. Trees grow to 60 – 130 feet in height and there is reduced light due to the great upper layer. Most rainforest animals inhabit this layer because of the abundant food that is available there and because it is a constant, humid shade from hot sun.

Understorey Layer – this layer is a dark, cool environment that gets little sunlight and therefore has limited plant life. There are usually short, green, leafy shrubs, mostly non-flowering, small trees, ferns and vines. The Understorey is home to many insects and birds.

Forest Floor Layer – this layer is completely shaded except for small openings caused by fallen canopy trees. There is no grass on the forest floor as the soil is of poor quality, however, the forest floor is teeming with animal life particularly insects and arachnids, also larger animals such as jaguars, pumas, gorillas, anteaters and large snakes like the anaconda and the Boa Constrictor. Insects make up the largest single group of animals that live in tropical forests. The forest floor is also the most humid part of the Rainforest.

The three largest tropical rainforests in the world can be found in three major geographical areas around the world. They are situated in the Zaire basin in Africa, with smaller areas in West Africa and Eastern Madagascar, Asia and Central America where the Amazon River basin is found. Each one contains different species of animals and plants.

To find out about many animals, birds and insects that inhabit the tropical rainforest of the earth, visit our Rainforest section, here at Animal Corner.