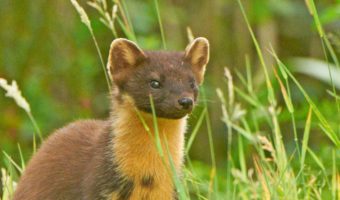 The Pine Marten (Martes martes) is an animal in the weasel family, native to Britain Northern Europe.

Pine martens are distributed throughout most of West Europe, with local pockets in the UK, Corsica, Sicily, Sardinia and the Balearic Islands. They also occur in Central Asia.

Found throughout Europe, in Britain they are primarily concentrated in the Scottish highlands and Grampians, with smaller populations in parts of northern England and Wales. Reintroduction in England and Wales has been advocated, however, further study of their habitat needs and the likely impact on other species is needed before a formal programme could be carried out.

The Pine Marten pre-breeding season population is estimated to be 3,300 (only 120 in England, 60 in Wales, rest in Scotland). 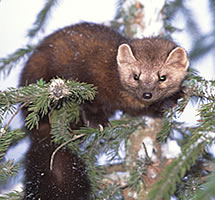 Pine Martens have light to dark brown fur and yellow/cream throat patches which can look like a ‘bib’. Their fur grows longer and silkier during the winter months.

Pine martens are the only mustelids with semi-retractable claws. This enables them to lead more arboreal lifestyles, such as climbing or running on tree branches, although they are also relatively quick runners on the ground. Pine Martens have small rounded, highly sensitive ears and sharp teeth for eating.

Pine martens have a varied diet with voles and mice forming the greater part. They also consume birds, eggs, beetles and other insects frogs, honey, fungi, carrion (dead animal carcasses) and berries (especially in the autumn).

Although agile enough to take squirrels, there is little evidence of them doing so in this country, although in Scandinavia this has been documented. The fox is both a predator of pine martens and a competitor for its food sources.

Pine martens are crepuscular which means they are mainly active at night and dusk. Pine Martens are territorial animals, they mark their range by depositing faeces in prominent locations. They have large territories of 5 – 15 kilometres squared for females and perhaps twice as much for males.

Pine martens reach sexual maturity at 2 or 3 years of age. The young are usually born in March or April after a one month gestation period in litters of 1 to 5. Young Pine martens weigh around 30 grams at birth. The young begin to emerge out of their dens by the middle of June and are fully independent around 6 months after their birth. The male Pine marten plays no part in rearing the young.

The Pine marten has lived to 18 years in captivity, however, in the wild a life span of 8 to 10 years is more typical.

Although they are preyed upon occasionally by golden eagles and even more rarely by red foxes, humans are the largest threat to Pine Martens. Martens are prized for their very fine fur and loss of habitat leading to fragmentation, persecution by gamekeepers, human disturbance, illegal poisoning and shooting have caused a considerable decline in the Pine Marten’s population. In the United Kingdom, Pine Martens and their dens are offered full protection under the Wildlife and Countryside Act (1981) and the Environmental Protection Act.