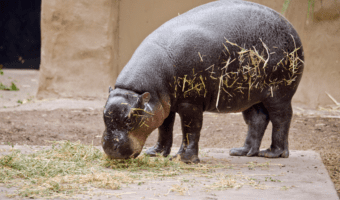 Pygmy hippos are quite rare and it seems that there were never many of them at one time in existence.

Although Pygmy hippos resemble their larger relatives, the Common Hippo, closer observation can define several differences. Pygmy hippos are relatively smaller and weigh between 350 – 550 pounds. They stand 2 and a half feet tall and measure 5 feet from head to tail. The pygmy hippo is reclusive and nocturnal. 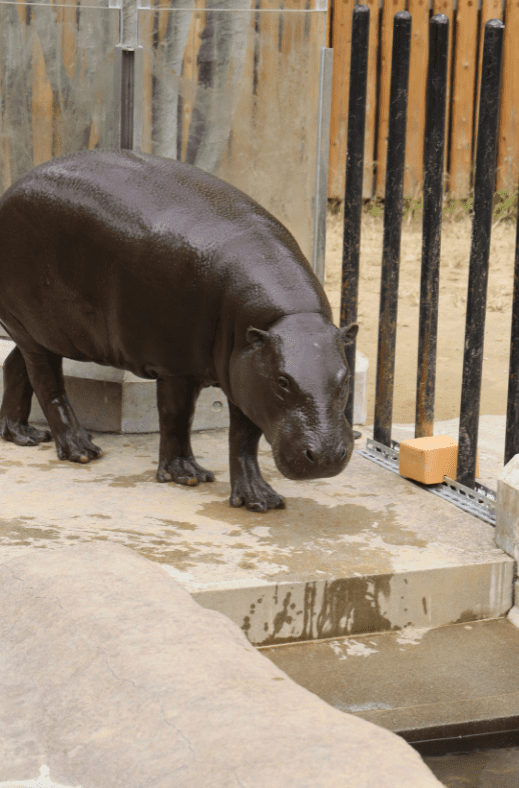 The pygmy hippopotamus displays many terrestrial adaptations, however, like its larger cousin, it is semi-aquatic and relies on to water to keep its skin moisturized and its body temperature cool. Behaviours such as mating and birth may occur in water or on land. Their skin is greenish-black, shading to a creamy grey on the lower body.

Pygmy hippos are good swimmers and have strong muscular valves that close off their ears and nostrils when they submerge into the water.

Whereas the Common Hippo produces a red fluid from their skin, the Pygmy Hippo secretes a white fluid which has the same effect of protecting their skins from the sun and infections.

Unlike the Common Hippo, the eyes on a Pygmy Hippo are placed on the sides of their heads and their nostrils are lower down on their muzzles. They have four toes on each foot that are more widely spread with less webbing than the Common Hippos, giving them more stability on land.

The pygmy hippopotamus is herbivorous, feeding on whatever ferns, broad-leaved plants, grasses and fruits it finds in the forests. Pygmy hippos usually begin feeding in the afternoon and continue until midnight. Pygmy Hippos also have multi-chambered stomachs that function like that of a ruminant (‘ruminant’ meaning a hoofed, sometimes horned animal that have more than one stomach and chew regurgitated, partially digested food). Like the Common Hippo, they do not chew their cud, they enjoy the advantages of rumination, but are classed a ‘pseudo-ruminants’ – (‘pseudo’ meaning – apparently similar or fake). 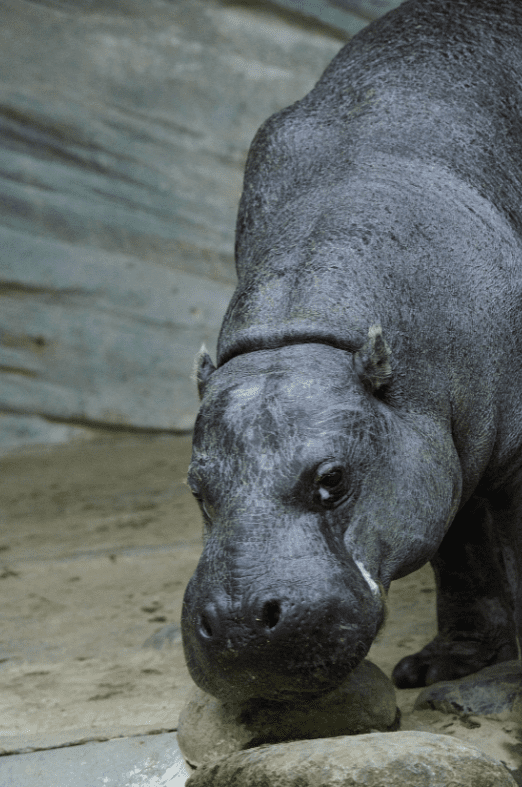 Like Common Hippos, Pygmy Hippos can be extremely aggressive. Although not territorial, they will still attack trespassers to their environment. Pygmy Hippos have sharp teeth and large canines and show them off with their large ‘yawn’ type posture to intimidate possible enemies if they feel threatened.

Occasionally, the males may fight over females in which they use the same techniques as the Common Hippo – using their teeth and jaws. When male and female Pygmy Hippos are found together, they are probably consorting (keeping each other company) before mating. This courtship is not found in Common Hippos.

Mating takes place in or out of the water. Mating age begins at about 3 years old in Pygmys. The Pygmy hippo female carries her baby for about 6 – 7 months and then gives birth to one single calf. The calve will weigh around 10 – 14 pounds. A Pygmy hippopotamuses life span is between 30 and 50 years. 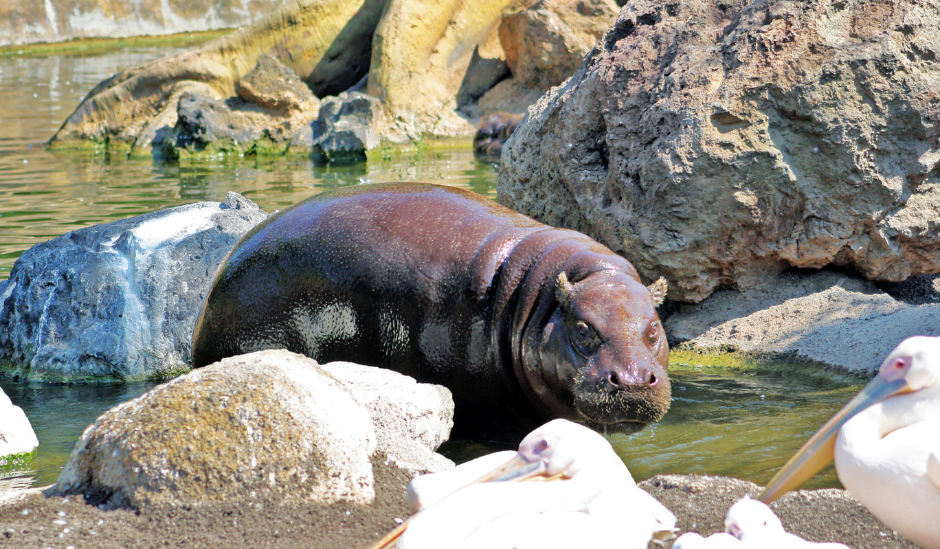 Pygmy Hippos are extremely rare in the wild – there is probably only a few thousand of them around. Their biggest threats are loss of forest habitat due to the timber industry and being hunted by man for meat and tusk.

A certain subspecies of the pygmy hippo is critically endangered. Although endangered in the wild, Pygmy Hippos breed in large numbers in zoos. In November 2003, there are 178 pygmy hippopotamuses in 74 collections around the world. Most, if not all, of these animals were born in zoos to zoo-born parents.