You are here: Home / Animals / Hippopotamus 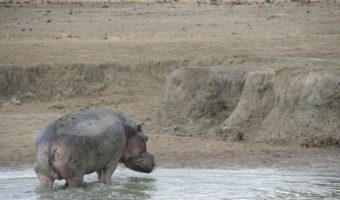 The hippopotamus is a large, mostly plant-eating African mammal, one of only two extant, and three or four recently extinct, species in the family ‘Hippopotamidae’.

The hippopotamus has an average life span of about 45 years in the wild and 50 years in captivity.

There are two species of hippopotamus –

Before the last Ice Age, the hippopotamus was wide spread in North Africa and Europe and could live in colder climates on the condition that the water did not freeze during winter. The hippopotamus is now extinct in Egypt, where it was a familiar animal of the Nile into historic times.

As many as 3 species of Malagasy Hippopotamus became extinct during the Holocene on Madagascar, one of them within the past 1,000 years.

The Malagasy Hippos were smaller than the modern hippopotamus, likely through the process of insular dwarfism (the process of the reduction in size of large animals, mostly mammals, when their gene pool is limited to a very small environment).

There is fossil evidence that many Malagasy Hippos were hunted by humans, a likely factor in their eventual extinction.

The hippopotamus is semi-aquatic mammal, inhabiting rivers and lakes in sub-Saharan Africa in large groups of up to 40 hippos. During the day they remain cool by staying in the water or mud; reproduction and childbirth both occur in water, where territorial bulls preside over a stretch of river.

Hippos emerge at dusk to graze on grass. While hippos rest near each other in territories in the water, grazing is a solitary activity and hippos are not territorial on land.

The eyes, ears and nostrils of hippopotamus are placed high on the roof of the skull. This allows them to be in the water with most of their body submerged in the waters and mud of tropical rivers to stay cool and prevent sunburn.

Hippopotamuses need water deep enough to cover them, within commuting distance of pasture. Hippos must submerge into the water because their thin, naked skin is vulnerable to overheating and dehydration. 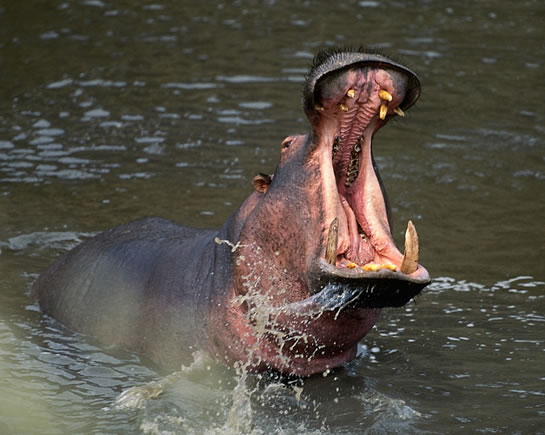 Hippos average 3.5 metres (11 feet) in length, 1.5 metres (5 feet) tall at the shoulder and weigh from 1500 kilograms to 3200 kilograms (3,300 to 7,000 pounds). Hippos are approximately the same size as the White Rhinoceros and experts often debate on which is the next largest land animal after the elephant. Male hippos appear to continue growing throughout their lives, whereas the female hippos reach a maximum weight at around the age of 25 years.

Female hippos are smaller than their male counterparts and normally weigh no more than 1500 kilograms. The value given above of 3200 kilogramsis often quoted as being the upper limit of weight for a male hippo.

However, larger specimens than this have been documented, including one hippopotamus which weighed about 10,000 pounds (4,500 kilograms) and measured around 16 feet (5 metres) in length.

Despite the hippos physical resemblance to pigs and other terrestrial even-toed ungulates, their closest living relatives are cetaceans including whales and porpoises.

Hippopotamuses have legs that are small, relative to other megafauna (groups of large animals), because the water in which they live reduces the weight burden. Like other aquatic mammals, the hippopotamus has very little hair.

Hippos are highly territorial mammals. A male hippo often marks his territory along a riverbank from which to draw in a harem of female hippos, while defending it against other male hippos. Male hippos challenge one another with threatening gapes. Their canine teeth are 50 centimetres (20 inches) long and they use their heads as battering rams, especially against rival males while fighting over territory.

Since their habitat is often encroached upon by farmers and tourists and because they are so territorial, the hippopotamus is the most dangerous animal in Africa. Hippopotamuses kill crocodiles and lions and are even responsible for more human deaths than any other African animal. The hippo does not hunt humans, however, it defends its own territory vigorously. Approach hippos with care, or do not approach them at all.