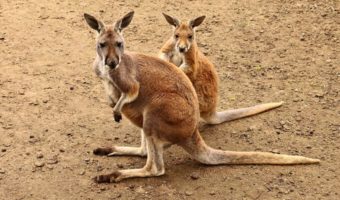 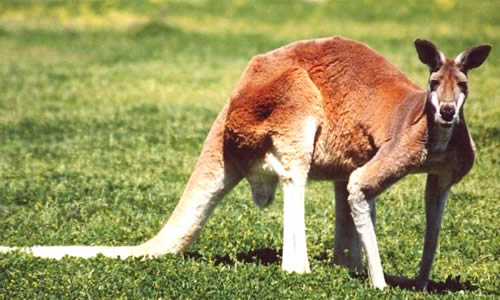 Red Kangaroos have very long tails which can measure 0.9 metres (3 feet) in length. Male red kangaroos have short, reddish brown fur with a more faded coloring below and on their limbs. They have a square shaped muzzle and long, pointed ears. Females are smaller than males and their coats are a pale grey color with a blue tinge, females are sometimes called ‘blue fliers’.

Females have a pocket of skin called a pouch on the lower part of their stomach to carry their young. Red kangaroos have short forelimbs with small claws on the end. Their hind limbs are long and muscular and used for jumping. Some jumps can travel up to 16 feet (5 metres) in one leap. Red kangaroos have strong tails that are sometimes used to create a tripod when standing upright.

The Red Kangaroo maintains its internal temperature at a point of homeostasis (about 36°C) using a variety of physical, physiological and behavioural adaptations. These include having an insulating layer of fur, being less active and staying in the shade when temperatures are high where it will pant, sweat and lick its forelimbs.

The Red Kangaroo inhabits most of the dry inland of the central part of Australia in small groups called mobs. It prefers open plains where trees and bushes are scarce.

Kangaroos are herbivores. The diet of the Red Kangaroo consists of grasses and other vegetation. Red kangaroos can survive long periods of time without water. Their thirst is satisfied by the moisture taking from the plants that they consume.

When male kangaroos fight over potential mates, they appear to be boxing. When fighting, male kangaroos balance on their strong tails, grab their rival with their forearms and kick with their powerful hind legs. They attempt to push their opponent off balance. Kangaroos can also bite and wield sharp claws, which they may do in battle with an enemy like a dingo.

Red kangaroos hop around at great speeds which can reach over 35 miles per hour (56 kilometres an hour). When grazing together they are always on the lookout for danger and will warn others in the group by stamping their feet. This is a sign for young joeys to hop back into their mother’s pouch for safety.

Red Kangaroos have no specific breeding season and breed all year round. The females have the unique ability to delay birth of their baby until their previous Joey has left the pouch. This is called ’embryonic diapause’. The gestation period is around 33 days. Females have one young at a time. The young are extremely small, about 2 centimetres, the size of a cherry. Joeys are born blind and have no fur. The joey will suckle on one of the females 4 teats continuously for the first 4 months of its life.

Once the joey has grown fur, it will leave the pouch on small exploring trips. As the joey grows, their heads and feet can be seen hanging out of the pouch. The young Joey will permanently leave the pouch at around 235 days old, but will continue to suckle until it reaches 12 months of age. The life span of the Red Kangaroo is 23 years in the wild.

Red Kangaroos are classed as ‘Least Concern’ by the IUCN. In Australia, the Red Kangaroos numbers have increased in numbers in response to the people. Sheep ranchers have converted woodlands to grasslands and provided permanent water sources and have also helped by fencing out and killing the dingo. However, many millions of kangaroos roam Australia, and considerable numbers are killed each year for their skins and meat, which is becoming a more popular human food.

At birth, a red kangaroo is no bigger than a human thumb, but a mature kangaroo can be taller than a man.