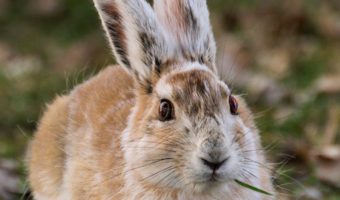 The Snowshoe Hare (Lepus americanus) is also called the ‘Varying Hare’. The snowshoe hare is found in alpine regions of North America, Alaska and Canada.

The population of the snowshoe hare fluctuates tremendously on a roughly 10 year cycle, due to the availability of food and predator interactions. 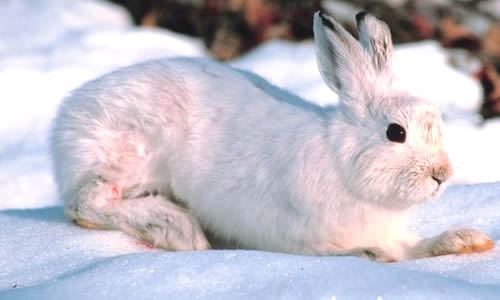 The snowshoe hare has a body length of 36 – 52 centimetres and a tail length of 2.5 – 5.5 centimetres. It is larger than other hares and weighs around 3 to 4 pounds as an adult. The snowshoe hare is appropriately named because it has very large back feet. It looks as if it is wearing large shoes made for walking in the snow. These large feet prevent the hare from sinking into the deep snow as it hops and walks, as the toes can spread out to act like snowshoes. Their feet also have fur on the bottom, which protects them from the cold and gives them traction in the snow.

During the winter, the snowshoe hares fur turns white in color to help it camouflage from predators. During summer, its fur turns a rusty/brown color. Throughout the year, however, its flanks remain white and there are distinguishable black tufts of fur on the edge of its ears.

The snowshoe hare lives in forest areas where the ground is covered with undergrowth, swamps and thickets.

Snowshoe hares are herbivores. Their diet consists of plants such as grass, ferns and leaves in the summer and twigs, buds and bark in the winter. The snowshoe hare either feeds alone or in small groups.

The snowshoe hare is nocturnal, mainly active at night and does not hibernate. The Snowshoe hare can run up to 27 miles per hour and jump 10 feet in one hop. It is an expert at escaping predators like the wolf, bobcat or lynx. When a predator chases it, the hare will quickly change direction. Snowshoe hares are also very good swimmers and will jump in the water to make an escape.

Breeding begins in March. A female snowshoe hare may have up to 4 litters per year which average 2 – 4 young which are born well furred, with their eyes open. During breeding season males will compete for females and females may breed with several males.

The Snowshoe hare is classed as ‘Least Concern’ by the IUCN.