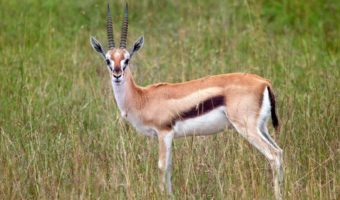 Thomson’s Gazelle The Thomson’s Gazelle is the smallest, daintiest and fastest of all gazelles. Sometimes referred to as ‘Tommy’, this gazelle was named after the Scottish explorer, Joseph Thomson who explored Africa in 1890. These graceful antelopes are still one of the most common gazelles in East Africa and although numbers may have declined in other parts of Africa, the Thomson’s Gazelle still thrives on farmland, grasslands and savannas in the East. 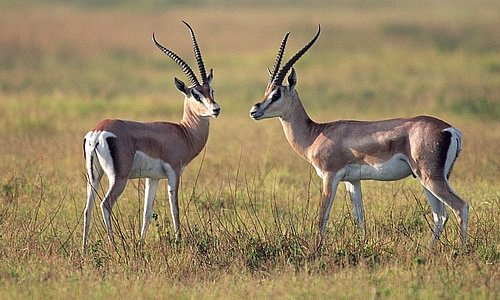 Thomson’s Gazelles are 70 – 90 centimetres in length and 60 – 90 centimetres tall. They weigh around 12 – 85 kilograms (26 – 187 pounds). Male Thomson’s Gazelles are slightly larger than females. These attractive gazelles have a light brown coat and white underparts. They can be distinguished from the Grant’s Gazelle by their dark stripe which extends across their flanks. Their rump is white which extends to just underneath their tale.

Thomson’s Gazelles have a thin black stripe on their face which runs down from the eye, a dark marking on their nose and a pale patch on their forehead. Males have long pointed horns which are marked with around 20 rings and are curved backwards with the tips curving forwards. Females have either no horns at all or small, short, slim horns.

Thomson’s Gazelles have slender legs and a short, black tail which is constantly in motion swinging back and forth like a window blade wiper. They have large ears and eyes and a narrow muzzle. Their heads are small and they have a lightweight body which enables them to run fast and make sharp turns. To make up for their vulnerability out on the plains, gazelles have an excellent sense of hearing which makes them exceptionally alert to sounds. They also have excellent smell and sight which is their main source of communicating with each other.

Thomson’s Gazelles are found on dry, grassy plains in Sudan, Tanzania and the serengeti areas of Kenya. They prefer grasslands and shrubby steppes with heavily grazed, trampled grass. The gazelles can remain on pastures long after larger herbivores have left. 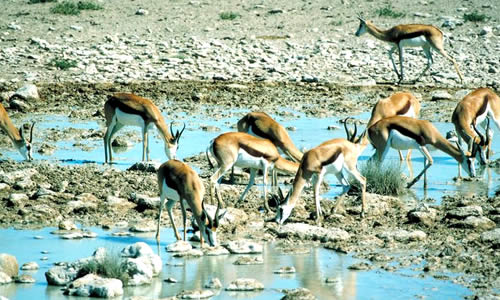 The gazelle is a main food item of many savanna predators such as lions, leopards, hyenas, hunting dogs and cheetahs. Thomson’s Gazelles are very fast animals and can sometimes outrun their predators. During their initial flight from their attackers, a gazelle may sprint at up to 80 kilometres per hour (50 miles per hour) for around 15 – 20 minutes. These impressive sprinters also run in special ways to communicate with the rest of their herd and confuse their pursuer. As the gazelles race along in their escape, they perform sudden bounding leaps in high arcs. This behaviour is called ‘pronking’ or ‘stotting’ and it makes it more difficult for the gazelle to be brought down by their predator.

When a gazelle spots a stalking predator, it will pronk or stott to alert other gazelles to the danger and can also startle their predator. Another possibility for this behaviour is that it demonstrates their fitness in hope that the predator will give up the chase or that the predator should not bother trying to chase the obviously agile gazelle.

Thomson’s Gazelles are social animals and live in herds of over 200 individuals. Thomson’s Gazelles sometimes congregate with other hoofed animals such as zebra and other species of antelope. During migration, thousands of gazelles will travel together in search of water during the dry season. Their territories may overlap with other species of ungulates with no problems. However, some may be more territorial and defend their territories vigorously if challenged. The defending male will clash horns with his opponent, the winner then claims the territory.

Thomson’s Gazelles mark the boundaries of their territory with a small secretion from scent glands located beneath their eyes. They deposit the secretion onto a blade of grass around 20 feet apart daily. 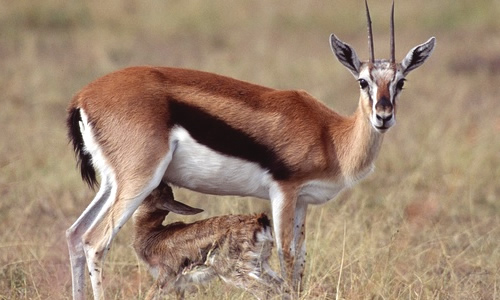 Female gazelles usually give birth after the rainy season to a single young, known as a Fawn, after a gestation period of 5 – 6 months. After giving birth, for the first 3 weeks the mother hides the fawn in tall grass and returns twice daily to nurse it until it is old enough to join the herd.

Fawns have a tawny coloring which helps them stay camouflaged when hiding in open country. They can also stay very still for long periods of time. Although adult gazelles can out run a lion or cheetah, almost half of all fawns will be lost to predators before reaching adulthood. Female Thomson’s Gazelles can give birth twice a year which is unusual for ungulates. The life span of a Thomson’s Gazelle is 10 – 15 years in the wild.

Although numbers in some areas of Africa have declined due to hunting and habitat loss, the Thomson’s Gazelle is not threatened and is classed as ‘Least Concern’ by the IUCN.

The name for the Thomson's Gazelle in Swahili is 'Swala Tomi'.The Name 'Gazelle' comes from the Arabic word 'ghazal