You are here: Home / Animals / Bison 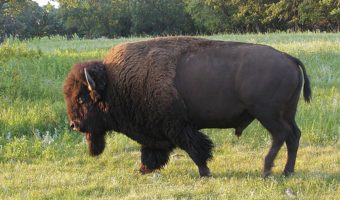 Altogether, there were originally 6 species of Bison, however, 4 are now extinct.

Male Bison are referred to as ‘Bulls’ and females are referred to as ‘Cows’. American Bison and European Bison are very similar in appearance. Bison are huge, powerful, aggressive bovine mammals with solid muscular heads and necks which are covered with brown shaggy fur. They use their very strong heads to shove and head-butt each other to win females during breeding season.

Both males and females have sharp, curved horns extending from the sides of their heads which are used to defend themselves against predators. Bison have humped shoulders and short legs. Their tails are long and have a furry tuft at the end. Bison measure between 2.1 and 3.5 metres (7 – 11 feet) in length and weigh between 350 – 1,000 kilograms (770 – 2,200 pounds). They stand around 2 metres (6.6 feet) tall. Males are slightly larger than females which is typical in ungulates.

During the winter months, they have a dark brown thick coat which is shed and turns lighter brown in the summer months. European Bison are slightly less shaggy than their American relatives, however, they are more powerfully built. Bison have quite poor eyesight, however, their hearing and sense of smell is very good. They are able to detect another animal by smell at a distance of 3 kilometres.

Bison are herbivores and move around grasslands feeding on leaves, twigs, bark, berries and a wide variety of grasses and rushes. Their favourite plants include willow, aspen, ash, mistletoe and blackberry. They also eat mushrooms, ferns, lichens, mosses and acorns. Bison do not have a problem finding food during the winter as they swing their huge heads from side to side to disperse snow and find food.

Mature bulls move in separate herds from the cows and their young. They join during the late summer which is their breeding season. Bulls will compete with each other for females by ramming and butting each other. A bull with its head lowered is a menacing spectacle.

Bison often rub their shoulders and rumps against boulders and tree trunks and also enjoy taking mud and dust baths in shallow wet or dry depressions in the soil called ‘wallows’. This wallowing behaviour helps them to scratch off fly larvae and other parasites that live on their hides.

Bison can run very fast despite their huge size and can reach speeds of up to 55 kilometres per hour. They are also excellent swimmers but are very buoyant and their heads, humps and tails stay above the waters surface. Bison rest during the day and do their grazing during the night and at dusk.

The main predators of Bison are Wolves and sometimes Grizzly Bears. Bison display various defence behaviours, particularly bulls, when protecting cows and calves. Cows and calves are always at the front of a fleeing herd and the bulls remain at the rear to guard them.

Bison breeding season occurs in late summer around August and September. Bison are polygamous (a mating structure in which a single individual of one gender has exclusive access to several individuals of the opposite gender).

Dominant bulls maintain a small harem of females for mating. Following mating, the bull guards the female for several days to prevent other rival bulls from mating with her. After a gestation period of around 9 months, a single calf is born in the springtime. Births occur every 1 – 2 years. Females and their young herd together to form ‘playgroups’ where calves socialise with each other.

At around 2 months, calves begin to develop their distinctive shoulders, humps and horns which are used in playfights. The playfights allow them to develop their skills that ultimately serve in the ruts adult males undertake during breeding season. Young bison are lighter in color for their first 3 months of life.

Young Bison are nursed for around one year. Very rarely, a calf may turn entirely white. White Bison are considered sacred by many Native Americans. Bison are sexually mature at the age of 1 – 2 years. The life span of a bison is 20 years in the wild and 40 years in captivity.

Bison are a near endangered species. Both the American and the European Bison were once in abundance, forming herds of over 2,000 individuals in their native habitats. However, American Bison were saved from extinction as they were almost wiped out completely by hunters in the 19th century as grasslands were cleared to make way for agriculture.

European Bison are even more rarer than their American relatives. European Bison disappeared from Western Europe by the late middle ages and became extinct in Eastern Germany by the 18th century. Their main decline was due to loss of habitat and an increase in hunting as human populations increased across Northern Europe.