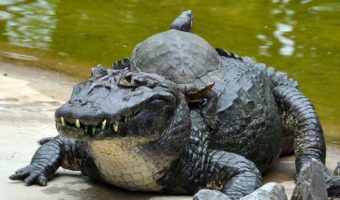 The Cuviers Dwarf Caiman prefers freshwater forested riverines (drainages between and including the Amazon and Orinoco rivers, in addition to those in Paraguay) and flooded forests around larger lakes.

This Caiman also inhabits rivers and small streams in Bolivia (exposed shoreline and around dead wood). Although Cuviers Dwarf Caiman generally prefers clean, faster-flowing stretches of river, it does occur in very nutrient-poor waters in southeastern Brazil and Venezuela. 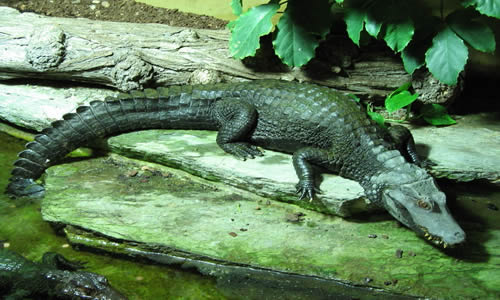 The armour reduces injury in more fast-flowing riverine habitats, as well as from obstacles and predators during terrestrial forays which are common in the adults.

The Cuviers Dwarf Caiman has one of the most remarkable head shapes of any crocodilian, being short, very smooth and concave (high skull, upturned snout), with a pronounced overlapping of the lower jaw by the upper.

The short, backward-curved teeth are particularly suited to taking invertebrates such as crustaceans. Prey also varies depending upon its availability.

The Cuviers Dwarf Caiman may be found singly or in pairs for most of the year, although no set breeding season has been discovered. Females are mound-nesters, using available vegetation and mud. The mound is usually built under cover, and in a concealed position. Size of the clutch is reported to range from from 10 to 25 eggs and the incubation period lasts around 90 days. Although it has been noted that adults will open the nest and move the juveniles to the water, information on parental care following hatching is lacking and implies that there may be none.

Juveniles are brown in color with blank banding. Adults are darker. The Juveniles head is chocolate brown, with an iris color to match. Their lower jaw is flecked with white bands.

Newly hatched young may not enter the water until the end of their first day. Until then, they are coated with a slowly-drying, protective mucus layer. Although such a covering is present in the hatchlings of all crocodilians, it has been suggested that the drying of the layer may help to reduce the growth of algae on the body of this species.

Threats come from habitat destruction and pollution (for example, through gold mining activities). Although legal subsistence hunting and collection for the pet trade (commercially in Guyana) reduce crocodile densities in local areas of some countries, there is no evidence that the populations have been significantly depleted in those areas.

Extensive survey data are available for this species, usually collected during surveys of other crocodilian species. The data shows that the Cuviers Dwarf Caiman is widespread and relatively stable. There is little incentive for commercial exploitation, such as sustainable-yield management. Improvements in tanning technology and decreasing populations of more suitable species may result in greater levels of exploitation. Despite the information regarding population status, little is known about the biology and ecology of the Cuviers Dwarf Caiman and further research is required in this area.