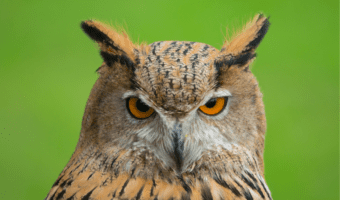 The Eurasian eagle owl (Bubo bubo), sometimes abbreviated to just the “eagle-owl” in Europe, is a species of eagle owl that resides in much of Eurasia. It is one of the largest species of owl, and females can grow to a total length of 75 cm (30 in), with a wingspan of 188 cm (6 ft 2 in). Males are usually smaller. These birds are recognized by their ear tufts and mottled upper parts.

Eurasian eagle owls are found in many habitats, but are mostly found in mountainous regions and rocky regions, especially in areas that are relatively remote. They reside near varied woodland edge and shrubby areas with openings or wetlands to hunt the majority of their prey, but can also be found near farmland or park-like settings in cities occasionally.

They are known for their power and aggressiveness, and have excellent hearing and night vision for hunting. They are able to attack and defeat even the large Peregrine Falcons, and they can overpower most birds of prey.

This owl is not only one of the largest species of owl, but it is also one of the most widely distributed. The population of Eurasian eagle owl is estimated to be between 250,000 and 2.5 million. It is listed as Least Concern by the IUCN Red List.

As there are 13 different subspecies of eagle-owl, it is not surprising that the plumage coloration across these subspecies highly variable. The upper parts may be brown-black to tawny-buff to pale creamy gray. They usually have freckling on the forehead and crown, stripes on the nape, sides, and back of the neck, and dark splotches on the pale ground color of the back, mantle, and scapulars. The outer portion of their flat, greyish facial disc is framed with black-brown spotting.

Their bodies are bulky and barrel-shaped, which is one of the main features that distinguishes these owls from others. Their erect ear tufts are another feature that make them stand out.

Their bill and the claws are black, and their legs and toes are fully feathered buffy-white. The color of their eyes ranges between an orange-yellow to a deep orange, depending on the species.

Besides the female being larger, little external sexual dimorphism is seen in the Eurasian eagle-owl, although the ear tufts of males reportedly tend to be more upright than those of females. In some populations, the female typically may be slightly darker than the male.

The first moult of an eagle-owl starts the year after hatching with some body feathers and wing coverts being replaced. The next year, the three central secondaries on each wing and three middle tail feathers are shed and regrown, and the following year, two or three primaries and their coverts are lost.

In the final year of the post-juvenile moult, the remaining primaries are moulted and all the juvenile feathers will have been replaced. Another moult takes place during years 6-12 of the bird’s life, which takes place each year between July and December.

In the wild, the eagle owl can live for around 20 years, but captive birds can live up to 60 years. Because of their size and nocturnal habits, adult eagle-owls have very few natural predators and early death is usually caused by electrocution, traffic accidents and shooting.

Eurasian eagle-owls are carnivores and mainly feed on small to medium-sized mammals weighing between 0.4 and 4.4 lbs (200 and 2,000 g). They favor animals such as rabbits, hares, voles, rats and mice, but they will also take prey up to the size of foxes and even young deer up to 37 lbs (17 kg) . They also hunt other birds (including smaller owls), up to the size of herons and other birds of prey, such as buzzards. They may also eat amphibians, reptiles (including snakes), fish and insects.

Hunting usually takes place at dusk and dawn and mainly consists of the owl watching from a perch for prey activity and then swooping down swiftly once prey is spotted. Their prey usually has no idea they were being stalked. Occasionally, they may capture other birds on the wing, and they may even plunge into water to catch fish.

The prey is often killed quickly by the eagle owl’s powerful grip and talons though is sometimes bitten on the head to be killed as well. Then the prey item is swallowed whole or torn into pieces with the bill. Most prey, even up to the size of small rabbits, are swallowed whole.

Most hunting occurs in wood-cloaked openings, often those carved out by wetlands or watersheds. While they can hunt within woodlands, the eagle owl finds this more difficult as they rely more on their sight rather than hearing for hunting. They often use tree branches, rock formations, rubble with large rocks, hills with tall grasses or even a building as a hunting perch.

Eagle owls are primarily solitary animals except during the mating period. Despite their large size, these animals are elusive and have been hard to study in their natural habitats. They are nocturnal, becoming active and dusk and remaining active throughout the night. During the day, they roost in high up trees, but if food is scarce they will hunt during this time.

They’ll fiercely defend their territory against other owls and will only overlap territories slightly if food is sparse. They prefer to stay within the same territory unless they are forced to leave due to food shortages or if they are driven out by other owls.

They are a non migratory bird, and even those that live in the coldest climates that may suffer food shortages in the winter will not leave their native range.

The Eurasian eagle owl is a broad-winged species and engages in a strong, direct flight, usually consisting of shallow wing beats and long, surprisingly fast glides. 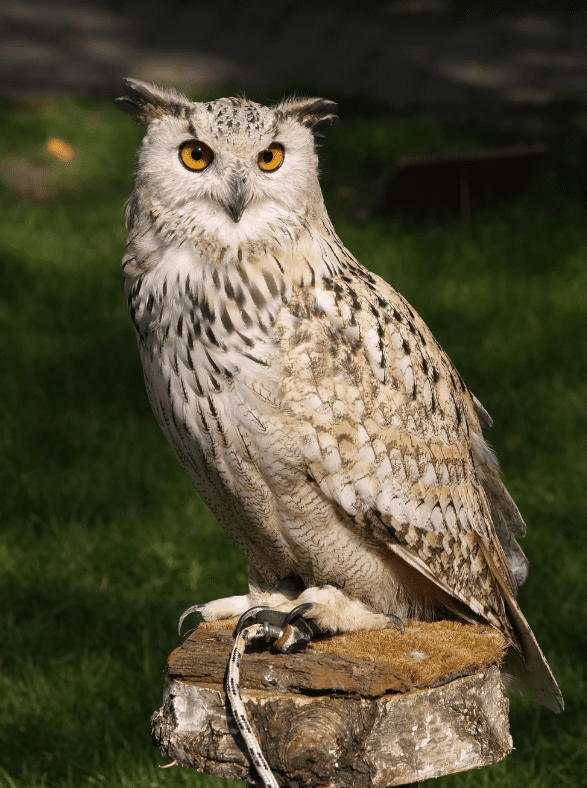 The Eurasian eagle-owl uses loud calls to communicate, and are often heard more than they are seen. They use a variety of hoots and clucks, with different noises having different meanings.

The different members of a group can be identified by their different vocalizations, too.

During the breeding season, the females sometimes make a coarse “kraaah” sound. The young also make this sound. Eagle-owls are also able to decipher the size and distance of intruders based on the intensity of their call.

In January and February, the primary function for vocalization becomes for the purpose of courtship. While these birds are territorial all year round, territorial calling appears to peak around October to early January.

When calling for the purposes of courtship, males tend to bow and hoot loudly. Courtship in the Eurasian eagle-owl may involve bouts of “duetting”, with the male sitting upright and the female bowing as she calls.

Eurasian eagle-owls typically breed from the end of February to the end of April. They are considered to be monogamous, but some cases of bigamy have been recorded.

The male selects breeding sites and advertises their potential to the female by flying to them and kneading out a small depression (if soil is present) and making staccato notes and clucking noises.

Several potential sites may be presented, with the female selecting one. They usually nest on cliff ledges, in cracks and crevices between rocks and in caves and may re-use the same nest site over several years.

The female alone incubates these eggs alone for 31 to 36 days, while the male feeds the female. Once the eggs are hatched, the male eagle-owl continues to hunt until the young are 4 to 5 weeks old and the female spends all her time brooding at the nest.

The nestlings leave the nest when they are about 5 weeks old and take their first flight 2 to 3 weeks later. They remain dependent on the parents for another 3 to 4 months. Juveniles have rudimentary ear-tufts, a narrowly barred under plumage and a buffy down on the head.

At about seven to eight weeks, the owlets are ready to fly, but still require food from the parents for several weeks after that. The Eurasian eagle-owl reaches sexual maturity when they are about 1 year old, but usually don’t breed until they are 2 to 3 years old. Eagle-owls are able to breed from the ages of 2 to 31 years.

The Eurasian eagle-owl is one of the most widely distributed of all owl species, although it is far less wide-ranging than the barn owl. The vast majority of eagle-owls live in Continental Europe, including Spain, Portugal, France, Luxembourg, Belgium, the Netherlands, Germany, Switzerland, Italy, Austria and Greece. It is also found in Scandinavia, Russia (which is almost certainly where the peak numbers and diversity of race occurs), and Central Asia.

Additional minor populations exist in Anatolia, the northern Middle East, the montane upper part of South Asia and in China; in addition, an estimated 12 to 40 pairs are thought to reside in the United Kingdom as of 2016 (where they are arguably non-native), a number which may be on the rise.

These adaptable owls inhabit areas with many rocks, cliffs, ravines and open spaces with scattered trees, coniferous forests, deserts and semi-deserts; as well as taiga, wooded steppe and farmland with suitable rocky areas. In fact, they have been found living in almost every climatic and environmental condition on the Eurasian continent, excluding the greatest extremities.

They are often found in the largest numbers in areas where cliffs and ravines are surrounded by a scattering of trees and bushes, as well as wetland areas as these often house small prey, such as voles and rabbits.

In recent history, they have also moved into urban habitats, breeding in quarries and buildings. Although found in the largest numbers in areas sparsely populated by humans, they have been seen in farmland areas, as well as park-like settings in Europe. They can be found at elevations of up to about 6,500 feet (2,000 meters) in Europe and 14,700 feet (4,500 meters) in Central Asia and the Himalayas. However, they can also be found at sea level.

Territories are established by the male eagle owl, who selected the highest points in the territory from which to sing. Territory size is similar or occasionally slightly greater than great horned owl: averaging 15 to 80 km2 (5.8 to 30.9 sq mi). 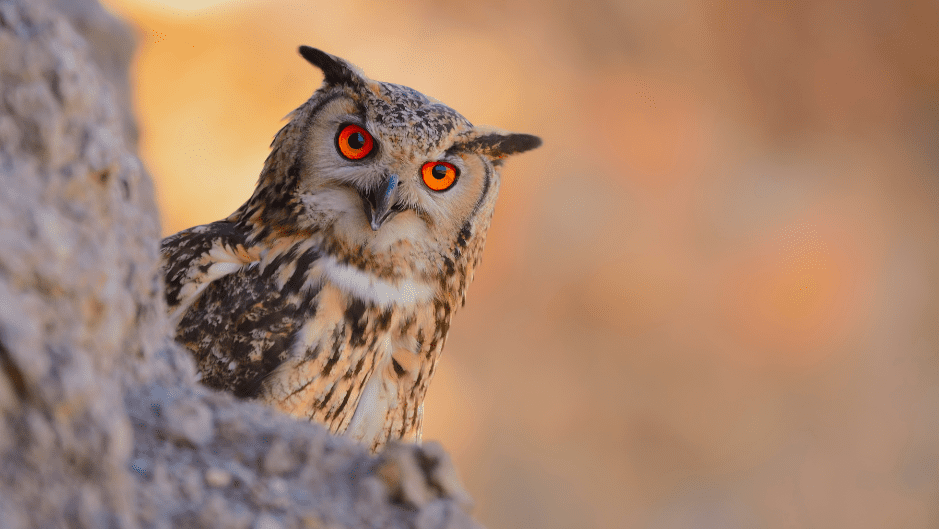 Despite the fact that the eagle-owl population is thought to be decreasing because of human activities, the International Union for Conservation of Nature has rated the bird as being of “least concern”.

Eagle owls are economically beneficial to farmers that want to keep the number of rodents down on their land, and removal of them from the ecosystem would mean we would be overrun with rats and other pests!

One the Eurasian eagle-owl reaches adulthood, they are at the top of the food chain in their niche and are at a very low risk of predation. Healthy adults normally have no natural predators, thus are considered apex predators. The leading cause of death for the eagle-owl is electrocution, traffic accidents and shooting.

They are most at risk during their early years, where they are at risk from any predator too large for them to eat. Fortunately, the mother stays with the young for most of this period and keeps the predators at bay. Due to their striped, spotted, and varied coloring, they are extremely well camouflaged, especially when perching in the trees.

Check out more animals that begin with the letter E