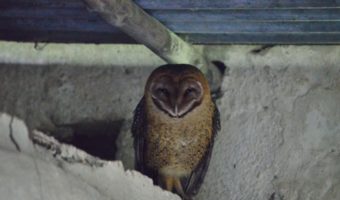 The Galapagos Barn Owl lives on the islands of Santa Cruz, Isabela, San Cristóbal and Fernandina although it is said that it is now extinct on the island of Floreana because of the introduction of mammals such as cats. Like its cousin, the Short-eared Owl, it is almost entirely nocturnal, and rarely seen. One important thing to understand about the Barn Owl is that they fall into a whole separate classification of owl, different from any other type.

The Galapagos Barn Owl has a heart-shaped facial disc and large, dark eyes. The facial disc is used to collect sounds from below and bring them to the ears, like a satellite dish. 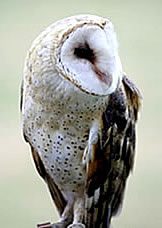 In appearance, the Barn Owl is medium sized, white, with a whitish underside. The heart-shaped face is also white with a brownish edge which distinguishes the shape of the heart. Their back is a tawny color and is marked with black and white spots. Barn Owls have long legs and very dark eyes. Their heads are round and do not have the ‘tufty’ ears that you may see on other Owls. There are 46 different races of Barn Owl – the smallest of them resident on the Galapagos Islands.

The Barn Owl is one of the few bird species where the female of the species is more ‘showier’ than the male. The female has a more reddish chest that is more heavily spotted. The spots may signal to a potential mate the quality of the female. Heavily spotted females get fewer parasitic flies and may be more resistant to parasites and diseases.

The Barn Owl has excellent low-light vision, and can easily find prey at night by sight. But its ability to locate prey by sound alone is the best of any animal that has ever been tested. It can catch mice in complete darkness, or hidden by vegetation or snow. Their normal attack method is to hover over fields of grass, very low, while listening for the movements of rodents below. Each one of their ears can hear a different range of tones, and with this the owl is able to ‘Triangulate’ the exact location of the rodent below, without ever seeing it! Since each ear is located, on the head, at different locations, the barn owl can receive sounds in its brain at different times.

Galapagos Barn Owls roost and nest on ledges inside collapsed lava tubes. Although rodents are their preferred prey, these opportunistic predators also prey upon reptiles and other birds. Barn Owls swallow their prey whole or in large chunks. They digest the soft tissues and regurgitate the indigestible parts of the prey such as scales, bones, feathers, and fur as walnut-sized pellets. In time, only the bones and skulls remain, and eventually they become fossils. Barn Owls typically regurgitate pellets close to their nests and roosting places.

Barn Owls are nocturnal animals although it is not uncommon to see this species emerge at dusk or be active at dawn, occasionally being seen in flight during full daylight. Flight is noiseless, with wing beats interrupted by gliding.

Barn Owls will breed any time during the year, depending on food supply. In a good year, a pair may breed twice. They will also nest in old buildings, caves and well shafts. The female will lay 3 to 6 eggs (occasionally up to 12) at 2 day intervals. The eggs are 38 to 46 millimetres (1.5 – 1.8 inches) long and 30 to 35 millimetres (1.2 – 1.4 inches) wide and will be incubated for 30 to 34 days. Chicks are covered in white down and brooded for about 2 weeks, and are fledged in 50 to 55 days. After this, they will remain in the vicinity for a week or so to learn hunting skills and then rapidly disperse from the nest area. Young birds are able to breed at about 10 months.

Barn Owls are short-lived birds. Most die in their first year of life, with the average life expectancy being 1 to 2 years in the wild.

Contrary to the normal ‘owl hooting sound’ from the ‘Strigidae’ family (Pronounced Strig-e-dee and which means ‘typical owls’, or ‘true owls’), the Galapagos Barn Owl has a distinctive call which sounds like a drawn-out, hissing scream.

These are the two most common sounds, but there are actually 17 different and distinct Barn Owl vocalizations each with a different communication purpose.