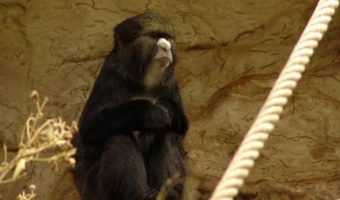 The Dryas Monkey (Cercopithecus dryas), also known as Salonga Monkey or Ntolu, is a little-known species of guenon found only in the Congo Basin, restricted to the left bank of the Congo River.

The Dryas Monkey has now been established that the animals previously classified as Cercopithecus salongo (common name Zaire Diana Monkey) were in fact Dryas Monkeys.

Some older sources treat the Dryas Monkey as a subspecies of the Diana Monkey and classify it as Cercopithecus diana dryas, however, it is geographically isolated from any known Diana Monkey population.

The Dryas Monkey is a fairly typical forest guenon. Body size varies from 40 – 55 centimetres, with a tail length of 50 – 75 centimetres. Adult Dryas Monkeys weigh between 4 and 7 kilograms, with marked sexual dimorphism. Its markings are similar to those of the Diana Monkey, except that its lower back and forelimbs are greenish-grey in color. Group sizes range up to 30 individuals, with only a single adult male.

The Dryas Monkeys move through the forest quadruped (mode of locomotion in which the animal moves along the horizontal branches with a regular gait pattern involving all four limbs).

The dryas monkeys preferred habitat is believed to be secondary forest or the upper story of primeval forest. Dryas monkeys feed mainly on plant materials, primarily fruit, flowers and young leaves, though they will also take some invertebrates. Gestation period is 5 months, with normally a single infant being born. Sexual maturity is reached after 3 years. In captivity, a life span of up to 19 years has been recorded.

Staring: This display by the dryas monkey is used as a threat display. The eyes are fixed on the stimulus and the eyebrows are raised and the scalp is retracted, the facial skin is also stretched by moving the ears back. Underneath the eye lids the color is different which contrasts sharply with the surrounding facial color.

Staring with open mouth: This is the stare accompanied by the mouth being open but the teeth are covered. This is a threat expression and often occurs with head-bobbing.

Head-bobbing: This is used as a threat display by the dryas monkey and head bobs up and down. This often occurs with staring with open mouth.

Presenting: This behaviour is preformed by the female to elicit copulation from the male. This pattern tells the male that she is ready to mate.

The Diana Monkey (Cercopithecus diana) is often considered one of the most beautiful of the Old World monkeys. The Diana monkey is found in West Africa, from Sierra Leone to Ghana. The Diana monkey inhabits the primeval forests, but does not thrive in secondary forests.

The Diana Monkey is active during the day. It rarely comes down to the ground, but feeds at all levels of the canopy, retreating to the upper levels of the trees at night, though it does not make nests.

The Diana Monkey ranges from 40 to 55 centimetres in length, excluding its tail, which is 3 – 4 centimetres in diameter and 50 – 75 centimetres long. Diana Monkeys are generally black or dark grey, they have a white throat, crescent-shaped brow band, ruff and beard. The brow band gives the species its common name, since it was held to resemble the bow of the goddess Diana. The Diana Monkeys underarms are also white and they have a white stripe down their thighs, while the backs of their thighs and their lower backs are a chestnut color. Apart from the brow band, ruff and bear, and some fringes on their limbs, their fur is short and sleek in appearance. Adults weigh between 4 and 7 kilograms.

Diana monkeys usually live in small groups. The size of the group may reach 30. There is usually only one adult male, two or three adult females and up to eight young. The male Diana monkey will not tolerate another adult male and warns them off with a head bobbing signal. When not resting during the hot noon hours, the group moves along calmly. A groups territory may encompass 0.19 to 0.38 square miles. Feeding and grooming is done in the safety of the middle to the high canopy of forests.

Diana monkeys have marked coloration which allows a wide range of visual social signals and they also have a wide range of alarm calls, with different sounds for different predators. Diana monkeys emit different grunts and low croaks, but the cry of the Diana has been described as yowling. They also communicate with facial expressions and head movements.

Diana monkeys feed mainly on fruit and insects, however, they will also take flowers, young leaves and invertebrates. Diana monkeys can pack their cheek pouches with the equivalent of about a stomachs load of food. This allows these monkeys to load up on food in places of danger or competition, then move on to a more secure location to eat. If the cheek pouches are full, the back of the hand is used to push food to the rear of the pouch. Food is very carefully processed (peeled, etc.) by hand and mouth to increase the quality and digestibility in the items swallowed.

In good conditions, adult females reproduce yearly. Gestation lasts about 5 months and the young nurse from their mother for a further 6 months. Only a single infant is born. Although the young are born in a fairly well developed condition, with open eyes and able to grasp their mother. Diana Monkey mothers appear anxious and possessive, rarely letting young infants leave them. As infants grow, however, they become very playful. Juveniles reach sexual maturity at an age of about 3 years. Daughters remain in their mothers social groups, while males leave their natal groups shortly before attaining sexual maturity. Diana monkeys may live for up to 20 years in the wild. Their life span in captivity is 22 years.

The Diana monkey is regarded as endangered by the IUCN as well as by the United States Fish and Wildlife Service. The main dangers to them are habitat destruction (they are now virtually confined to coastal areas) and hunting for bush meat. Forest tribes hunt them for food and professional hunters hunt them to sell in local markets, threatening their continued existence. Deforestation for farming has been the biggest factor in declining numbers. Diana monkeys are preyed upon by Crowned Hawk-eagles, leopards, chimpanzees and humans.

The Roloway monkey (Cercopithecus roloway) is one of the three most endangered monkeys of Ghana on the west coast of Africa. Roloway monkeys are an arboreal species found primarily in undisturbed, mature forests. Sadly, they do not appear to be very adaptable to changes in their habitat making them particularly vulnerable to human activity.

The average size of an adult male Roloway monkey is around 5 kilograms and for females, 4 kilograms. Their facial hair color is black, however, they have a white beard. Orange coloring can be found on the inside of their back legs.

Like all monkeys, Roloway monkeys communicate vocally. Their calls are used to alert the group to a predator or another monkey troop. It is a warning signal of danger. Males may also call to bring the troop back together if they have moved too far apart. Roloway monkeys also communicate visually. They stare when they are threatening another monkey or enemy. When they do this they also raise their eyebrows which pushes their scalp backwards, showing off the bright white fur on their brow line. Sometimes they also stare with their mouths open but not showing their teeth. This is also a threatening stance. Other times they also bob their heads while staring.

Roloway monkeys are frugivore-insectivores meaning that they eat mainly fruit and insects. They also eat leaves and seeds.

Roloway monkeys give birth to one offspring at a time after a gestation period of 5 – 6 months. The life span of the Roloway monkey is 20 – 30 years in captivity, it is unsure how long they live in the wild, but it would be rather shorter.

Greater Spot-Nosed monkeys (Cercopithecus nictitans) are the smallest monkeys from the Old World group of primates. At least 3 different guenon species have spots on their noses, the Greater Spot-nosed, Lesser Spot-nosed and the Red-tailed guenon.

Greater Spot-Nosed Monkeys head and body length is 320 – 450 miilimetres and tail length is 360 – 525 millimetres. Males weigh about 1250 grams and females about 760 grams. Their fur is a greenish grey or black to greenish yellow or buff. Their under parts are white or greyish white.

Greater Spot-Nosed monkeys have faces that are bare except for a few black hairs on the upper lip which is sometimes yellow. Their cheeks have yellow fur tipped with black and there is a black line which extends from the eye half the distance to the ear. Their eyes are black and are surrounded by yellow or orange skin.

The fur at the top of the head is black and they have a mane of white which extends across the neck and chest from the base of one ear to the other. The outer limbs are a pale yellow tinged with red and the hands and feet are similarly colored. The tail is greyish brown or black above and yellowish bellow with a blackish tip. Variations among individuals are from an overall olive to a true green tint. The main diet of the Greater Spot-Nosed monkey consists of fruits and insects.

Greater Spot-Nosed monkeys are apparently non-territorial, with adult males acting as leaders during the day and as guards at night. Adult females out number adult males. They live in small troops of 10 to 40 individuals dominated by a single male.

Females are more territorial than males and they are the only permanent members of the group. Greater Spot-Nosed monkeys are not as social as some of the other primates and any grooming or socializing is usually seen between a mother and her infant. Males and females rarely interact unless it is breeding season.

The gestation period of a female Greater Spot-Nosed monkey is between 158 – 166 days. Infants weigh around 230 grams at birth. Sexual maturity is reached at age 4.5 in females and about 1 – 2 years later in males. First births have been known to happen as early as the third year and as late as the seventh year.

Births occur every 1 to 3 years and infants nurse from their mothers for around 6 months, however, they may begin eating solids at 2 months of age. There is a dominant male in these groups of monkey, however, that does not mean that he has fathered any of the infants in the group. During the breeding season, solitary males or males from other groups will infiltrate the group and mate with the females. The life span of the Greater Spot-Nosed monkey is 20 – 25 years.