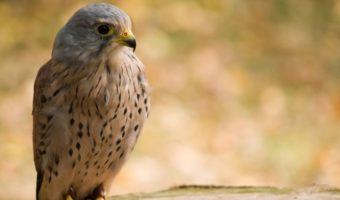 The Kestrel (Falco tinnunculus) is also known as the European Kestrel, Eurasian Kestrel or Old World Kestrel. In Britain, where no other brown falcon occurs, it is generally just called ‘the Kestrel’. The Kestrel is one of the most common birds of prey found in Britain. The population of breeding pairs in Britain is around 38,600. 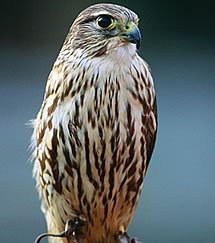 Kestrels measure 34 – 38 centimetres (13 – 15 inches) from head to tail, with a wingspan of 70 – 80 centimetres (27 – 31 inches). The average adult male weighs around 155 grams (5.5 ounces) with the adult female weighing around 184 grams (6.5 ounces). Female kestrels are slightly larger than male kestrels. The Kestrel is a small, chestnut brown bird of prey. Their hooked bill is a bluish color with yellow cere. Their legs are yellow.

The male (or tercel) Kestrel has black-spotted chestnut brown upperparts and a blue-grey head and tail. Their tail has a single black bar at the tip. Underneath, the breast and belly are buff colored with black spots. The female kestrel (or falcon) is darker than the male and their back, mantle and wings all have black barring. Their tail has black barring along its length. The creamy underparts are more heavily streaked in black than the male. Occasionally, their head and tail may be tinged with grey. Juvenile kestrels are similar in appearance to the female kestrels.

Kestrels are similar in size to the Sparrow hawk, however, kestrels have more pointed wings. They are not fast or powerful fliers and their wing beat is rather ‘flappy’.

Kestrels are found in a wide variety of habitats, from moor and heath, to farmland and urban areas. The only places they do not favour are dense forests, vast treeless wetlands and mountains. They are a familiar sight, hovering beside a motorway or other main road. They can often be seen perched on a high tree branch or on a telephone post or wire, on the look out for prey.

Kestrels nest in holes in trees or on a ledge on cliffs or buildings and simply line the hole or ledge with sticks and straw. Kestrels do not build their own nests, but use nests built by other species.

Kestrels feed mainly on small mammals, such as voles, shrews, mice and birds as large as Starlings. However, kestrels are adaptable birds and will switch to invertebrates such as beetles, earthworms, grasshoppers or even snails. In gardens, they will take meat scraps. 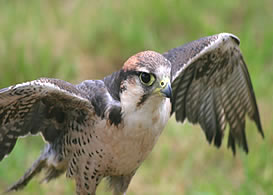 Kestrels can be easily identified by their hunting behaviour, hovering low over grassland in search of prey. Kestrels have keen eyesight enabling them to spot small prey from a distance. They are able to hover at a height of around 10 – 20 metres over open countryside.

Kestrels hover effortlessly for long periods of time by flying into a light headwind and making continuous small adjustments to its wings and tail while it hangs on an rising draught of air.

While hovering, the Kestrels head is kept perfectly still giving it the ability to spot the slightest movements on the ground. When suitable prey is in sight, the Kestrel drops vertically towards the ground, swooping to grab its prey in its talons and killing it with a swift bite. Kestrels can often be found hunting along the sides of roads and motorways. Kestrels also frequently use pylons or telegraph poles as vantage points to spot prey, saving themselves the effort of hovering.

Kestrels are bold and have adapted well to human encroachment, nesting in buildings and hunting by major roads.

In more northerly and westerly areas of Britain, kestrels often migrate south at the end of the breeding season, but return the following spring to form their territories. In winter many more kestrels visit from the Netherlands and Scandinavia.

The call of the Kestrel is a loud shrill ‘kee-kee-kee’, which can sometimes be confused with Nuthatch calls.

Kestrels nest on a ledge, in a tree hole or in a disused nest. Breeding begins April to may. The clutch of 3 – 6 eggs is incubated by the female and the chicks hatch after 27 – 31 days. The eggs measure around 39 millimetres by 32 millimetres. They are smooth and non-glossy and colored white or yellowish-buff with red-brown markings. Both adults feed the young birds, though the newly-hatched are usually fed by the female with the male hunting and bringing the food to the nest. Juveniles fledge after 27 – 39 days and disperse from their natal grounds in July – August and may travel up to 100 miles (150 kilometres).

The life span of a wild kestrel is around 10 years.

Kestrels are not considered to be globally threatened and are the commonest bird of prey in Europe, although kestrels have declined in Britain in the last few years.