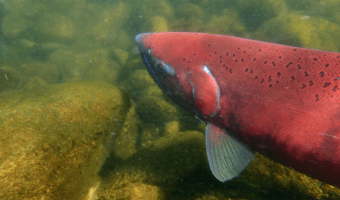 The king salmon (Oncorhynchus tshawytscha), also known as the Chinook salmon, Quinnat salmon, Tsumen, spring salmon, chrome hog, Blackmouth, and Tyee salmon, is the largest species of Pacific salmon in the genus Oncorhynchus. It is also the largest member of this genus.

This fish is native to the North Pacific Ocean and the river systems of western North America, ranging from California to Alaska, as well as Asian rivers ranging from northern Japan to the Palyavaam River in the Arctic northeast Siberia.

The king salmon is often caught for food, with the flesh being highly valued for its dietary nutritional content, which includes high levels of important omega-3 fatty acids. The fish is both farmed and caught in the wild. According to NOAA the Chinook salmon population along the California coast is declining, due to overfishing.

Nine populations of Chinook salmon are listed under the U.S. Endangered Species Act as either threatened or endangered. Despite this, the king salmon is listed as Least Concern by the IUCN Red List. 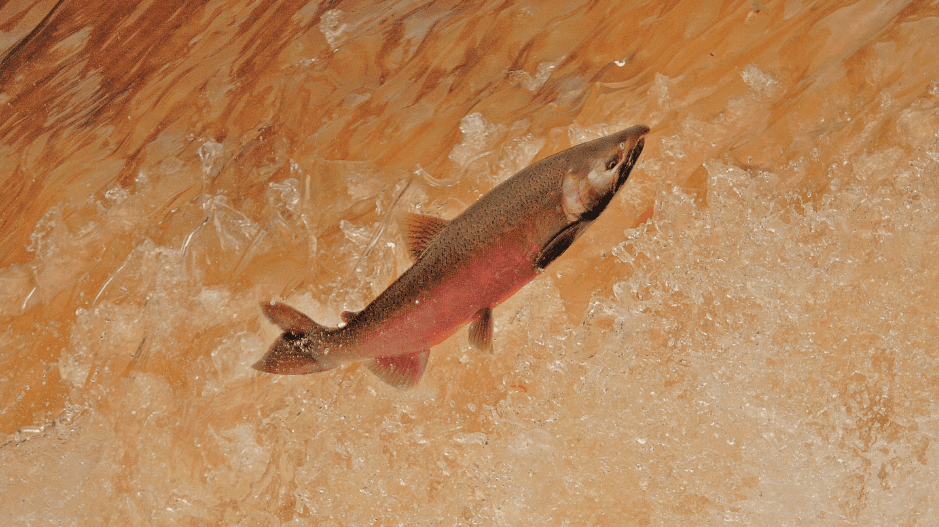 The king salmon is the largest of the Pacific salmon, ranging in size from 24 to 36 in (61 to 91 cm) in length and weighing 10 to 50 lb (4.5 to 22.7 kg). They are blue-green, red, or purple on the back and top of the head, with silvery sides and white ventral surfaces. There are also black spots on the tail and the upper half of the body, including the dorsal fin.

The Chinook salmon has an average lifespan of between four to six years. However, some can spend up to 8 years in the ocean or return after less than one year. Northern king salmon are likely to have longer lifespans than southern salmon.

King salmon are often killed due to predation, or because young who do not reach a certain size before their first winter at sea will not survive colder temperatures.

The king salmon’s diet changes depending on where they are living. In freshwater, as fry and smolts, they feed on plankton, aquatic insects, amphipods and crustaceans. After migrating to the ocean, the maturing adults feed on large zooplakton, herring, pilchard, sandlance and other fishes, squid, krill and crustaceans. Once the adult salmon have re-entered freshwater, they do not feed.

King salmon are anadromous, migrating out to the deepest parts of the ocean and returning as mature adults to their natal streams. Juvenile salmon grow in clean, productive estuarine environments and gain the energy for migration. Later, they change physiologically to live in salt water.

They may spend one to eight years in the ocean (averaging from three to four years) before returning to their home rivers to spawn. The salmon undergo 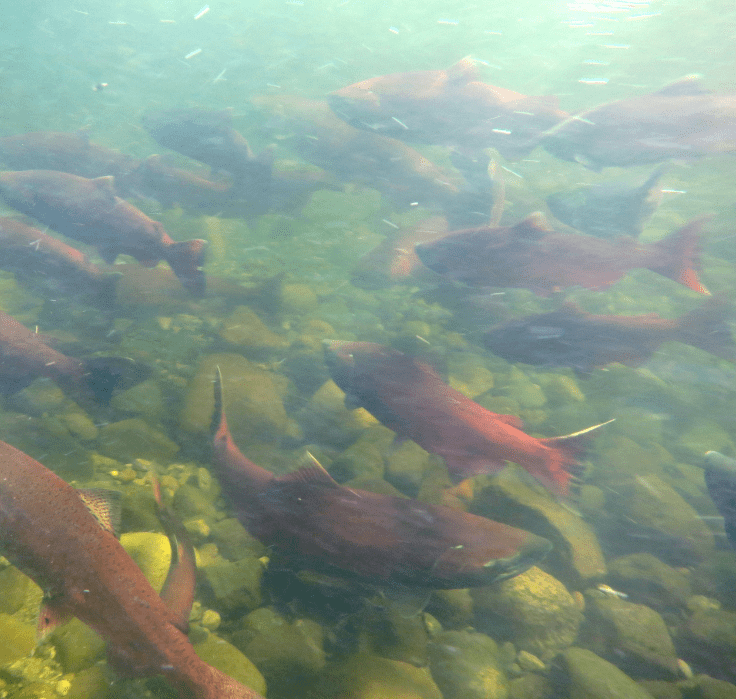 radical morphological changes as they prepare for the spawning event ahead, including a change in color. They need a healthy open ocean habitat to acquire the strength needed to travel back upstream, escape predators, and reproduce before dying.

King salmon all return to their natal streams and spawn at approximately the same time of year. They spawn in larger and deeper waters than other salmon species and can be found on the spawning redds (nests) from September to December. They use larger sediment (gravel) sizes for spawning than other Pacific salmon and clean, cool, oxygenated, sediment-free fresh water is essential for egg development.

During the courtship, which can last up to several hours, the male vibrates and crosses in front of the female, while the female is preparing for spawning by digging the redd. The female has been shown to selectively choose larger males, who vibrate more.

The female will then lay her eggs (3000-14000) in the nest, sometimes in 4-5 different packets within a single redd. The male then deposits his sperm, and both parents guard the redd until they die, which happens sometime within the next 25 days.

Chinook eggs hatch 90 to 150 days after deposition, depending upon water temperature, but always emerge in the spring. They will stay in fresh water 12 to 18 months before traveling downstream to estuaries, where they remain as smolts (spawn) for several months.

The king salmon juveniles divide into two types: ocean-type and stream-type. Ocean-type king salmon migrate to salt water in their first year, but stream-type salmon spend one full year in fresh water before migrating to the ocean.

While salmon are semalparous, and shortly after spawning they die, their decomposing carcasses provide necessary nutrients to the eggs and fry.

King salmon are native to the North Pacific Ocean from Monterey Bay, California to the Chukchi Sea, Alaska in North America and from the Anadyr River, Siberia to Hokkaido, Japan in Asia. This fish has also been introduced to places, such as the Great Lakes and New Zealand.

The king salmon is anadromous, meaning they are born in freshwater, migrate to the ocean, and return as mature adults to their natal streams to spawn. The streams in which they reside are relatively deep with course gravel and always freshwater. The water must be cool, around 14 degrees, for them to survive, and fast flowing.

Vegetation and woody debris within the stream are preferred, especially as they help juvenile salmon by providing cover and maintaining low water temperatures. The salmon rely on eelgrass and seaweeds for camouflage (as protection from predators), shelter, and foraging habitat as they make their way to the open ocean.

In the sea, the king salmon can be found close to the shore or very deep in the water. Algae is very important to their habitat, because increased algal levels lead to higher levels of carbon dioxide in the water, which transfers into living organisms, helping underwater plants to grow and small organisms to develop, which salmon eat. Algae also filters high levels of toxins and pollutants.

The king salmon is listed as least concern on the IUCN Red List, although some populations are threatened. Nine populations of Chinook salmon are listed under the U.S. Endangered Species Act as either threatened or endangered. They are particularly threatened by overfishing and habitat loss.

These fish are a popular food for humans, and they are both farmed and caught in the wild. The world’s largest producer and market supplier of the Chinook salmon is New Zealand.

Damming has also caused decline in these species because it blocks adults from returning to their birthplace and because smolts often get sucked into the turbines of hydroelectric dams and are killed.

As fry and smolts, king salmon are very likely to be preyed on. They are eaten by striped bass, American shad, sculpins and sea gulls. When they return to the freshwater to spawn as adults, they are also commonly preyed on by bears, orcas, sea lions, seals, otters, eagles, terns and cormorants. They are much less likely to be preyed on when they are at sea, but they can be attacked by large mammals such as killer whales.

To make it to sea successfully, they rely on eelgrass and seaweeds for camouflage so they can stay undetected by predators.