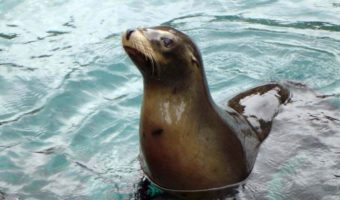 Sea lions are marine mammals and members of the suborder Pinnipedia (which in Latin means ‘fin-footed’ or ‘winged foot’). Together with the fur seals, they constitute the Otariidae family, collectively known as eared seals.

California Sea Lion – one most familiar sea lions. They are friendly animals often seen doing a variety of tricks in various locations while in captivity.

Steller Sea Lion – the largest of the species in the world. The males can be as long as 11 feet and weigh 2,500 pounds.

Australian Sea Lion – Males are dark brown with a light yellow mane around their heads.

Galapagos Sea Lion – very large, with the males being about 1,000 pounds when they are full grown.

Sea Lions are found in all sorts of waters except the Northern Atlantic Ocean. Some species live in sub arctic regions while others prefer warmer climates such as the Californian Sea Lion. 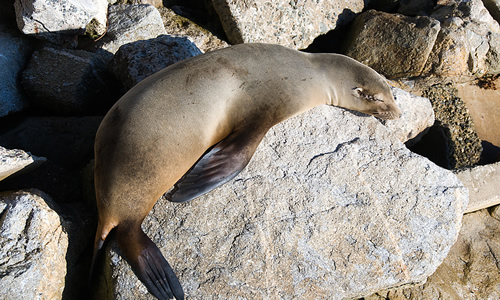 Sea lions have long torpedo shaped bodies that are suitably adapted to glide them through the water. They are also able to move around easily on land. Males are considerably larger than females. Males are very large and can weigh from 1,500 pounds up to 1 ton. They can measure up to 12 feet in length. Female sea lions are much smaller with a weight of 700 pounds and average about 9 feet in length.

Sea lions do not have very good eyesight and it is believed that they are nearsighted. There is evidence to indicate that Sea Lions can see better in the water than they can on land.

Sea Lions are generally found in huge colonies. They remain very close together both on land and in the ocean. The larger colonies may have sub colonies within them and the animals may move from one to the other at different stages of their lives. The colonies are often observed relaxing and basking in the sun on the shores or rocks. 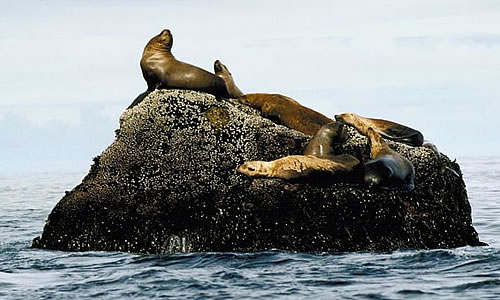 Sea Lions are capable of diving up to 600 feet when searching for food in the water. They can remain under the water for up to 40 minutes before they must surface for air. They are able to do this by pinching their nostrils together instinctively as they enter the water. Their nostrils will remain closed until the sea lion needs to take a breath air.

Sea Lions are considered to be highly intelligent animals. As well as being able to learn tricks, they have also been trained to help the United States Navy with their in water needs. Sea Lions are very timid creaturees, however, there have been some reports of aggressive attacks on humans. The males can be extremely aggressive when it comes to earning the right to mate with females.

Sea Lions are excellent swimmers and can reach speeds of 25 miles per hour. They generally swim at around 10 miles per hour but can increase to maximum speed when they feel threatened.

Sea Lions are known for their intelligence, playfulness, and noisy barking.

All Sea Lions are considered to be mammals as they give live birth to their young and the female sea lions nurse their pups with milk they produce in their bodies, just like female humans.

Males sea lions generally live alone and form harems during the breeding season that may last for several months. The male will protect his harem fiercely. When the larger colonies form again, the female sea lions with offspring are more likely to stay together. Once the pups are about a year old they tend to form small sub groups.

Female Sea Lions are pregnant when they come to shore to mate again. The female will give birth and then mate again for the next season within a couple weeks.

The gestation period for a female sea lion is 11 months. The pups are born on land and can weigh up to 50 pounds at birth. They can be 200 pounds and 6 feet in length by the time they are one year old.

The pups remain with their mother for about one year but often gather in groups with the other pups to play and engage in mock battles. When pups are a year old, they are known as ‘yearlings’.

The average life span in the wild for a Sea Lion is 18 years. In captivity they live an average of 23 years.

Sea Lions are classed as an Endangered Species. The hunting of Sea Lions is a huge threat to their survival. In some areas they are hunted as a source of food. The Sea Lion has only two other predators apart from man. They are sharks, in particular the Great White Shark and also Killer Whales. The Sea Lions are much more likely to encounter these predators when they have to further out into the waters to find food.

Sea Lions often suffer from an array of health problems associated with humans. They include pneumonia, epilepsy, and various types of cancers. Research shows that the pups are immune to such problems as long as they are fed milk from their mothers. Those that are in captivity from an early age may develop these problems in the first year and the only difference is the milk they are given.

The future is unsure for many species of Sea Lions. Years of them being destroyed by humans has taken a toll on them. Environmental concerns continue to cause problems for them in their natural habitats. The fact that humans are also taking control over the waters where they once lived in peace is also another huge concern. Even with conservation efforts in place there is still a great deal of work to be done if these animals are going to survive.

The Stellar Sea Lion is the largest of the 7 species.The New Zealand Sea Lion is the rarest of the species.There are many stories out there about seeing Sea Lions crying. What is actually taking place is that they have tear ducts to help remove the salt water from their eyes.