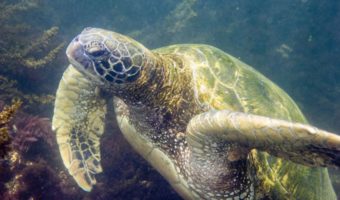 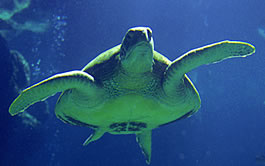 Green Sea Turtles are one of the most widespread species of marine turtle, found in tropical and subtropical waters throughout the globe. However, the Green Sea Turtle (Chelonia Mydas) is the only species of turtle that nests in the Galapagos Islands.

Research has revealed that the nesting colony in the Galapagos is the largest in the East Pacific.

The Green Sea Turtle was so named because of the green color of its body fat. The adult turtles algae diet is responsible for the color in its tissues.

Green Sea Turtles body is wonderfully adapted to life in the ocean. Their shells are lighter and more streamlined than those of their terrestrial counterparts and their front and rear limbs have evolved into flippers making them efficient and graceful swimmers, capable of swimming long distances in a relatively short period of time. Green Sea Turtles have been known to move through the water as fast as 35 miles per hour. The Turtles sometimes emerge on to land to bask in the sun.

Sea turtles have come up with an ingenious way to rid their bodies of the salts they accumulate from the seawater in which they live. Just behind each eye is a salt gland. Their salt glands help sea turtles to maintain a healthy water balance by shedding large ‘tears’ of excess salt. If a sea turtle appears to be ‘crying’ it is usually not cause for alarm, as the turtles are merely keeping their physiology in check. It is not because they are upset or sad.

Green Sea Turtles spend most of their life in the ocean. The males never leave the ocean, but the females come ashore to nest and lay eggs on several of the islands.

At night, the females dig pits on the sandy beach with their back flippers. They lay about 100 eggs and then they cover their pit. Green Sea Turtles leave the island and go back into the sea never returning to see their eggs. After the baby green sea turtles are about 6 months old, they start to eat algae and seaweed.

One of the turtles favourite food is sea grass and mangrove leaves. Some of the younger turtles like to eat jellyfish, algae, shrimp and crustaceans. When Green Sea Turtles are eating, they stay under water for 5 – 10 minutes. When they are resting, they can stay under the water for 2 and a half hours without coming up for air. Young turtles usually sleep on the surface of the water.

Several populations of this species exist and all are in a vulnerable state. Green Sea Turtles are an endangered species. Turtle eggs are eaten by introduced mammals. Pigs and other animals frequently destroy their nests. Hawks, Herons, Mockingbirds and Frigatebirds prey on young hatchlings. If these young turtles make it to the sea, fish and sharks hunt them also.