You are here: Home / Animals / Quolls 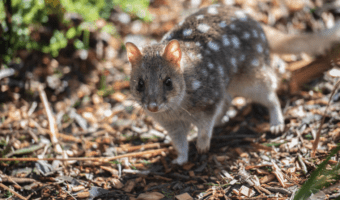 Quolls or Native Cats (genus Dasyurus) are one of 4 species of marsupials all from the same Genus. Although they are sometimes referred to as Native Cats, they are not related to true cats. They get their name from their cat-like appearance and predatory behaviour.

Quolls can be found in the forests around Australia. 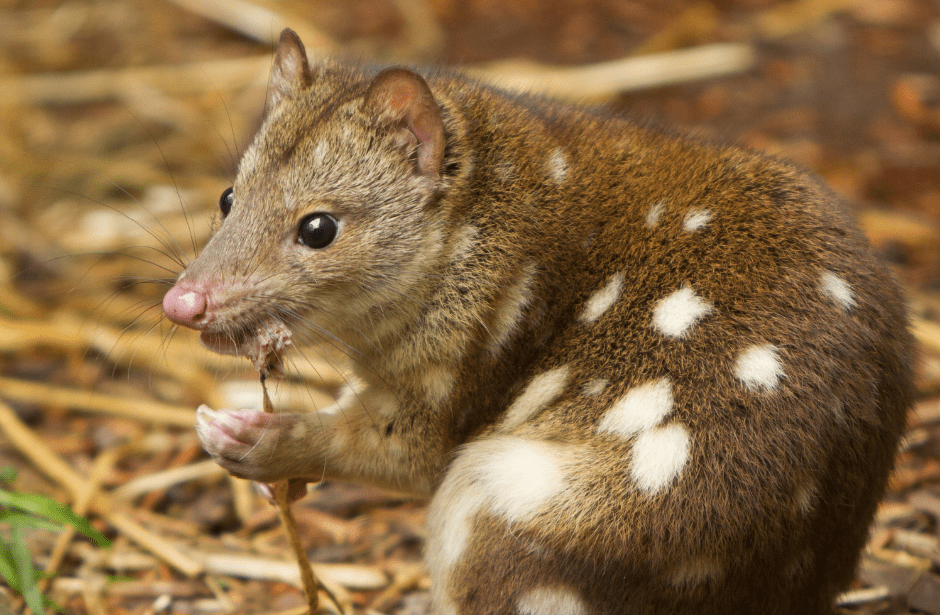 Quolls measure around 29 – 65 centimetres (11 – 26 inches) in length and weigh around 500 grams (1.1 pound). Female Quolls are slightly smaller than males. They have long, hairy tails that can measure 20 – 35 centimetres in length. The Spotted Tailed Quoll is the only species to have spots on its tail as well as its body. Although their tails are long, they are not prehensile. However, they do have ridges on the pads of their feet and their molars and canines are strongly developed.

All species of Quoll have grey to reddish/brown furry coats with white spots on. Female Quolls have 6 – 8 nipples and develop a pouch made by folds of skin on her stomach which opens towards the tail, only during the breeding season. Only the Spotted Tailed Quoll has a ‘true’ pouch. Quolls have small, bright eyes, a pointed snout with a moist, pink nose on the end of it.

Quolls preferred habitats are isolated forests and open valleys where they construct either nests or dens.

Quolls are generally carnivores and feed up on plants, fruit, small reptiles, rabbits, mice, rats, birds, insects and carrion. Quolls will also scavenge from rubbish bins. Larger species, such as the Spotted Tailed Quoll will prey up on larger mammals such as Bandicoots and Possums.

Quolls are generally ground-dwelling creatures, however, they have developed secondary arboreal characteristics. They are usually seen scuttling along the ground, but they also climb trees. They mainly hunt for prey at night and sometimes in daylight as well.

A Quolls home range is large and can extend for several kilometres in each direction from a small core range. The range of a male Quoll often overlaps the home range of several females. An interesting feature of their behaviour is the use of shared toilet sites in open spaces such as rock ledges, for marking their territory and other social functions.

Quolls are very unpopular with farmers because they have a tendency to raid Chicken coops. 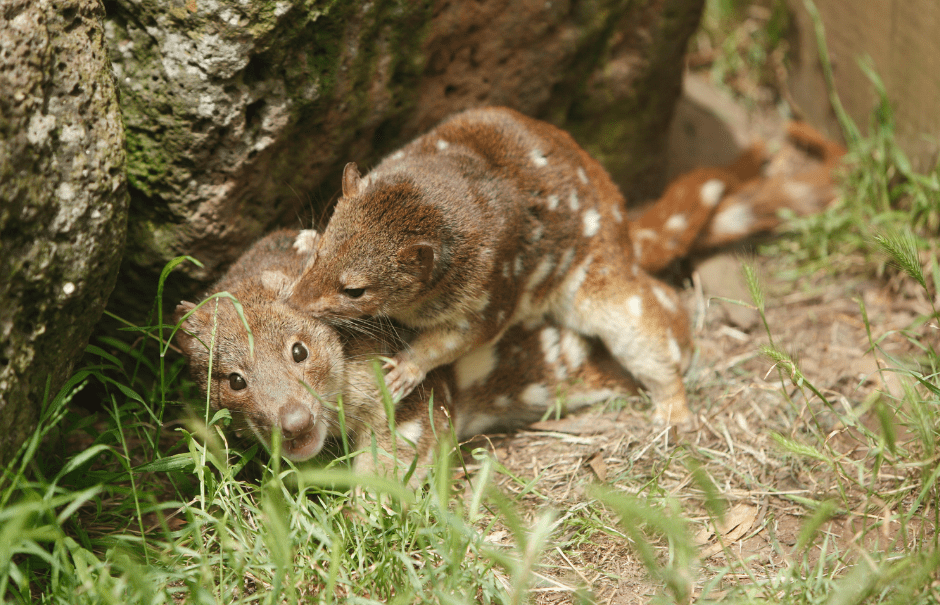 The Quoll reaches sexual maturity at one year. During breeding season (winter) and after mating with a male, the females pouch will develop ready to host her young. All 4 species of Quoll have a gestation period of 21 days. Quolls give birth to up to 18 under-developed young, however, only a third of these will survive as there are only 6 teats for the fortunate young to attach to.

The newborn Quolls are only around the size of a grain of rice. The surviving young spend their time in their mothers pouch, suckling milk from her teats. They will remain there for around 8 weeks after which time they will be carried on their mothers back and fed in a nest or den for a further 6 weeks until they are fully developed.

Quolls have a naturally short life span. Smaller species live only for around 2 years and larger species, like the Spotted Tailed Quoll, 4 – 5 years.

Quolls are classed as an ‘Endangered Species’. The Quoll population as been on the decline due to habitat loss and competition from Cats and Foxes.