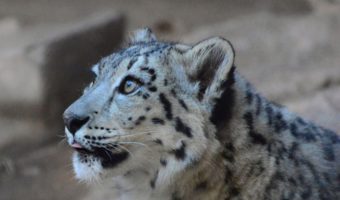 The Snow Leopard is sometimes known as the ‘Ounce’. It is a large cat native to the mountain ranges of Central Asia and well known for its beautiful fur. The snow leopards range in central and south Asia is rugged mountainous regions of approximately 1,230,000 square kilometres, which extends through 12 countries: Afghanistan, Bhutan, China, India, Kazakhstan, the Kyrgyz Republic, Mongolia, Nepal, Pakistan, Russia, Tajikistan, and Uzbekistan.

Although sharing its name with the common leopard, the snow leopard is not believed to be closely related to the Leopard or the other members of the Pantherine group and is classified as the sole member of the genus ‘Uncia uncia’. 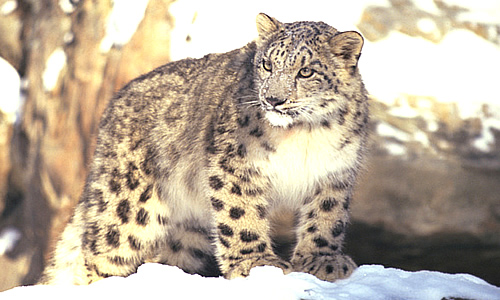 The Snow Leopard has a white fur coat with brownish/yellow tinges that is covered with rings of brown/black rosettes/spots. The markings help camouflage it from prey. Their fur is long and woolly and helps protect the cat from extreme cold. Snow Leopards have heavy fur on their tail and the bottom of their paws are covered with fur for protection against the cold snow.

The snow leopards head, which has small ears and a distinctive heavy brow, is rounded and comparatively small for their body size, which can be up to 1.3 metres in length and weigh up to around 70 kilograms. Their long tail, which can measure as much as 90 centimetres, helps the cats balance as they move over rugged and often snowy terrain. The powerful limbs of the snow leopard are relatively short for their body size and are supported by large, powerful paws.

Due to the under-development of the fibro-elastic tissue that forms part of the vocal apparatus, the snow leopard cannot give a full, deep roar and this along with differences in skull characteristics help to separate them from their fellow ‘big cats’.

During the summer, the snow leopard inhabits mountainous meadows above the tree line in rocky alpine regions at an altitude of 2,700 metres (8,900 feet) to 6,000 metres (20,000 feet). In winter, snow leopards descend to forests at lower altitudes.

Snow Leopards are opportunists when it comes to feeding. They are strictly carnivores and eat whatever meat they can find. One of the most beautiful of the cats, snow leopards are also exceptional athletes capable of making huge leaps over ravines. They can also bring down prey almost three times their own size including domestic livestock. Their prey includes the ibex, markhor, bharal, deer, boar, marmots, pikas and small rodents.

The snow leopard is an ambush predator and will attack its prey from above when possible. It is an agile animal that can jump as far as 14 metres which helps it catch prey and traverse through the mountains. It is common that the snow leopard will remain close to its kill and return over a period of 3 to 4 days to feed.

Snow Leopards are crepuscular (active at dawn and dusk) in their hunting activities. Commonly, the cat is a solitary hunter, however, it may share the task with its mate during breeding season.

The gestation period for the female snow leopard is around 98 days. Due to harsh weather conditions in the alpine regions, cubs are usually born in springtime with mating taking place in late winter. This ensures that a food source is abundant and less effort is needed to secure a kill. Females give birth in rocky dens lined with their fur. The litter size is usually between 1 – 4 cubs. The cubs weigh between 320 – 708 grams at birth and have a daily average weight gain of approximately 48 grams per day. The cubs follow their mother on hunts at 3 months old and remain with her through their first winter.

In 1972, the IUCN placed the snow leopard on its Red List of Threatened Species as ‘Endangered’. Due to the high demand for their coats, snow leopards are illegally hunted for the fur trade. The pelts are a sought-after commodity in places like Central Asia, Eastern Europe and Russia where they are turned into coats and other garments. Snow leopard bones and body parts are also used for traditional Asian medicine.