Are you a fan of the Marvel movies? Are you looking for a cool name for your new pet inspired by your favorite Marvel character?

The Marvel Cinematic Universe (MCU) is an American media franchise and shared universe that is centered on a series of superhero films, independently produced by Marvel Studios and based on characters that appeared in American comic books published by Marvel Comics. The franchise has expanded to include comic books, short films, television shows, and digital series.

The first film in the Marvel Cinematic Universe was Iron Man (2008), which began the first phase of films culminating in the crossover film The Avengers (2012). Phase Two began with Iron Man 3 (2013), and concluded with Ant-Man (2015). Phase Three began with Captain America: Civil War (2016), and concluded with Spiderman Far from Home (2019). The films have been distributed by Walt Disney Studios Motion Pictures.

The MCU has been critically acclaimed and has grossed over $25 billion at the global box office. It is the highest-grossing film franchise of all time. 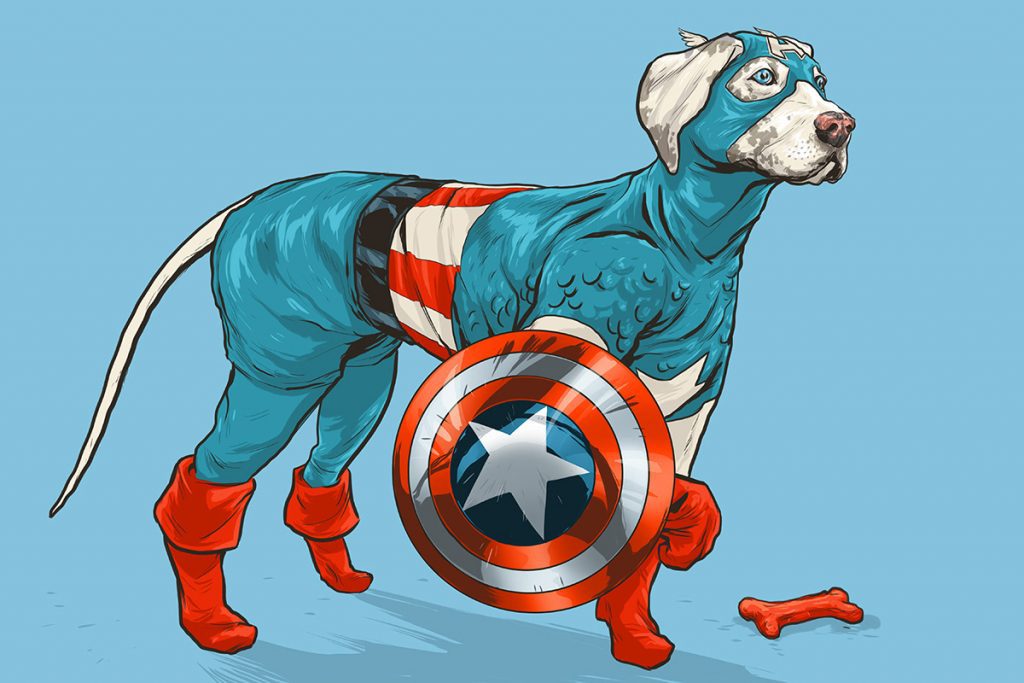 Below are a list of cool Marvel names that will suit your new pet:

Thor is the God of Thunder and a Marvel superhero. Known for his strength and guile Thor would be a great name for a large breed dog or cat.

Loki is the brother of Thor and a well-known trickster in Norse Mythology. If you have a sly and mischievous pet on your hands then he might just be a “Loki”.

Hulk is the strongest Avenger, powerful, muscular, and green. A great name for a big muscular dog such as a Pitbull or perhaps even a green lizard. His real name is Bruce Banner – Bruce and Banner would also be great names for a pet dog.

Black Widow is a Marvel character and part of the Avengers. She is a deadly spy and assassin and would suit a stealthy pet such as a cat.

Hawkeye, real name Clint Barton, is an expert archer and long-serving member of SHIELD. If you have a loyal companion then Clint or Hawkeye might be a good name for your pet.

Lucky the Pizza dog is Hawkeye’s one-eyed Golden Retriever who eats far too much pizza. Lucky would be a great name for your new Golden retriever although all that pizza would not be a great diet for your new pup.

Iron Man, aka Tony Stark, genius, billionaire, playboy, and philanthropist, uses his intellect and armored suit technology to fight against threats in the MCU.

Captain America aka Steve Rodgers, is a World War Two veteran and leader of the Avengers.

The Winter Soldier aka Bucky Barnes is the best friend of Steve Rodgers until he was captured by Hydra and turned into a weapon. Bucky would be a great name for a pet.

Black Panther, real name T’Challa, is the prince and protector of Wakanda.

Shuri is the sister of T’Challa, she is one of the most intelligent people in the Marvel Universe and may be considered more intelligent than Tony Stark and Bruce Banner. If you have a smart female dog then Shuri would be a great name.

Okoye is a brave warrior and she leads the Wakandan army. Okoye would be a great name for a female pet cat or dog.

Killmonger is a former special ops soldier and the cousin of Black Panther. A tough name for a guard dog such as a rottweiler or Doberman.

Spider-man, sometimes called Spidey by fans of the MCU, might be a great name for an exotic pet such as a Tarantula spider. His real name is Peter Parker, Parker is a short two-syllable name that would be good for a dog whose owner is a Spider-man fan.

Flash Thompson appears in many Spider-man comics and movies. Flash would be a great name for a pet if you’re a fan of Spider-man.

Kingpin is a crime boss in Marvel and would make a good name for a pet that thinks it is in charge.

Prowler is an enemy of Spider-man and works for Kingpin – would be a great name for a male cat.

Ant-Man can make himself smaller than an ant using his special suit and Pym particle technology. A great name for a small pet such as a hamster.

Wasp has similar powers to Ant-Man and shrinks incredibly small. Ant-Man and The Wasp might be a cute naming for a pair of small rodent pets.

Captain Marvel, Carol Danvers, is probably the most powerful of the Avengers and developed her superpowers when she came into contact with Kree technology. Marvel would be a great name for a pet of a Marvel fan.

Nick Fury is the head of SHIELD and it was his idea to bring the Avengers together.

Wolverine, aka Logan, is probably the most famous character in the X-men. His name would suit a wolf-dog breed.

Phoenix is an alias of Jean Grey the original Marvel girl. A phoenix is a beautiful, mythical bird.

Beast is an imposing character with super strength and agility. He is also a highly intelligent scientist and inventor. Beast is a tough pet name.

Nightcrawler is a member of the X-men; a great name for a cat or nocturnal pet.

Storm has the power to control the weather and she is a key member of the X-Men. Storm is a popular name for a female dog or cat.

Rogue is a popular female member of the X-men and can take on the powers of other mutants.

Gambit, Remy LeBeau, a love interest of Rogue and a popular member of the X-men. The character was created by writer Chris Claremont and artist Jim Lee

Colossus is a super-strong mutant with impenetrable metal skin. A cool name for a big grey or silver pet like a silver lab.

Professor X, Charles Xavier, the leader of the X-men. Created by Stan Lee and Jack Kirby, the character first appeared in The X-Men #1.

Magneto is the leader of the Brotherhood of Mutants who regularly clash with the X-men.

Sabretooth is the brother of Wolverine and a follower of Magneto.

Juggernaut is a giant brute of a Mutant that can’t be stopped once he gets moving.

Mystique is a follower of Magneto and can transform herself into other people. Mystique is a great name for a cat.

Thanos is an alien who wanted to destroy half of all life in the Universe. He is a large imposing figure and would be a great name for a large dog breed.

Ultron is a villainous AI robot that was accidentally created by Tony Stark and Bruce Banner.

Vision is a synthetic being created by Ultron. He joins the Avengers to fight against Ultron.

Scarlet Witch, real name Wanda Maximoff, has magical powers and is a love interest of Vision. Wanda is a two syllable name which is suitable for a female dog.

Quicksilver is the brother of the Scarlet Witch with super-human speed. If you have a fast pet such as a Whippet or Greyhound then this might be a cool name.

Deadpool, the Merc with the Mouth, is a Marvel anti-hero. His real name is Wade Wilson so if you have a pet that never shuts up then this might be a source of inspiration.

Star-Lord, Peter Quill, is the wise-cracking half-human leader of the Guardians of the Galaxy.

Drax is a strong muscular alien that takes things far too literally.

Groot is a living tree-like alien with a very limited vocabulary. What a great name for a pet Stick Insect.

Gamora is a skillful fighter and adopted daughter of Thanos. A great name for a female pet.

Nebula is the sister of Gamora and a trained assassin. The name Nebula would suit a feline.

Rocket is a member of the Guardians. He is a talking raccoon with an attitude. A great name for a pet rodent or teddy-bear dog breed.

Nova is a member of the Nova Corps, a sort of intergalactic police force. Could be a cool name for a police dog.

Daredevil is the blind lawyer with superhuman senses who protects the people of Hell’s Kitchen in New York.

Luke Cage is a super strong member of the Defenders. Cage would be a good name for a big guard dog like a Rottweiler.

What to Consider When Picking a Marvel Pet Name

If you’re looking for a name for your dog, cat, or other furry friends, here are some tips on how to pick a Marvel name that’s suitable for your pet.

1. Consider your pet’s personality. What kind of personality does your pet have? Is your dog playful and energetic like Spider-Man, or is he more laid back? Naming your pet after a Marvel character can help you capture their personality.

2. Choose a name that’s easy to say. You’ll be saying your pet’s name a lot, so you want to choose something easy to pronounce. Avoid names that are too long or difficult to say or understand.

3. Make sure the name isn’t too similar to another family member’s name. You don’t want to confuse your pet when you’re calling them. Also, avoid names that sound like a command you don’t want to be shouting for your dog “Gambit” and he just sits in the field.

5. Pay homage to your favorite Marvel character. If you’re a big fan of the Avengers, why not name your pet after one of your favorite heroes? Or if you’re more into the X-Men, there are plenty of mutant names to choose from.

No matter what name you choose, your pet is sure to love it. And with a little bit of creativity, you can find the perfect Marvel pet name for your furry friend.

There is a team of Avengers made up of animals.In 2009, Marvel published a four-issue comic book limited series called Lockjaw and the Pet Avengers Unleashed. The team consists of several animal companions related to superheroes in the Marvel Comics universe.This team includes animal companions such as Lockjaw, Throg, Redwing, Lockheed, Hairball, and Ms. Lion.