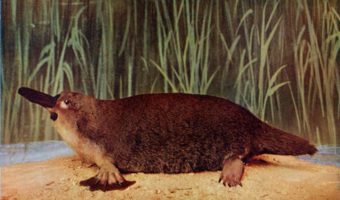 The Duck-billed Platypus (Ornithorhynchus anatinus) is a semi-aquatic mammal endemic to eastern Australia, including Tasmania. The Platypus is one of the few venomous mammals whereby the male Platypus has a spike on the hind foot which delivers a venom capable of causing severe pain to humans, they also use it to kill small animals in self defence. Female Platypus are not venomous.

The Duck-billed Platypus is about the size of a cat. It has thick, waterproof fur all over its body (except for the feet and bill) that insulates the animal and keeps it warm. Their legs sprawl out to the side of the body, giving it a lizard-like walk.

The Duck-billed Platypus uses its tail for storage of fat reserves, an adaptation it shares with the Tasmanian Devil. The Duck-billed Platypus has webbed feet and a large, rubbery snout. These are features that appear closer to those of a duck than to those of any known mammal. The webbing is more significant on the front feet and is folded back when walking on land. Unlike a birds beak (in which both the upper and lower parts of the beak separate to reveal its mouth), the snout of the Platypus is a sensory organ with the mouth on the underside. Their nostrils are located on the dorsal surface of the snout while the eyes and ears are located in a groove set just back from it. This groove is closed when swimming. Platypuses have been heard to emit a low growl when disturbed and a range of other vocalisations have been reported in captive specimens.

The weight of the Duck-billed Platypus varies considerably from 700 grams (1.54 pounds) to 2.4 kilograms (5.3 pounds) with males being larger than females. Males average 50 centimetres (20 inches) total length while females average 43 centimetres (17 inches). There is a great variation in size depending on the region in which the Platypus lives, and this pattern does not seem to follow any particular climate rule and may be due to other environmental factors such as predation and human residence. The Platypus has extra bones in the shoulder girdle which are not found in any other mammals.

The Platypus can determine the direction of an electric source, perhaps by comparing differences in signal strength across the sheet of electro receptors. This would explain the anima’s characteristic side-to-side motion of its head while hunting.

The Platypus feeds by digging in the bottom of streams with its bill. The electro receptors could be used to distinguish live and dead objects in this situation. When disturbed, its prey would generate tiny electrical currents in their muscular contractions which the sensitive electro receptors of the Platypus could detect. Experiments have shown that the Platypus will even react to an ‘artificial shrimp’ if a small electrical current is passed through it.

Platypus are carnivores (meat-eaters) and they use their bill to strain its tiny prey, like crayfish, worms, insects, snails and shrimp from muddy water. The Duck-billed Platypus can store food in cheek pouches while it is hunting underwater.

Duck-billed Platypuses live in burrows and spend much of their time in freshwater ponds and streams.

The Platypus is generally regarded as nocturnal and crepuscular (animals that are primarily active during the twilight), but individuals are also active during the day, particularly when the sky is overcast. It tends to habitat bridges rivers and the riparian zone (the interface between land and a flowing surface water body) for both a food supply of prey species and banks where it can dig resting and nesting burrows. It may have a range of up to 7 kilometres (4.4 miles) with males home ranges overlapping with those of 3 or 4 females.

Together with the four species of echidna, the Duck-billed Platypus is one of the five extant species of monotremes, the only mammals that lay eggs instead of giving birth to live young. After an egg hatches, the tiny baby platypus (called a puggle) drinks its mothers milk, which comes from tiny openings in the mothers belly. Duck-billed Platypuses have a life span of 10 – 17 years.

The male Platypus has venomous ankle spurs which produce a cocktail of venom, composed largely of defensin-like proteins (DLPs), which is unique to the Platypus. Although powerful enough to kill smaller animals, the venom is not lethal to humans, but does produce excruciating pain. So intense is the pain that the victim may be immobilized. Swelling rapidly develops around the wound and gradually spreads throughout the affected limb. The pain develops into a long-lasting hyperalgesia (an extreme sensitivity to pain) that persists for days or even months. Venom is produced in the crural glands of the male, which are kidney-shaped alveolar glands (general anatomical term for a concave cavity) connected by a thin-walled duct to a calcaneus spur on each hind limb. The female Platypus, in common with echidnas (the only surviving monotremes apart from the Platypus), has rudimentary spur buds which do not develop (dropping off before the end of their first year) and lack functional crural glands.

The venom appears to have a different function from those produced by non-mammalian species. The venoms effects are non-life threatening but nevertheless powerful enough to seriously impair the victim. Since only males produce venom and production rises during the breeding season it is thought that it is used as an offensive weapon to assert dominance during this period.

Until the early 20th century the Duck-billed Platypus was hunted for its fur, however, it is now protected throughout its range. Although captive breeding programs have had only limited success and the Platypus is vulnerable to the effects of pollution, it is not under any immediate threat.