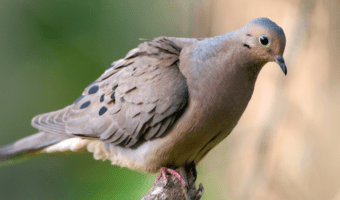 The Mourning Dove (Zenaida macroura), has been known by many names historically, and is one of the most common and widespread birds in North America. They can be found as far north as Southern Canada, abundantly through The USA, and outside of breeding season they can also be found in Central America.

Also known as the ‘American mourning dove’, or the ‘Turtle dove‘, this bird is a common sight in both rural and urban areas. It feeds mostly on seeds and small insects and usually nests near the ground in shrubs, tree hollows, or in man-made structures.

Some argue that the Mourning Dove, along with its close relatives the Eared Dove (Zenaida auriculata) and the Socorro Dove (Zenaida graysoni) are actually superspecies, and belong in their own, separate genus Zenaidura. However, this is not currently the accepted taxonomy for these birds.

They are typically small, plump, grayish-brown birds, with a long, tapered tail, a small head and a short, slender bill. The underside of their long, pointed wings are a rosy-pink color, and the tips of their wings are black. They have a distinctive black spotting pattern on their wings and back, as well as black markings around the eyes. Males are known for making a low, soft and mournful ‘whooo-OO-hoo-hoo’ call.

They have four toes in their feet, with one of them reversed to allow for a good, solid grip. Females tend to have more brown in their coloring and juveniles are darker.

The range of the Mourning Dove, spans across the entire United States, Central America, much of the Antilles and Caribbean Islands and they have also been introduced to the Hawaiian Islands. Populations can be found year round in the USA, but those that breed in the northern states or into Canada, migrate to the far south, into the southern countries of Central America outside of breeding season.

Mourning Doves are very adaptable and live in a variety of different habitats within their range. They are often found in areas where food is in good supply, and that includes urban and suburban environments. They are a common sight on residential rooftops or in parklands, as well as around farms or along roadsides, perched up high on poles or lines.

They can be found in dense or lightly wooded areas, or semi-open with good visibility but also plenty of space for nesting. When it comes to nesting, they will set up home almost anywhere. When breeding, nests have been found in old barns and rooftops, but are most commonly found in dense areas of deciduous or conifer forest. Again, it depends greatly on their particular habitat within their range.

The Mourning Dove have a mostly herbivorous diet, feeding largely on seeds and other grains. In fact in most cases, seeds and grains can make up to around 99% of their diet. They do however, also eat small insects such as snails, worms and ants, so they are technically omnivores. They are typically ground feeders, but will also eat in low shrubbery and visit bird feeders.

More often than not, they will hoover up any fallen seeds from smaller birds pecking at a feeder, rather than attempt to balance at the feeder themselves. This depends on the type of feeder of course.

Mourning doves can be migratory and non-migratory. Those that breed in the northern part of the range are those that migrate the farthest when outside the breeding season.

It is the males call to attract a mate that is the most distinctive vocalization that these birds make. They can often be heard making this call early in the morning, and is often mistaken for the call of an owl. Other vocalizations include a nesting call that bonded males are known to make to attract their partner to the potential nesting area.

Both males and females are also known to display a distinctive call when they, or their nest are under threat. Other defensive behaviours include the act of faking injury on the ground to distract a predator away from their nest. When the predator approaches, distracted from the nest, the dove will fly away to safety, in the hope that the distraction is enough to save their nest.

When not breeding and in the nest, these birds are known to roost communally, preferring thicker, wooded cover when they do this.

Mourning Doves are typically monogamous and mate for life, though there is evidence of some polygyny in the species. During the breeding season, the male Mourning Dove will perform their first act of courtship in a noisy flight, followed by a courtship dance for the female, bobbing its head and cooing loudly. It’s a similar ritual to that observed in pigeons.

Breeding season peaks between April – July, but can last until October, depending on where they are in the range, and environmental factors. Females can lay eggs as many as 6 times in a season!

Males will find a nesting site, usually around March, and the females will build the nest with material that the male gathers for her. The nest is usually located in the branches of a tree, though occasionally in shrubs, hedges or on rooftops and unoccupied buildings.

Once mated and fertilized, the female will lay one or two (usually two) white eggs, which both parents take turns incubating. The parents are very attentive and there is rarely any occasion when at least one parent isn’t present. The chicks hatch after 14-19 days of incubation, and survive for the first few days on a diet of crop milk, which either parent can provide. After around 4 days they will start eating solid food – seeds and grains – too.

Baby doves, similarly to baby pigeons, are called ‘squabs’. They will fledge the nest after around 10- 15 days but stay close by to their parents for around a further two weeks. Their parents can top up their food and offer a level of protection during this time, while they get used to the world.

Juveniles will have their first molt around 3 months of age, and around every 14 days after that. Sexual maturity comes at around the same time as their first molt, and they are soon to find a partner after that. They can have several broods in a season, and in the wild, the average lifespan is around 4-5 years. They are known to live much longer in captivity, where there are much less threats.

There are many predators of Mourning Doves, both in the nest and as adults. Out of their nest, the biggest threats are large birds of prey such as hawks, diurnal owls and large falcons. Cats are also a threat both out of and in the nest. They will stalk and pounce, or sneak up to a nest with little mercy.

Other predators that will gladly raid a nest, include some medium sized birds such as corvids and grackles. They will happily eat eggs as well as young birds given the chance. Some snakes, for example rat snakes, are also regular nest raiders.

Humans are also a major predator for Mourning Doves, responsible for millions of kills every year. Lead poisoning from hunting ammunition pellets, that is spread across the ground in hunting fields, is also a threat to these birds. They will eat these pellets from the ground, become toxic and die. Ultimately, humans in more ways than one, are the biggest threat to this species.

Other than predation and human activity, the Mourning Dove is also susceptible to a range of parasites and diseases including tapeworms, mites, and lice. The Avian Pox is also a real risk to the Mourning Dove. They can get this from a few sources, mosquito bites are a common cause. Once a bird has the disease, it can spread like wildfire through a population, and if they carry this during migration, they can spread the pox far and wide.

Two of the major issues that come from Avian Pox, other than increased early mortality, is reduced success at reproduction, and risk of secondary infections.

The Mourning Dove is considered to be a species of Least Concern on the IUCN Red List. Populations are abundant and secure. It is estimated that they numbered over 425 million across their range in the 1990’s and the population has slightly increased since that time.

They are however, a gamebird, and hunted in large numbers for sport and food each year. There are an average of 20 million birds killed each year, and that number increases to between 40-70 million on some years. Despite this, populations are well managed and secure.

There are recent concerns though, raised through a North American breeding bird survey, that populations are in a slight declining trend across much of the western and central United States.

Amazing Facts About The Mourning Dove