You are here: Home / Animals / Wombat 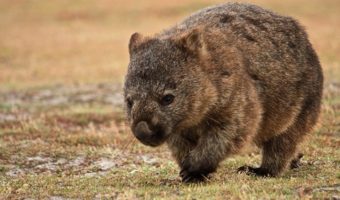 Wombats (Family: Vombatidae) are small bear-like marsupials found throughout south eastern Australia and Tasmania. They are more closely related to the Koala Bear, however, they are unable to climb trees.

Unlike bears, wombats are not predators but shy, timid animals that can make good, playful and affectionate pets.

A wombats fur can vary in color from a sandy brown, grey to black. The Common Wombat can be distinguished from the other 2 species by its hairless nose and rounded ears. Being burrowing marsupials, wombats differ in that their pouches face backwards so that the young are protected from flying dirt when the female is digging.

Wombats have a thick leathery skin on their rump which they use to block burrow entrances against predators.

The preferred habitats of a wombat is hilly or mountainous coastal country, creeks and gullies.

Wombats are herbivores and feed up on grass, roots of shrubs and tress and fungi. They can graze for up to 8 hours a night and travel quite far from their burrows in search of food.

Wombats are burrowers and will dig out burrows measuring 30 metres (100 feet) long. Burrows will have one entrance but may branch out into different chambers. The wombat makes its nest in one of these chambers and it will be lined with grass, bark and leaves.

Wombats are usually nocturnal but will sometimes bask in the sun in specially prepared spots close to the entrance of its burrow. Wombats live in large home ranges and although they tend to be solitary, neighbouring territories can overlap considerably.

Although wombats are sometimes aggressive towards each other in captivity, some observations suggest that they often make visits to each others burrows in the wild. When a wombat is startled or threatened, they can flee at around 25 miles per hour and maintain this speed for up to 90 seconds. Main predators of wombats are Tasmanian Devils and Dingoes.

Wombats reach sexual maturity at 2 years of age. Births occur in late Autumn when 1 – 2 young are born after a gestation period of 20 – 28 days. Like all marsupials, wombat babies (joeys) are born under-developed and immediately enter its mother’s pouch where it will stay attached to a teat, suckling milk, until it is fully developed. The young usually leave the pouch when they are 6 – 7 months old and are weaned after 15 months.

Wombats are a protected species but are persecuted in some regions for being vermin. Common wombats are classified by the IUCN Red List as a species of least concern. Northern Hairy-nosed Wombats (Lasiorhinus krefftii) are a critically endangered species and considered close to extinction. They are now very rare with only a small population in a National Park in Central Queensland. Their severe decline is due to loss of habitat to cattle. The Southern Hairy-nosed Wombat is also an endangered species.